Landscape is Destiny: A Talk with Historian Vernon Benjamin 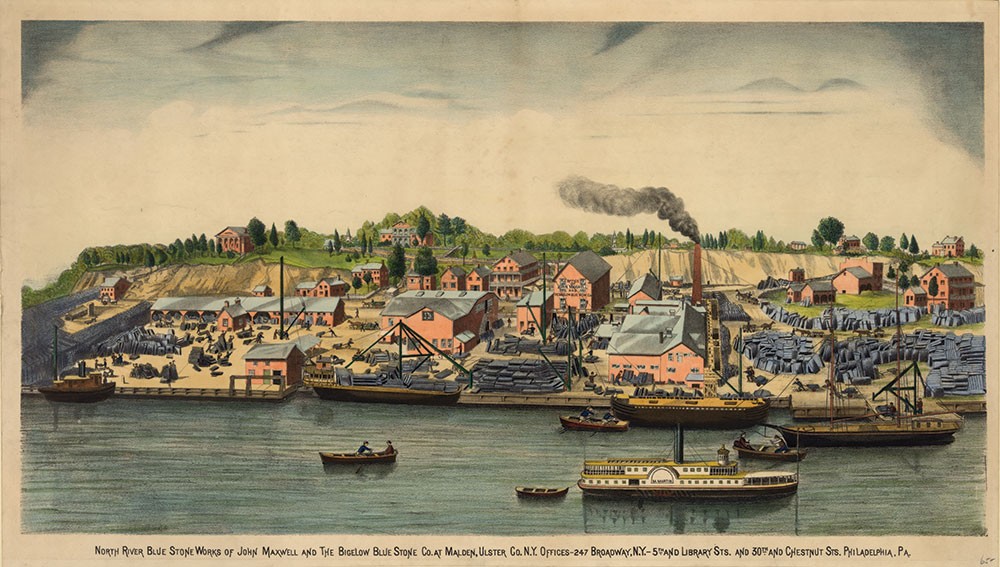 "Labor of love" is a term far more bandied about that it probably deserves, but in the case of Vernon Benjamin's prodigious, two-volume history of the Hudson Valley, it's entirely accurate: the author's love for this place is as abundant as the book's page count. The second volume, The History of the Hudson River Valley: From the Civil War to Modern Times (Overlook Press, 2016) is a fittingly obsessive chronicle of the further populating of this remarkable place.

Benjamin may well be the perfect person to write it: a Saugerties native son, he was a student of history and cultural studies who worked in state, local and county governments. (He also had a long association with Maurice D. Hinchey and served three terms as a county legislator.) He started out tincanning it as a freelancer and writing local journalism, and never lost his ability to pull a tale out of a fact or connect a story to a face.

I talked to him one hazy summer afternoon at Inquiring Minds in Saugerties, where he's a regular. People came up to greet him; the manager apologized to him for having sold out of his books. Benjamin knows everyone, and if he doesn't know them, you get the impression he will soon. We covered the past, the present, the strange combination of respectability and eccentricity that marks this place, and what comes next. Vernon Benjamin will be speaking at a number of events during the month of September. For a full listing, visit Chronogram.com

Together with the first volume (From Wilderness to the Civil War) there's over a thousand pages of Hudson Valley history. It's a tremendous undertaking. What prompted you to do it?

Spider Barbour, the great Saugerties naturalist and a friend, recommended me to Peter Mayer, then CEO of Viking-Penguin. Mayer called to see if I would be interested in writing a history of the Hudson Valley. At one point he said to me, "You can do this, can't you?" I blurted out, "I was born to do this!" and immediately felt embarrassed. What did I know what I was born for? No one had done anything like this before. There was a Hudson Valley history published out of Chicago in 1931, but in the old style. The editor, Nelson Greene, asked local communities to send him historical materials, and he put it together under a single editorial style. It was pretty good, but not a critical history.

It's certainly a lot to learn—and you cover everything.

Warts was my mantra, even the need to tackle topics that were foreign to me — geology, for instance. But I lucked out. I found an obscure library in the Geological Survey in Albany and spent three months there going through about 180 books, pamphlets, maps, and other learned exegeses.

It reminds me of Alf Evers' Woodstock and Catskills books: a similar dedication to bringing the history of this place to life via the people in it, no matter the time or pages it takes.

Alf and I were friends, and we have similar backgrounds. Like him, my first job was investigating people and writing biographies of them for insurance and stock market companies. And Alf knew what I was doing—we talked about it. When I think about how he wrote those books, I'm amazed that he did those without a computer. How on earth did he keep track of all that information? When I was writing this, the first chapter I sent to Peter originally had 270 footnotes in it.

What is it about this place that made you want to take, oh, about 20 years to write about it?

I think it's summed up in the phrase Congress used when they designated the Hudson Valley National Heritage Area in 1996: "The landscape that defined America." The Valley played an incredible role not just in the American Revolution, but as the proving ground for American democracy and the fountainhead of American romanticism. So much happened here. In the Gilded Age, the captains of industry—the "malefactors of great wealth" as Teddy Roosevelt called them—came home to the Hudson Valley after their labors in the city. And the rise of the NAACP happened here in Amenia, in 1916, a coming together of black national interests and goals that ultimately led to Brown v. Board of Education in 1954.