A 19th century house gets an artists' restoration 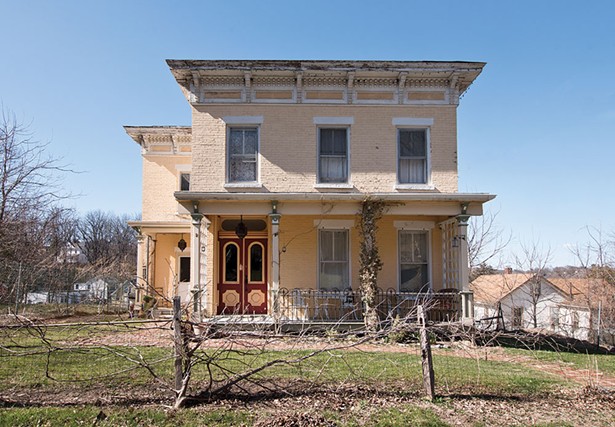 Step inside the historic, Italianate home in Catskill that was recently renovated to its former beauty.

Uneven floors are a deal breaker for me," Laleh Khorramian says as she shows me around her mostly level and completely charming, yellow brick home. First and foremost a painter, her sometimes surrealistic, sometimes playful, sometimes dark vision has also manifested in collage, lo-fi animations, portraiture, as well as clothing and costume design. (She's also one third of the Viennese punk rock trio BAucH BeiN Po.) And Khorramian's been thoroughly enjoying her latest creative endeavor: the ongoing renovation and restoration of her new, old house. Built in 1840, the 2400-square-foot home features many of the classic details characteristic of the Italianate architecture favored by the whaling captains and well-to-do of Catskill and Hudson's 19th-century heyday, including generous overhanging eves with ornate, curving cornices, detailed brickwork, glass-paned double front doors topped with arching romanesque "hood molds," and a small, raised porch with beveled columns and carved molding. Inside, Khorramian's talent for creating her own distinctive world—whether in a gallery or store, whether within an animated landscape or the intimate feel of a hand-painted evening gown—makes evident that evoking an inviting and comfortable environment comes naturally to her. "I have to make a sanctuary out of wherever I live and even stay," Khorramian explains. "I care about how a place looks; I care about how things feel; I care about the world I live in. Even if I go camping, I'm going to deck the tent out." 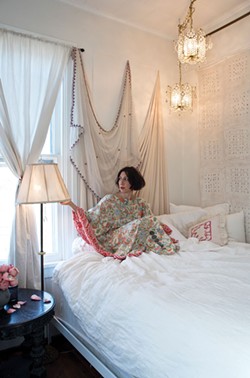 It is no surprise that Khorramian, like many painters before her, would find herself at home in the varied Hudson Valley landscape. A native of Tehran, she came to the US as a child when her family settled in Orlando. Regular family trips back to Iran often involved caravans and camping when Khorramian and her father Reza—along with local friends and family—would trek through the country's Semnan region, often hiking up into the rocky Alborz Mountain range searching for local pockets of culture and the visually striking landscapes hidden within the crags. "My dad and his buddies were obsessed with visiting very particular places during very certain seasons," Khorramian explains, "and seeing the full moon in certain regions at just the right time." This appreciation for landscape and perfect timing not only influenced her creative sensibility, but sparked her love of the natural world.


Khorramian left Orlando after high school, first attending the Rhode Island School of Design and then finishing her BFA at the Art Institute of Chicago. She continued her studies at Columbia University, where she received an MFA in visual arts. The next years were fruitful ones for Khorramian: Her work was regularly exhibited both in New York City and abroad and she was invited to multiple residencies to develop her vision. A residency at the Krintzinger Project brought her to Vienna, where she remained for two years. However, the 2009 recession hit her (thriving) art career hard—she lost her long-time gallery representation in Manhattan and had to return to the city to take care of unexpected family obligations. It all eventually lead her to questioning the viability of her art career. "I had to step away from my approach to art for a while and gain perspective on what I was making and what I was feeling." 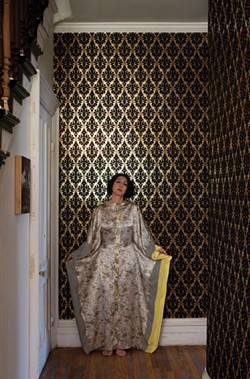 She went on hiatus from everything—her work, her life, even her art—and found herself regrouping on a friend's farm upstate. It was here, away from the expectations and demands of her previous life and in solitude, that another of her passions became her main focus. "Clothing design was something I'd been doing on and off my whole life," Khorramian explains. Starting at age five, when she'd begun sketching out patterns for her seamstress aunt, she would wear her own creations and eventually learned the basics of tailoring to sew those creations herself. Khorramian realized that this particular combination of material skill and creative vision might hold the key to her next step. "I just wanted to a sew in a straight line for a while," she explains. Thus Khorramian's nom de guerre and clothing design business Laloon was born. While visiting a friend in Hudson, she became enchanted with a storefront on Warren Street. She realized it was time to emerge from the cocoon she'd been encased within. "I knew that this is where I was meant to land," she recalls. Within two weeks, she opened her studio-cum-clothing store and moved to Hudson full-time. 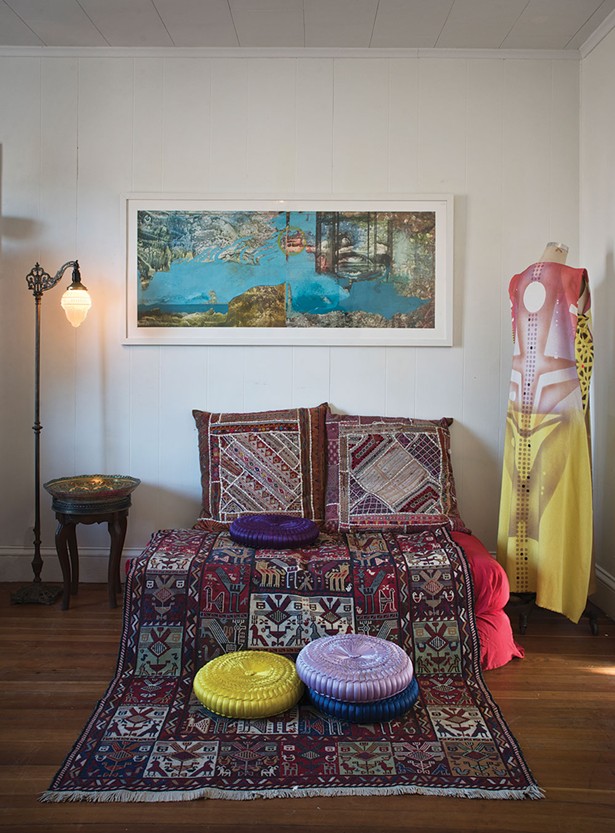