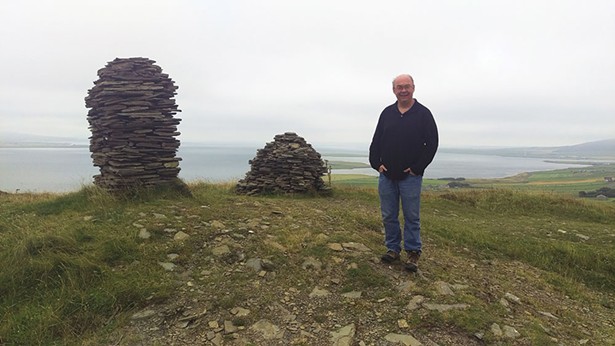 Curious about the origins of the universe? Head to Vassar College on April 21 for "A Day of Instruction on Ancient Cosmology" given by Laird Scranton and Ed Nightingale.

Scranton's ideas are based on the traditions of the Dogon tribe in Mali. "The Dogon say that their symbolic system describes how matter forms. So, my job as a comparative cosmologist is to take that clear statement and test it," Scranton explains. "I started educating myself about matter, and discovered yep, they got it right. Their descriptions and their drawings, you can set them side by side with diagrams from Stephen Hawking or from Brian Greene, and it's all the same stuff. The Dogon have the concept of matter right, from waves all the way up to the atom." According to Scranton, this tribe's lore simultaneously explains the beginning of the universe, the creation of matter, and the nature of sexual reproduction, all with the same progression of symbols.

Scranton was drawn into esoteric studies by happenstance. His wife Risa was reading the book Unexplained! by Jerome Clark, and drew his attention to a chapter on the Dogon, a culture that possesses sophisticated knowledge of astronomy without telescopes or textbooks. For example, they know that Sirius is a twin star, consisting of a bright astral body called Sirius A and a faint white dwarf, Sirius B—though the second star is invisible to the naked eye.

The Dogon closely protect their cultural heritage, like Jews. In fact, the tribe shares other traits with Judaism: skullcaps, fringed shawls, the practice of circumcision, and the celebration of a Jubilee year. Scranton's studies led to his first book, The Science of the Dogon: Decoding the African Mystery Tradition.

Scranton's studies have a political dimension. Western civilization, with its advanced technology and science, believes it has a monopoly on truth. How could an illiterate tribe in Africa know more about quantum physics than the brilliant Europeans? Scranton suggests that there are ways of attaining knowledge which do not involve the chemistry lab and the mainframe computer.

As Scranton continued his research, he found that other groups had made arcane discoveries similar to the Dogon's, including priests of ancient Egypt, the Sakti cult in India, the Na-Khi of Tibet, the Jewish Kabbalists, the Maori of New Zealand, and, on our continent, the Hopi, Navajo, and Cherokee tribes. "When you cross this boundary between the nonmaterial and the material, it's like shining a white light into a crystal; what comes out the other side is a rainbow," observes Scranton. "There's a unity-to-multiplicity dynamic."

Scranton has published seven books with Inner Traditions, a Vermont-based publisher. His most recent work is Seeking the Primordial: Exploring Root Concepts of Cosmological Creation. Scranton has articles in the Encyclopedia of African Religion and the Encyclopaedia Britannica. He has appeared three times on Coast to Coast, the late-night radio show with a cult following of mystics, truck drivers, and insomniacs. For an audience of 2.75 million, host George Noory investigates poltergeists, numerology, aliens, the Mattress Firm conspiracy, phantom clowns, and other nonrational phenomena.

Ed Nightingale is a master woodworker who has done restoration for New York's Trinity Church and the Vatican. Visiting the Egyptian pyramids in 1997, he had a builder's intuition that a complex symbology was involved. Returning home to Pennsylvania, Nightingale began analyzing aerial photographs of the nine pyramids at Giza. Drawing four circles over the landscape, he found sophisticated geometric relationships that relate to the structure of spiral constellations and of DNA. Nightingale's recent book, The Giza Template: Temple Graal, Earth Measure, elucidates these findings.

"A Day of Instruction on Ancient Cosmology" will take place at Vassar College Alumnae House on April 21 at 9am. For further information, contact scrantonlr@aol.com.