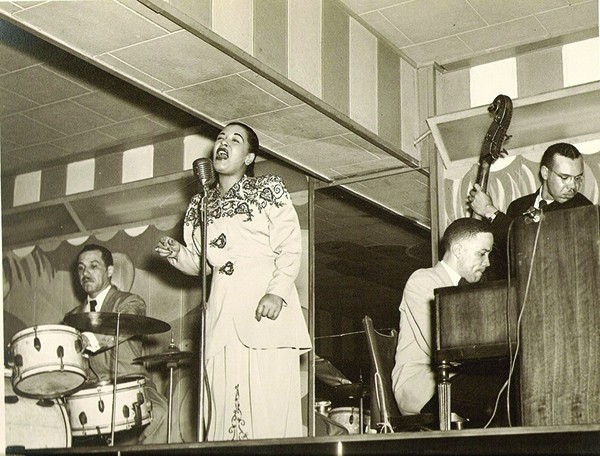 On April 20, 1939, Billie Holiday recorded a song for the small Commodore label that her main label, Columbia, had rejected due to its troubling lyrical content and dark atmosphere. Written by Jewish schoolteacher and poet Abel Meeropol, the song was called "Strange Fruit," and became Holiday's biggest-selling record. "Strange Fruit" uses vivid, appropriately disturbing imagery to highlight the rampant violence then taking place against black Americans in the Deep South. Sadly, the horrific recent events in several states have shown us that "Strange Fruit" is no less relevant today than it was when Holiday stepped into the studio to record it 76 years ago. A sobering thought that can't help but come up during the centenary of the woman many consider the greatest jazz singer of all time, whose music will be celebrated by the Aaron Diehl Trio with vocalist Cecile McLorin Salvant on May 8 at Bard College's Fisher Center.

"'Strange Fruit' is always a very intense song to perform," says Diehl, a critically applauded pianist whose third album as a leader, Space, Time, Continuum (Mack Avenue Records), will be released next month. "It serves as an important reminder of the brutal acts that have occurred, and still do occur. So that we can do something about them."

Born Elenora Fagan in Baltimore, Maryland, in 1915, Holiday had a harsh childhood. Her father left town not long after her birth and her mother was mostly absent. She suffered an attempted rape at age 11 and soon after got a job as a gofer at a Baltimore brothel, where she first heard the records of her greatest influences, Bessie Smith and Louis Armstrong. After joining her mother, who'd since become a prostitute, in Harlem, the 14-year-old Holiday briefly turned tricks herself before she began singing in New York nightclubs in the early 1930s. She cut her first records with small combos directed by band leader Benny Goodman and pianist Teddy Wilson, and next worked with the big bands of Fletcher Henderson, Jimmie Lunceford, Count Basie, and Artie Shaw. Holiday came into her own through a residency at Greenwich Village nightspot the Cafe Society and hits for the Decca label, but was plagued by dysfunctional marriages and a heroin habit; possession of the drug led to a 1947 prison sentence and the loss of the cabaret card she needed to work in Manhattan clubs. She returned with a TV appearance, a successful European tour, and the best-selling Lady in Satin (Verve Records) before succumbing to her addiction in 1959. Still, it seems Billie Holiday's music has never left us and is constantly being discovered by successive generations.

"Her voice has a direct impact without having to rely on vocal acrobatics," Diehl says. "It cuts straight to the emotional meat of whatever she's singing about."

Catskill Jazz Factory will present a Billy Holiday centenary tribute by the Aaron Diehl Trio with Cécile McLorin Salvant on May 8 at 8pm at the Fisher Center's Sosnoff Theater at Bard College in Annandale-on-Hudson. Tickets are $25-$45. (845) 758-7900; Fishercenter.bard.edu.