Everything But: Kitchen Sink Food & Drink 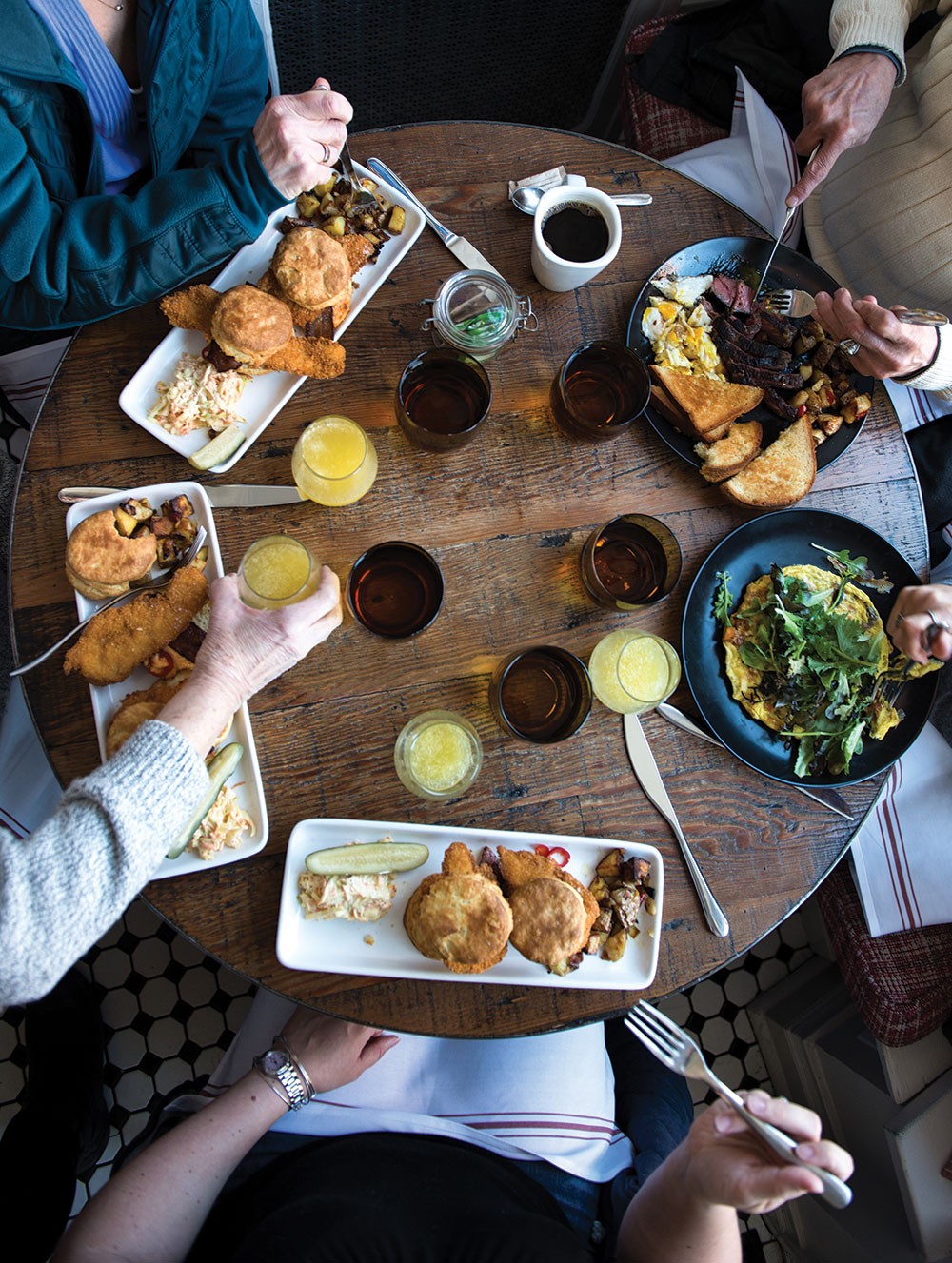 Lest you have any reservations that Kitchen Sink Food & Drink is a shi-shi dinner destination in the Hudson Valley, let the black-and-white photograph of the chimpanzee washing dishes ease your worries.

The chimp is one of a handful of kitschy mementos on the walls of this Main Street, Beacon restaurant that opened in August 2015. And they're all about kitchen sinks.

Because, you know, the food itself is everything but ...

"My mom came up with it," says chef/owner Brian Arnoff, proudly. "It was just an idea she had one day. We're gonna do everything."

So it's not subtle. Nor is it very large—a sardine tin with about seven tables and a bar (or takeout counter, depending on the night) filling the black-and-white tile-floored dining room. Walk to the bathroom (or the 25-seat backyard patio) and get a sneak peek at your food preparation. It's knowingly cozy and appropriately Beacon, featuring comfort food with a twist for worldly folks who crave the unexpected.

"At the end of the day it's a very casual environment," says Arnoff, the 29-year-old Poughkeepsie native who started his food-industry journey as a 15-year-old peeling potatoes and cutting onions in the prepared foods department at Adams Fairacre Farms.

Soon Arnoff was pursuing a hospitality management degree at Boston University, and, before graduating in 2009, began working for Barbara Lynch, the second woman to ever win the James Beard Foundation Award for Outstanding Restaurateur. Arnoff soon joined the team that opened her Boston restaurant Sportello, a casual, modern Italian twist on the American diner experience.

There are pieces of Lynch's Sportello—where homemade pastas are served in a counter-service style—in Arnoff's Kitchen Sink.

It's at Sportello—plus three months at the Apicius International School of Hospitality in Florence—where Arnoff found his passion for making pasta. And it shows at Kitchen Sink with his butternut squash lasagna ($21), an artful take on a Sunday dinner favorite. A layer of roasted and pureed squash blends lovingly with a mixture of fontina and homemade ricotta and, for a slightly crunchy and salty thrill, a puree of pecans and onions.

It's perfect comfort food coming from a place of care and peace. Making pasta is like second nature at this point for Arnoff, so now he finds himself focusing on the meditative aspects of the process. Alone in the kitchen at dawn, he'll cook, cut, blanch, and assemble his pastas carefully, his hands, mind, and soul working as one."In some sort of way, it's like my yoga," he says.

After two years working under Lynch and a stop at the Four Seasons in Boston, Arnoff began plotting the next major step. He saw that younger chefs were taking control of their careers earlier, and the classic process of learning under experienced chefs didn't sound as exciting. Plus Arnoff knew what it took to own a small business, as his parents Mike and Lisa Arnoff are president and legal counsel of Arnoff Moving & Storage, the Poughkeepsie company his grandparents helped grow.

So Arnoff decided to become an entrereneur. His idea was to open a macaroni-and-cheese food truck in Washington, DC. "It seemed like a great opportunity to be able to start something on my own, for what was a pretty reasonable amount of startup capital," says Arnoff about his truck, CapMac, the eighth food truck to open in the nation's capital. CapMac was successful and allowed Arnoff to further his passion of crafting pasta while providing a casual atmosphere with unexpected flavor profiles.

But if you're really searching for classic American comfort food, you'll want to visit Kitchen Sink on a Monday night, when Arnoff turns the restaurant into a chicken shack. Walk up to the counter (the bar on other nights) and order your fried chicken dinner ($15).

You'll get chicken marinated for a full day in a buttermilk brine, then fried in cast-iron pans. Served with cornbread, that terrific coleslaw, a pickle, cookie, and—to bring it all back home—macaroni and cheese, it's a great way to pep up a mundane Monday. "It's part of the original concept," says Arnoff, who loves cooking fried chicken for family members and friends. "And the other thing we wanted to do was make a feature on one night that made it affordable for people."

Arnoff gets his chicken locally, whether it's from Barb's Butchery in Beacon—where he's a regular—or from any number of local farms and food organizations on the Kitchen Sink source list. Plenty of meat comes from the Hudson Valley Cattle Company, and produce may originate from Mead Orchards in Tivoli or Obercreek Farm in Wappingers Falls, among other places. Then there's the family farm, Truckload Farm and Orchard, a half-acre in Hyde Park that produces thousands of pounds of tomatoes, summer squash, and hundreds of heads of lettuce.

Working with local food producers has always been key for Arnoff. When his wife finished her PhD, the couple decided it was time for a change and an upgrade from food truck life. Brian didn't want to battle the DC restaurant scene; plus, he loved his native home, and if he was opening a restaurant he wanted to know the food was grown nearby. "Both of us missed being there in a little more rural area that produces food. And being part of the ecosystem of small farmers and purveyors," says Arnoff, who moved home in late 2014. "It seemed like the right move."

They looked at New Paltz and around Dutchess County but settled quickly after finding the Main Street Beacon location. They took over the space in June 2015, did a few quick renovations, then opened Kitchen Sink Food & Drink in August.

Like a Kitchen Sink cook from Puerto Rico who one day was talking to him about how much she loved mofongo, the classic Puerto Rican dish of fried and mashed plantain, sometimes served in a stew with vegetables and meat. "I thought, 'Let's put mofongo on the menu and do something cool with it," says Arnoff. So there's Duck Mofongo ($22), a Puerto Rican staple (mashed plantain, a hearty sofrito-induced broth with clean cilantro tang) with a Hudson Valley twist (braised and shredded duck legs).

One item on the relatively small menu changes each week, so while there's typically something new, the goal for Kitchen Sink is to stay rooted in the Hudson Valley (there's Berkshire pork chop with sweet potato and bacon balsamic kale, $25) but frequently twist and dazzle the palate with influences that range from Arnoff's travels to the very conversations that happen in his kitchen.

Dessert (all dishes $8) furthers that mission. New Orleans-style beignets sit comfortably alongside a refreshing sour cherry and apple pie, with cherries from Samascott Orchards in Kinderhook.

Kitchen Sink's drink menu is a small but distinctly New York collection of wine (glasses $8 to $11, bottles $30-$45), soda ($2.50), beer ($6) and cider ($7). There are offerings from Newburgh Brewing Company and Keegan Ales, plus Millbrook Winery and Whitecliff Vineyards in Gardiner.

Arnoff loves working with local beer and wine producers, preferring to meet someone for a local tasting rather than receive cases of Oregon Pinot Noir off a truck. "There's something to be said for the Hudson Valley," says Arnoff. "It's a true microclimate; if you put food out that was produced locally, and if you pair it with wine that was produced locally, everything will come together, as it's the same soil."

Brunch also starts local but avoids usual breakfast fare so as not to compete with the popular Yankee Clipper Diner down the road. There's huevos rancheros ($16), a crispy chicken biscuit with pimento cheese and pickled fresno peppers ($14) and, for the bold, a homemade scrapple with eggs, home fries, and toast ($15).

Scrapple, for the uninitiated, is a pan-fried pork loaf dish popular in the Mid-Atlantic region. Most people have no idea what goes in it, but Arnoff certainly elevates it: Brookshire pork butt with local polenta, Allen Brothers' cooked pork, and plenty of seasonings.

Like the pasta, the mofongo, and just about everything at Kitchen Sink, the scrapple may seem foreign, but it fits: comfort food tweaked to fit an adventurous sensibility.