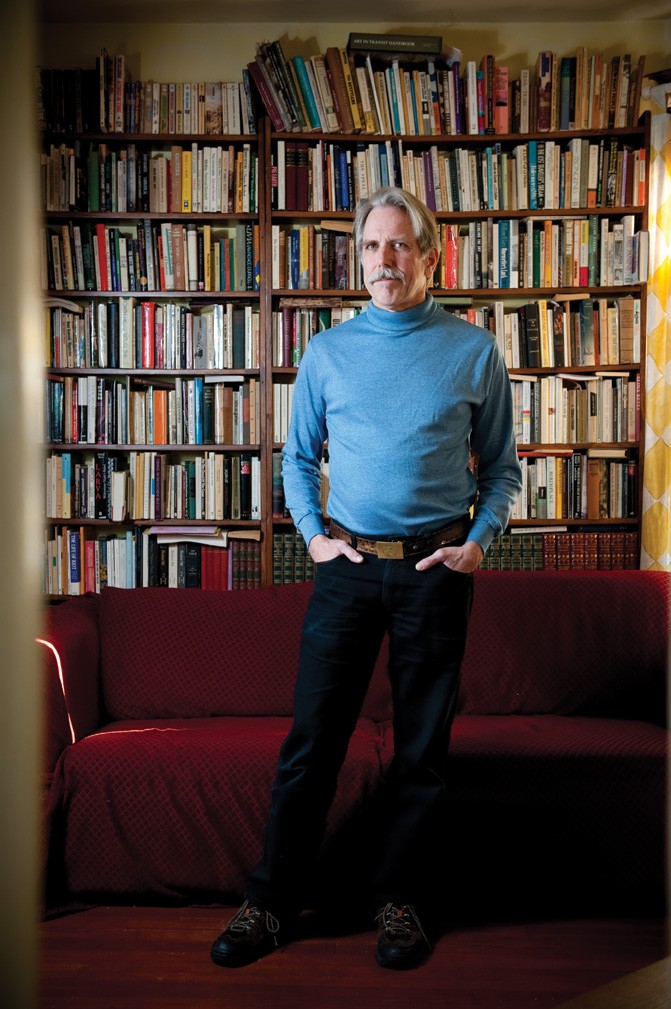 His award-winning press, McPherson & Company, operates out of a modest house in midtown, just a few blocks from Eng's Chop Suey Smorgasbord. The only clue to its identity is several cartons of books, just shipped from the printing press, stacked two deep on the front porch.

These are the tip of the iceberg. There are hundreds more cartons piled high on the back porch and stacked like cordwood under heavyweight tarps in the yard. Displaying the table surrounded by rolls of bookjackets where he packs orders for shipment, McPherson says, "This will dispel all illusions."

On the contrary, it reinforces the fierce dedication it takes to become a successful literary publishing house with a full-time staff of one. "I'm the whole show," the publisher/editor/distributor confirms cheerfully, though he collaborates with other editors on translation projects, and sometimes takes on summer interns. He offers a seat at the dining table, surrounded by houseplants, children's artwork, and Hanukkah candles; this is clearly a home in which life is lived fully. McPherson's wife, Erica Blumenfeld, is a museum registrar. Their son Aaron is 16, and 10-year-old Alyssa is dancing in UPAC's "The Nutcracker."

McPherson has lived and worked under this roof since 1987, but started his publishing career in Providence, Rhode Island in 1974. The first book he published was by Jaimy Gordon.

The two met in a poetry class at Brown University. McPherson was an undergraduate, planning to study "engineering with a side dish of English." Gordon, a graduate student, was already publishing poems in magazines. "As we became friends, she would share some of her writing in progress," McPherson recalls. This included the MFA thesis that became her first novel, Shamp of the City-Solo.

"I was blown away," McPherson says. "What's immediately striking about it is, it's not your typical autobiographical first novel. It's a satirical bildungsroman, a novel of education. It's Voltairean, but it is manic. To my mind, it encapsulates a lot of the energy and excess of the 1960s that was at large in the culture."

When Gordon couldn't sell Shamp, McPherson stepped in. He'd graduated from Brown, where he helmed its literary imprint, Hellcoal Press, and now worked in the admissions office. "I said, 'Let's publish it and make you famous,'" he laughs. "It was to be a one-off." He named the start-up Treacle Press, honoring Gordon's fondness for treacle oatcakes, and printed 1,000 copies.

"At that time, there was quite a community of small publishers, in Providence and nationwide," McPherson explains. "You could shoot an arrow and kill a poetry press." But few independent publishers released full-length fiction. "So we were embraced perhaps more easily. Embraced and repulsed—there was some negative press as well, but we did get reviewed."

Encouraged, McPherson continued publishing books as a sideline while holding other jobs. After a brief flirtation with graduate school, he met performance artist Carolee Schneeman and moved to Tillson with her. In 1979, he published More Than Meat Joy, a monograph on Schneeman's work that launched a new imprint for art books, Documentext. His "sideline" continued to grow, and in 1984 he dedicated himself to publishing fulltime. "McPherson & Company" became the umbrella for both literary and art publications. ("I asked myself, 'What would Alfred A. Knopf name his press?'" he quips.)

Though he'd published one of Gordon's poems shortly after Shamp, McPherson encouraged her to bring novels to other publishers. "I felt she would achieve a broader audience that way," he says. But they remained close, and in the late 1990s, he read an early draft of Lord of Misrule. Set on the bottom rungs of the horseracing world, red-dirt gritty and linguistically airborne, the novel had garnered a string of rejections, prompting the author to shelve it.

"I think it's safe to say that a book Jaimy thought would easily attract a commercial publisher, compared to some of her others, fell on blind eyes," he says. "She grew, I think, understandably dismayed. At the same time, she felt she wasn't entirely finished; there were parts she wanted to redraft." She was also busy teaching at Western Michigan University and a summer program in Prague, so the manuscript lay neglected for several more years.