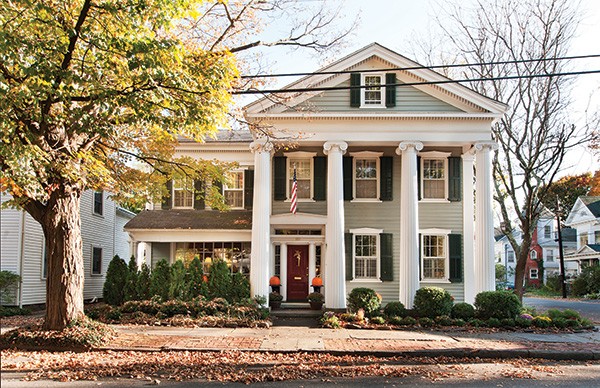 When interior designer Haynes Llewellyn and legal technology expert Gary Swenson began house hunting in Kingston in 2007, they drove from New York City to look at a listing they'd found on the Internet that they found needed too much work. Charmed, however, by the architectural quality of homes for sale in their price range, they soon looked at five and ultimately bought a stately 1848 Greek Revival on St. James Street in Uptown, chosen for its striking looks, fundamental condition, and walkable location, since Llewellyn does not drive.

"Ghastly wallpaper and wall-to-wall carpet everywhere, all in pink and blue, and it hadn't been updated in decades," says Llewellyn, a native of Alabama who together with Swenson, his partner of 14 years, previously owned a 7,000-square-foot 1890 townhouse in the Columbia Heights section of Washington, DC, and, later, a rather swell apartment on Central Park West. "During college, Gary was a professional house painter, and that's always been something he will cheerfully do for us, but I'm afraid I've rather exhausted him lately. I've just completed my fourth phase of renovations of this house, and it required his repainting four rooms with 17 different colors, including the accent tones on the moulding."

Llewellyn says he sources ideas from every available source and makes them manifest in his own digs on an ongoing basis. "I like everything to look fresh, just as I like glossy paint, and yes, I am something of a perfectionist," he admits.

They bought the house from the estate of a former speechwriter for President Richard Nixon. It had been unoccupied for three years. The initial renovation consisted mostly of removing existing decorative elements and took a large crew 12 weeks. When the couple moved to Kingston, they didn't really know anyone, so once Llewellyn had the house presentable, he walked around the neighborhood and left a party invitation at the home of every house he admired.

"They all came. That's how I met Taylor and Elizabeth Thompson, who own the Calvert Vaux Chronogram featured," says Llewellyn. "We're now very good friends. Elizabeth is the only person I have ever asked for decorating advice for this house, by the way." 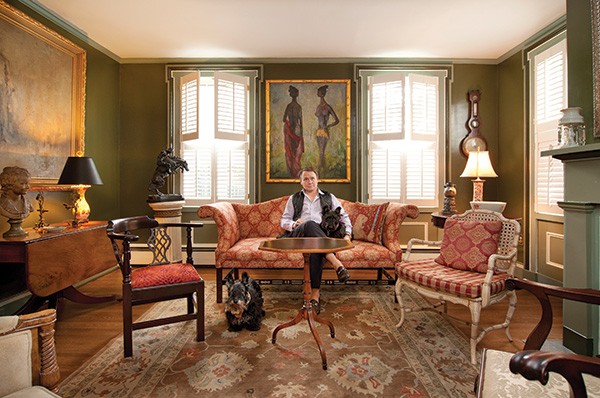 Llewellyn Loves Chairs The four-bedroom, three-bath, 3,000-square-foot two-story has an attic and a full basement, but only three closets. "The closet situation is terrible. They used wardrobes mostly back when the house was built. I keep my clothes in the attic," says Llewellyn, who favors dress shirts with French cuffs from chic haberdashers Thomas Pink and Ascot Chang. His favorite pair of cufflinks, yellow gold with deep blue lapis lazuli inlays—a treasured Christmas gift from Swenson—mirror the cobalt accents charging their home, in which intense shades of yellow, green, and curry red otherwise prevail. "And you can tell I'm from Alabama, because I have to have a lot of Transferware pottery, just like my mother," says Llewellyn.

"I also just love chairs. My favorite is a Chippendale, so pricey, but one can get tired of having too much brown furniture, so that's another good reason I mix it all up," he says, gesturing to an artfully asymmetric grouping of fine mismatched chairs. "We only have one guest bedroom, really enough, because we have so many guests as it is, people in the city just love to come stay. But two sitting rooms, and we really use them; we eat dinner all over the house, sometimes using tray tables."

A look at the inside of couple Haynes Llewellyn and Gary Swenson's Kingston mini-mansion.