When Jennifer Salvemini first stepped into the Kingston Design Connection Showhouse, the first thing she noticed was the floor-to-ceiling windows flooding the interior with natural light—and she decided to let the showhouse’s empty spaces do most of the talking. “I’m a minimalist at heart,” she tells Chronogram. “I love clean lines and negative space, [so] I wanted to utilize the breath of space the windows create.”

Tasked with designing the sitting room in the kitchen, Salvemini took the natural light to its logical conclusion: plants, and more plants. “A Victorian atrium or conservatory immediately came to mind,” she says. “All the plants and custom art that [are] inspired by nature give the space the impression of an atrium.” 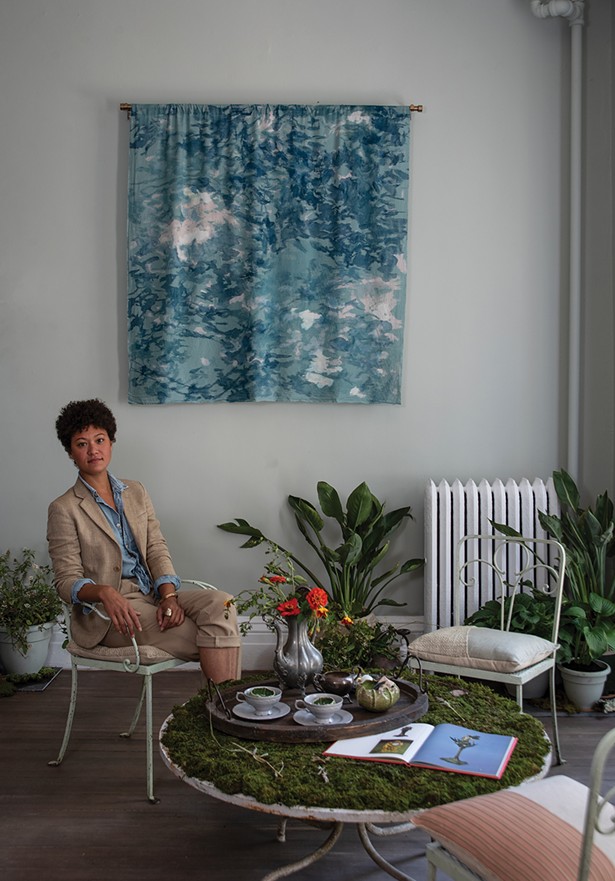 But a designer can go over the top with a natural theme, like any other—and true to her minimalist streak, Salvemini decided to often allude to nature, not outright revel in it. To that end, she hung a series of paintings by artist Katie Westmoreland, depicting dappled light cast from a canopy of trees. One of Westmoreland’s pieces, painted on ultralight cotton voile and hung on a rod, moves with the air current from a nearby ceiling fan.


Originally, Salvemini wanted to create a “living wall” (or, vertical garden) above the fireplace, but realized it’d be too much of a hassle for the showhouse’s owners once the show wrapped. Thinking on her feet, she worked with Chris Anna of the NYC landscape company Terraform to get plants up on the wall in a workable way.


“[Chris and I] stared at the wall above the fireplace, and at the same time, practically in unison, said "What if it's a frame?”, she remembers. “It was so great, because it was as if the wall told us what it wanted and we both heard it and saw it. The mantle piece is a plante, a lattice and a frame!”

“If a space doesn't have something unexpected, or playful, or even a bit off, it can feel overly staged and sterile. Rooms, like people, should have personalities with quirks and multiple dimensions.” tweet this

Beyond the use of plants, Salvemini works by two guiding principles: intention and repetition. She had a barely detectable lattice pattern painted on the walls and then repeated the lattice on the seats of chairs and in a custom-cut frame, powder-coated to match the walls and hung over the fireplace. A minty-green, lichen color is repeated everywhere — the walls, the furniture, even the foliage.


In the big picture, Salvemini avoids “taking interior design too seriously,” and never wants to create an overly curated, antiseptic look in a room. “If a space doesn't have something unexpected, or playful, or even a bit off, it can feel overly staged and sterile,” she says. “Rooms, like people, should have personalities with quirks and multiple dimensions.”


To Salvemini, the smell, feel and overall vibe of a room can supersede picking the correct throw pillows. “The highest function of art is to shift consciousness and compel you to higher thinking,” she says. “This is also the effect of being immersed in nature. Why not integrate these elements into your home and let them make you happy?”