When Gabriel de la Portilla first climbed into the attic bedroom of the Kingston Design Connection Showcase, he wasn’t struck by its beauty—but its awkwardness. He had no wide-open spaces, no standing room, just a severely sloped ceiling. To compensate for this, he decided to make “a room within a room,” with an unconventional inspiration: African safari tents.

“These modern luxury tents, you can put an air conditioner in them and outfit them with whatever furniture you want,” he tells Chronogram. “I decided to make the room look like a tent, where you could dream you’re in a safari somewhere exotic or in your own backyard.” By creating a tent-like enclosure and filling it with colorful antiques and quirky art, de la Portilla flipped a cumbersome space into what he calls a “fantasy room.” 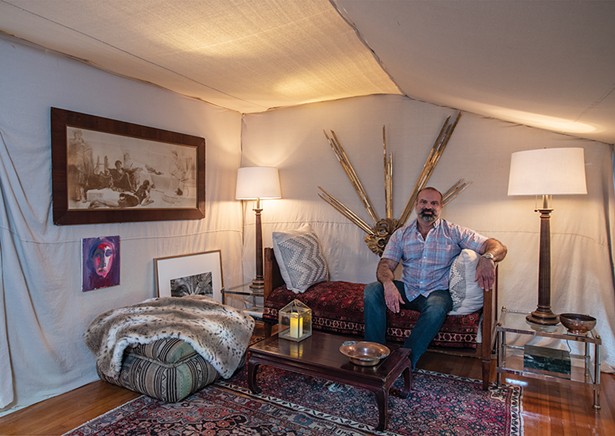 He began by covering the walls with drop cloth — more of a housepainter's tool than a decoration, but the canvas evoked an old-fashioned tent. He kept the color scheme close to the beige cloth, calling it “soothing … I didn’t want anything to jump out at you.” From there, he threw careful, surgical detail to the wind and filled the room with whimsical furniture and art.


Some interior designers swear by minimalism as a guiding principle; de la Portilla doesn’t quite buy it. “The less-is-more maxim is actually really difficult to get right,” he says. “Often, minimalism just looks boring.” On the neutral backdrop, he filled the room with diverse furnishings: fur throws and Oriental rugs, an 18th century Italian sunburst fixture, a neoclassical chair. “Stuff you wouldn’t find in a normal tent,” he says.


When it came to art, de la Portilla opted for mixed media art he created himself, as well as quirky touches like a stuffed canary in a bell jar. “Little things like the canary really stand out,” he says. “I could have made it very minimal, but I wanted to create more of a fantasy.”

“Luxury can exist anywhere, even in the smallest of spaces and where’d you least expect to find it." tweet this

The New York-based designer didn’t start his career thinking he’d be designing whimsical attic spaces; de la Portilla began as an undergrad hitting the books for an English doctorate. “I became dissatisfied with academia,” he says. “Post-structuralism gets old really fast.” When an interior designer friend came over and admired de la Portilla’s decor, the idea was floated to go into the business full-time. “I always had an innate interest in design,” he says. “[but] that career choice never occurred to me.”


Now, de la Portilla designs everything from downtown lofts to weekend houses on both sides of the Hudson River, and swears that a fantasy-level space can be attained without breaking the bank.


“Luxury can exist anywhere, even in the smallest of spaces and where’d you least expect to find it,” he says. “In this case, I’ve made a shell of a very prosaic tent but filled it with eclectic and eccentric furniture and art, creating a luxurious but welcoming room.”