Brooke Nelson’s design is defined by fearless leaps, seized chances and bold combinations, all without losing sight of creating an inviting, comfortable living space. She calls her style “whimsical steampunk,” combining antiques with offbeat art, colors, and decor, and in the kitchenette (or, small dining area) of the Kingston Design Connection Showhouse, she balances those funky elements with floating shelves and a mercury glass installation.


Really, her journey to the 2019 Showhouse itself was another leap well taken. “I heard about the Kingston Design Showhouse a year ago. I remember thinking how amazing it would be to be involved in something like that,” she tells Chronogram. “It seemed so far-fetched, [but] I took the leap this year and applied. I’m so grateful I did.” 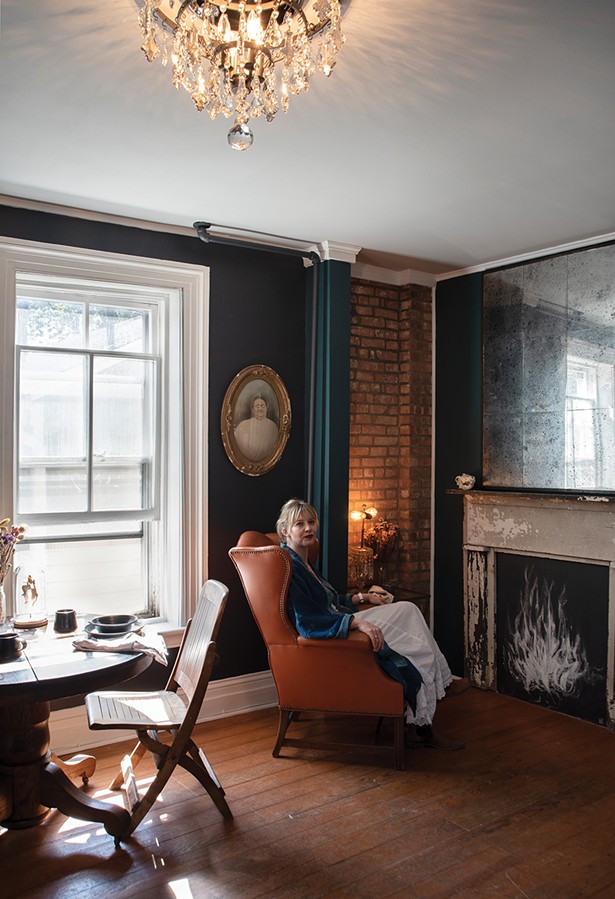 For Nelson, it was a long road to becoming a Hudson Valley interior designer. After studying theater and media arts at the University of Arizona, her career swung from TV to running a local non-profit, and she moved 11 times in 12 years to support her then-husband’s job. “Life happened and I chose love over my career,” she says. “I worked as a kitchen and bathroom designer for a little bit, but [I] felt something was missing. I thought about starting my own business, but it was never feasible.”


But growing up with an interior designer mother had influenced her deeply, and in 2019, she took a chance and started her own business: Transformative Spacing, a home staging and interior redesign company. “I love that I can work one-on-one with people,” she says.” [I can] understand their needs and goals for the space, make a few changes and help them see their dream become a reality.”


While designing the kitchenette, Nelson, like other designers, looked around the local landscape for inspiration. She was taken by one structure down by the water: the Historic Cornell building, owned by the Historic Kingston Waterfront Revival real estate company. “I try to constantly look around for color inspiration, [and] I love the rust colors on the metal against the brick,” she says. She stayed true to that metallic color scheme while using a variety of materials in the decor: crystal, metal, wood, velvet.


This was all to give the kitchenette a striking look, given it’s a high-traffic area used by four Airbnb guest rooms. “Design and staging for bed-and-breakfasts is a different approach,” she says. “With so many options out there for travelers in this area you have to create a space that gives the guests an experience—one that stands out.”


In the end, Nelson was able to put self-doubt to bed and let her bold aesthetic lead the way. “I started second guessing myself. I had multiple color samples up on the wall and hated all of them,” she says. Instead of giving up, stuck to her guns and went back to her original idea.


“You have to trust yourself, she says. “I was brought on because of my previous work. No one else’s. Not everyone is going to be in love with what you do and that’s okay. It took me a long time to learn that [and I’m] still learning. I guess it’s part of the journey.”