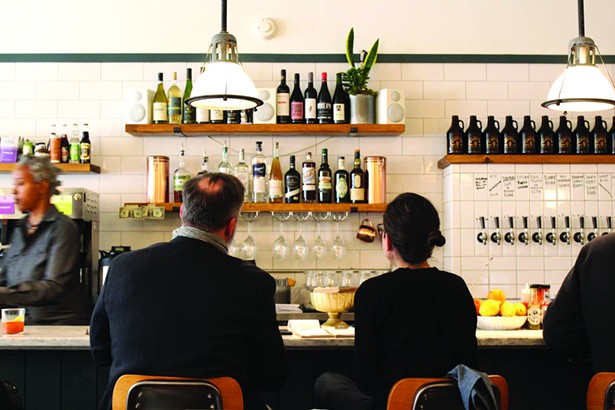 In early February, Aaron Quint went pro. The amateur baker with a well-deserved cult following quit his full-time job in the tech industry to focus on Kingston Bread + Bar, a restaurant in partnership with Rough Draft Bar & Books owners, Amanda and Anthony Stromoski. (Three years ago, Quint launched Kingston Bread Lab, a community-supported micro-bakery that eventually moved into the kitchen of Rough Draft, serving small-batch, naturally leavened breads made with freshly milled grains. Prior to that, in 2016, Quint co-authored (with Mike Bernstein) The Pizza Book, a Kickstarter-funded, cookbook-length love letter to pizza.) 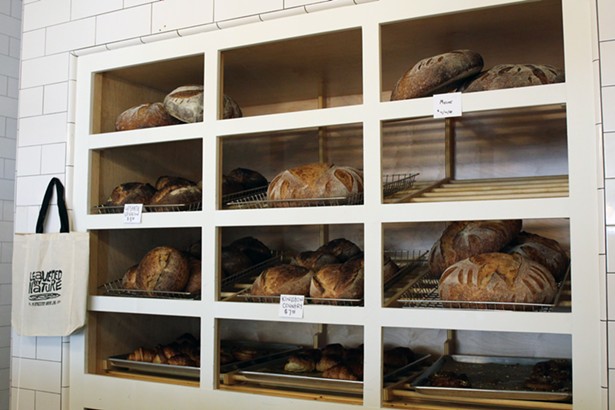 A note on the bread at KB+B: Quint has developed a cult following for a reason. From the Upstate levain (50/50 white/whole wheat loaf) to the sourdough baguette to the challah (Fridays only) to the bagels (weekends while they last), the bread is next level. Quint is the baker Kingston has been waiting for.

From 11:30am to 11pm, there’s a variety of sandwiches available (both meat and vegetarian $8-$11), along with a soup of the day, cheese and charcuterie, and a salad. Quint promises to roll out more dinner-type options as specials—like spaghetti and meatballs—in the coming weeks. Crimson Krier-Glading, a veteran of Park Slope craft beer mecca Mission Dolores, is the bar and service manager at Kingston Bread + Bar, and developed its beverage program. Her goal is to curate tipples that pair well with Quint’s food. The main focus is craft beer, with 12 rotating taps, in addition to two ciders, kombucha, and cold brew coffee on tap. Kingston Bread + Bar is also serving small pours of spirits from a rotating selection of 12 bottles (16-year-old Lagavulin and Coppersea Distillery’s Springtown whiskey currently among them), as well as wines by the glass and bottle.

And then there are the two batched cocktails on tap. One is Bamboo, the classic sherry drink; the other is the Toasted Rye Sazerac. For Krier-Glading, the Sazerac is the perfect drink. “It’s a little medicinal, with bright flavors, a twinge of citrus, and rye’s potency,” she says. “It’s not masking anything and it’s not fussy.” To take her Sazerac to the next level, Krier-Glading decided to infuse the Deadwood rye whiskey with some of Quint’s rye bread. Actual bread. How on the nose can a bakery + bar get? To make the cocktail, she toasts the bread, pulverizes it into a powder, and infuses the whiskey with it for 10 hours before straining it and adding the rest of the ingredients. Herbsaint is added as a rinse at service. The result is a bready twist on a classic. “It’s no surprise to anyone that rye bread in rye whiskey is a delight,” Krier-Glading says.

On Friday, February 28, KB+B will be hosting a grand opening celebration from 6-11pm, with off-menu dinner specials from Quint and a West Kill Brewing sourdough saison especially brewed for KB+B.

When asked why he opened a restaurant that served lunch all day, Quint is matter of fact. “I always wanted a place where I could get a sandwich at 6pm,” he says. And, apparently, a bread-infused Sazerac as well.