"Kill Me Now": Theater for the Apocalypse 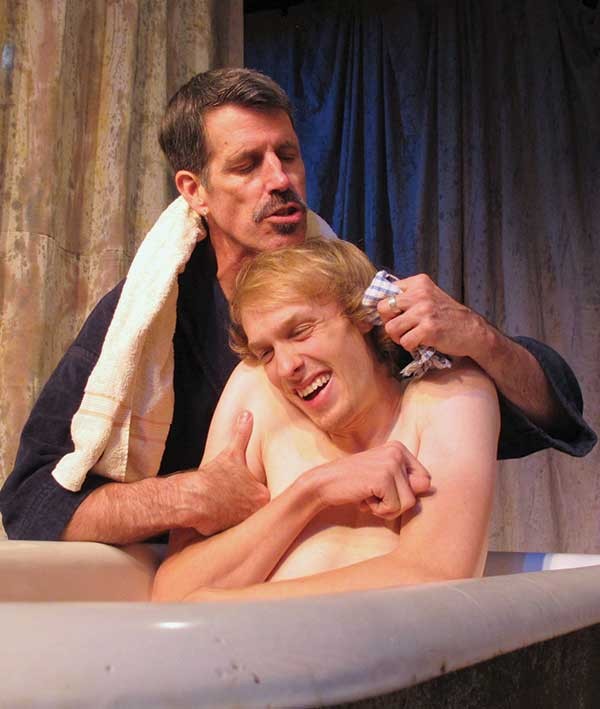 What's in a name? When it comes to the Catskill-based theater company Kaliyuga Arts, there are multitudes. The Hindi term describes our current era as one of imminent annihilation. So why attend a play on the cusp of the apocalypse?

For John Sowle and Steven Patterson, Kaliyuga co-founders, creating theater is the best response to the current chaos. "We believe that the theater in particular is one of the things helping us to hold back the dark—that it is, indeed, one of the few remaining places on Earth where people still gather to celebrate, affirm, and uphold everything that makes us human," Sowle has written.

The pair, artistic as well as life partners, brings to Stageworks/Hudson "Kill Me Now" by Brad Fraser, a play that encompasses the myriad conflicts of life: Fighting for love even when it sucks, holding on in the face of pain, and giving up when it's time. The American premiere, directed by Sowle, runs October 3 to 13 at the Cross Street Theater in Hudson.

"Kill Me Now" depicts a family in crisis. Jake, who lost his wife in a car accident, is the sole parent to severely disabled Joey. Offering some assistance are his sister Twyla and Joey's best friend Rowdy, the latter still coping with fetal alcohol syndrome. When Jake himself is suddenly incapacitated, the primary caregiver must ponder the fate of those dependent on him.

The play tackles the wrenching topic of end-of-life choices with irreverent humor, unbridled emotions, and salty talk. This is the signature style of Canadian playwright Fraser, who has been scaring the horses for decades with unflinching looks at the flaws that make us human, the insecurities that drive us, and sex—which further complicates things. Winner of The London Evening Standard Award for Most Promising Playwright, Fraser is best known to American audiences for writing and producing Showtime's "Queer as Folk." His 1989 play "Unidentified Human Remains and the True Nature of Love" became a critically acclaimed film by Denys Arcand.

Fraser based the character of Joey on his own nephew. Refreshingly, he refuses to depict disabled people as moral paragons, Sowle says. "In so much of TV, film, and theater dealing with the disabled, they are saintly and we learn so much about them. But these are very human characters. Joey is a kid of brat. Rowdy has his issues."

"It's really dealing with disabled characters as flawed and as human as the rest of us," Patterson says.

Kaliyuga Arts has staged Fraser plays before, starting with a 1997 San Francisco staging of "Poor Super Man," a tale of a married man giving in to homosexual desires and a pre-op transsexual in the last stages of AIDS. Even for the Bay Area, the production was unsettling. "His plays are generally hated when they first come out," Patterson says. "Several years later, people get the message."

In Fraser's works, Sowle says, "Emotion and comedy confront the darkness." For Kaliyuga Arts, the motivation is the same. "We have that impulse as a theater company; we like to push boundaries."

"We want to keep audiences—and ourselves—off balance," Patterson says. "You don't want to preach to the converted."

The American premiere of Brad Fraser's "Kill Me Now" will be staged by Kaliyuga Arts at Stageworks/Hudson's Cross Street Theater in Hudson October 3 to 13. (518) 822-9667; Kaliyuga.com.