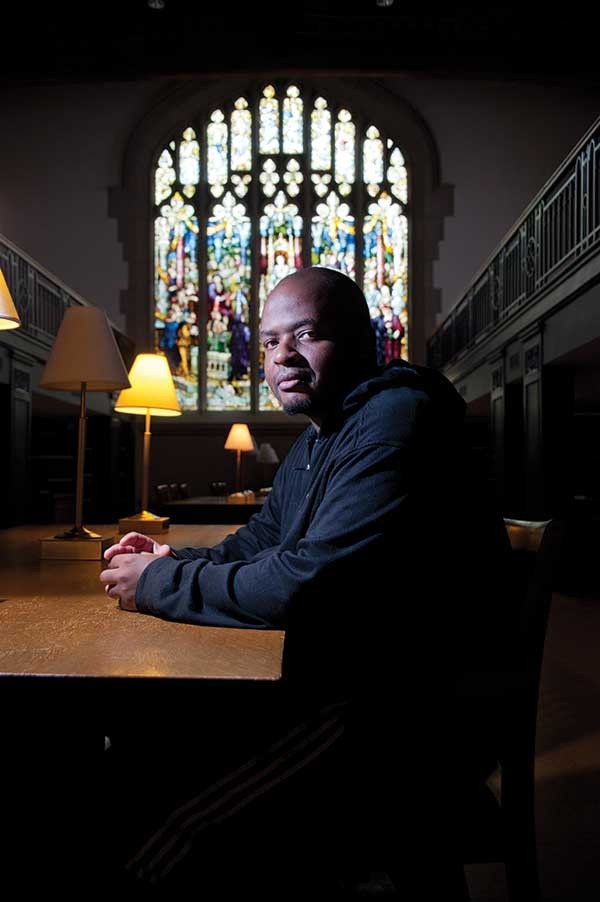 Kiese Laymon is in the zone. Agate Bolden Books just released his fireball essay collection How to Slowly Kill Yourself and Others in America, and—fueled by the title essay's cult status on Gawker and a recent appearance on NPR's Morning Edition—it's climbing the charts. So is Laymon's debut novel, Long Division, which came out in June to glowing reviews. It's the kind of one-two punch writers dream of at night, and it's been a long time coming.

Laymon enters Julie's Restaurant, across Raymond Avenue from the Vassar campus, where he's immediately greeted by two smiling colleagues. They talk for awhile before he ambles over, introducing himself with a warm smile. (His first name is pronounced Key-Essay, which seems like a Joycean pun.) He's wearing an olive-drab hoodie over a T-shirt, mesh shorts, and untied sneakers with bright orange laces. With his shaved head and scruffy goatee, a camouflage backpack slung over one shoulder, he could easily pass for a student.

Laymon sits at a table which seems too small for his frame and orders a small stack of pancakes ("You mean a short stack?" asks the waitress, and he nods. "Yeah, that.") Then he kicks back and starts asking questions. He's not being pushy, just curious: This interview thing is a two-way street. So is teaching.

The first time Laymon saw Vassar College, he was fresh out of grad school and still in his 20s; he'd just driven 14 hours from Indiana for a job interview. "MapQuest sent me over the bridge on 84 and up Route 9, so I missed the city completely. I'm from Jackson, Mississippi, which is 85 percent black, so when I saw these towers and shit—the word I kept thinking was 'frou-frou.' Then I got to the gates." Laymon pauses. "Because of where I'm from, my experience with security and police, I turned around and went straight to Alumnae House. I'd never been in a hotel without a TV before, and it was March Madness, man! So my first impression of Poughkeepsie was strip malls and no game." He laughs. "The next morning I went for a run and saw there was more to it. It wasn't all just Route 9 and the castle."

Laymon landed the job. For the past decade, he's been teaching English and Africana Studies courses with titles like "Narratives of the Underground," "Writing the Diaspora," and "Shawn Carter: Autobiography of an Autobiographer." He's also been turning out essays and struggling to publish Long Division, which started as his MFA thesis at Indiana University. Like the novel itself, it's a twisty tale.

Narrator Citoyen "City" Coldson, an iconoclastic black teen, is cherry-picked to represent Mississippi on a televised sentence contest (think National Spelling Bee with a splash of the dozens). When the judges give him the word "niggardly," he launches into a Kanye-style rant that becomes a YouTube sensation. City's mother packs him off to his righteous grandmother in small-town Melahatchie, and he brings along a mysterious, authorless book called (wait for it) Long Division. The hero of this book-within-a-book is another City Coldson, living in 1985 and crushing on a girl named Shalaya Crump, who finds an underground portal into his future and back to 1964, uncovering—and possibly changing—the roots and branches of his own history.

In his autobiographical essay "You Are the Second Person," Laymon describes Long Division as "a post-Katrina, Afrofuturist, time-travel-ish, black Southern love story filled with adventure, metafiction, and mystery." It's also snortingly funny and packs an emotional wallop. Two things it isn't: familiar and safe.

That may be why it took three book deals to get it in print. The first was with "a prominent African-American imprint" Laymon prefers not to name. After acquiring the manuscript, his editor moved to a young adult imprint of industry giant Putnam Penguin, urging Laymon to follow.

Though he worried about retooling his complex book for a young-adult market, the editor assured him he wouldn't have to change much. "Not true," Laymon says bluntly. "They wanted me to rewrite to a fifth- or sixth-grade level, with 'less racial politics, and more about the adventure.' They mentioned Percy Jackson."

The headbutting took years. Pub dates came and went; Laymon's health and relationships nosedived. Vassar colleague Paul Russell, who's published with both large and small presses, said, "I can't tell you what to do, but if there's an independent press you respect, you'll have a much better chance of getting the book you want." Laymon did a final draft and turned in a book he felt proud of. When the editor told him it still wouldn't fly, he left.