Man Up: Expanding Our Definition of Masculinity 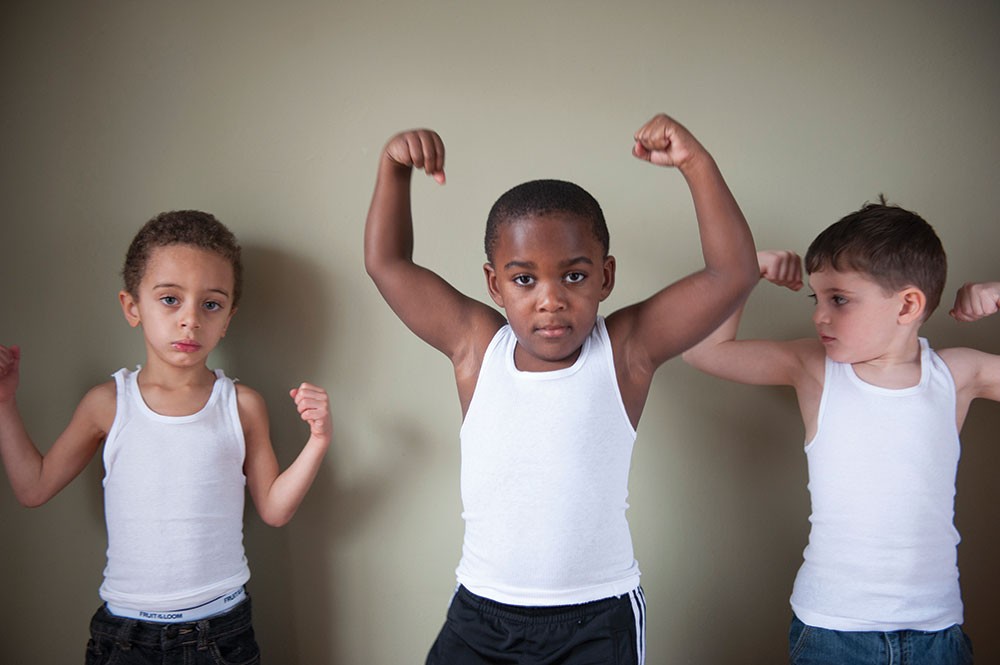 While Parmatma Khalsa was driving back from a funeral in Harford County, Maryland, a man in a neighboring car rolled down his window and started shouting. Khalsa didn't know what he was saying, but could see the misdirected anger and frustration in his face. Khalsa's parents became American Sikhs, and Khalsa was raised with kundalini yoga, meditation, and an emphasis on directing his attention inward. He wears a beard and turban, articles of his faith, which is presumably why the man was yelling, likely mistaking Khalsa for Muslim. "A big problem in our culture with males and their image of themselves," explains Khalsa, "is that they often don't have the tools to be self-reflective. They'll point their anger outside and see others as being the problem."

If manhood has a narrative, then power is its thread. Khalsa's grandfather was a fighter pilot in WWII. Dubbed the Greatest Generation by journalist Tom Brokaw, the men were well regarded because they didn't complain, and were principled and ready to sacrifice for God and country. Their sons were taught to confront problems head-on, that being a man was about responsibility, independence, and protection. When boys are told to man up, that is what's meant: Even young boys are expected to be in control.

The collective socialization of men is something that educator and social justice activist Tony Porter has thought about quite a bit. Through speaking engagements and writing, Porter defines the qualities that make the man: Vulnerability is unacceptable; pain, especially emotional, should go unacknowledged; men shouldn't seek help; anger is the only permissible emotion. He calls it the Man Box, and says that homophobia and heterosexism are the glue that holds it together. In his 2016 book, Breaking Out of the Man Box, Porter writes, "I quickly learned and understood that, as men, we have been collectively taught to define what it means to be a man by distancing ourselves from the experiences of women." That distance, and the corresponding sexual objectification of women and girls, Porter says, creates a society of oppression and domination, leading to sexism and violence. 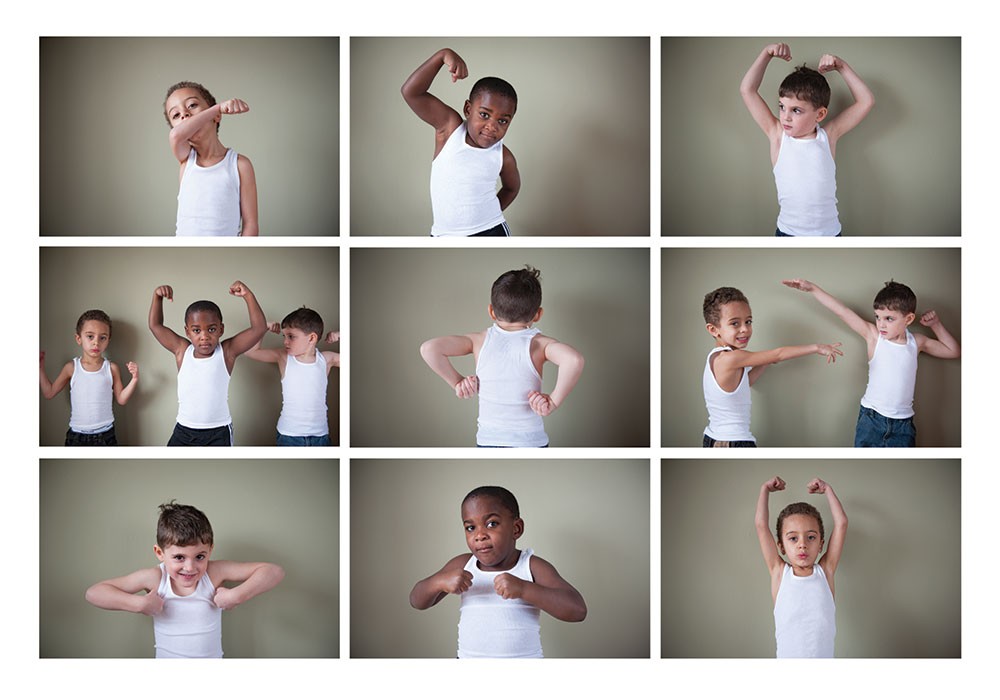 Porter is co-founder of A Call to Men, the violence prevention organization that promotes ideas of healthy, respectful manhood through education and training in high testosterone circles like professional sports, politics, and the US military—locally at the United States Military Academy at West Point. The work appeals to "well-meaning men," those who aim for positive manhood but still struggle with the ideals of the Man Box. As Porter describes in his book, they might tell their boys to stop crying, stand up straight, and be the man of the house. Meanwhile, they might tell their daughters that boys will be boys, and don't worry—daddy will take care of everything.

When it comes to raising boys, Porter writes, teaching boys to always be in control means teaching them how to renounce feeling. "The expectation is that by the time a boy is 10, they will have perfected it," Porter writes. "The fear of publicly displaying emotions, other than anger, this fear has us paralyzed and is holding us hostage." The antidote, Porter writes throughout his book, is to recognize the experiences of women. In cultivating empathy for others, men can access the better aspects of manhood.

A positive example of uniting genders is in the 91st Sojourners, a local chapter of the Baden-Powell Service Association (BPSA) scouts. It's traditional scouting and community service where boys and girls explore the same activities together. Group leaders, with representatives from each gender, are the badge-earning members of the oldest section of scouts. Scouts work together on all tasks and camping preparations, self-selecting their roles and missions during free time. During camping trips, the genders are segregated for sleeping and bathroom arrangements.

Lord Robert Baden-Powell was a lieutenant-general in the British Army, and wrote the book Scouting for Boys in 1908, based on skills learned during his service in South Africa. It fostered a Scout Movement that resulted in the Boy and Girl Scouts, with the latter forming a different curriculum based on societal norms for girls and women. Ten years ago, BPSA was begun as a return to the roots, and its youth scouting program was born five years ago. "Co-ed scouting is an experiment in our country," says Andy Bicking, Group Scoutmaster of 91st Sojourners. "We have a thesis: Let's not make any assumptions." The goal is to give everyone the same platform.

So far, Bicking finds the scouts rise to whatever situation they're in, irrespective of their genders. As scoutmaster, he sees that the awkward boy-girl relationships that happen in the teen years don't have to be the norm. The broader pop culture influences send messages of inequality that are subtle and indirect, but Bicking finds examples of equal opportunity are also more apparent and less abstract. "There's a lot to talk about in terms of the role that we play in society for the gender we project and identify with. The responsibility becomes to uphold the way we treat each other." Bicking feels that nature is the great equalizer. "It doesn't distinguish. It's inspirational and everyone can find something in it to relate to. There are lots of challenges: physical, tactile, skills based," he says. "We're all here on equal footing with the same interest in fulfilling the mission of the scouting program."

Think about the world in terms of a middle school fight. Generally, there are combatants, sometimes reluctantly thrown in the middle, and a circle of bystanders around them, often screaming for blood. "For 5,000 years, we've had a construct created from a patriarchal structure. And that patriarchal structure allowed for a number of things that basically confused masculinity and what the rights of masculinity were," explains Dan Lebowitz, executive director for the Center for the Study of Sport in Society (CSSS) at Northeastern University. Through partnerships with sports-based youth development organizations like the YMCA and Boys and Girls Clubs, schools, corporations, and global sports leagues, CSSS creates and supports curricula that encourage people to understand their responsibility and accountability.

One such series, the Mentors in Violence Prevention program (abbreviated MVP—a play on the sports acronym Most Valuable Player), turns the world dynamic into a creative one. It's credited as the first bystander approach to social justice. "We give people a tool kit for conflict resolution, as an empowered bystander–not encouraging the combatants to fight, but changing the dynamic so they can walk away with dignity."

Leading small group discussions, various courses tackle issues of race, gender, violence, and bullying. CSSS has worked with Major League Baseball, the South African World Cup, every major college athletic conference, and within branches of the military. In schools, it's a trickle-down model. They train health, gym, and classroom teachers who incorporate the curriculum into their classes in a sustainable way, and students who start clubs and organizations within their schools and go into younger classrooms to do peer training.

While violence and control are the pillars of the conversation around masculinity, Lebowitz says the ability to dominate should not make the man. Growing up disabled, Lebowitz says he lived a childhood of disenfranchisement. As the father of a multiracial family of six, he sees the institutionalized and sustained trauma that African Americans live under. In their Don't Hate the Player program, CSSS encourages participants to write a narrative where people take the lead or the back seat depending on their identifiers—reversing the roles of historic alienation. It acknowledges that the African American narrative in this country hasn't been written by African Americans, and raises awareness of privilege and empowerment. "People are defined a lot by the narrative created around their journey," Lebowitz says. "When they understand that they have the power to change things or write their own narrative, they move beyond the trauma-scape and learn how to change self-awareness into betterment."

The telling piece is that CSSS trainings are predominantly led by athletes. "At CSSS, we build everything off the platform of sport," Lebowitz explains. CSSS sees sport as a common denominator. People have different opinions around politics, religion, but they all support a favorite team that's often made up of different types. It's an access point for reaching everyone on issues of social justice. "People view sport, particularly male sport, as hypermasculine. So when those men stand up and say that the construct is warped, that the construct of masculinity needs to include kindness, compassion, humanity, respect for women, et cetera, if that's coming from the mouth of a former fighter or a former football player, then the males in the room suddenly aren't dismissing it. You've engaged them on a level where you've grasped how they've been acculturated in that hypermasculinity, and how to move them beyond that."

Twelve years ago, Khalsa had just separated from his wife. He was being encouraged by her male relatives to man up: Be more tough, more sexually powerful. "Tame her; she'll respect you for that." "Show her what you want." "How are you going to win her back if you're not a man in her eyes?" Instead, Khalsa made a solo 50-day hike from Vermont to Virginia on the Appalachian Trail, and confronted his sense of unworthiness. As his knees gave out and his mind took over during his evenings alone by the campfire with no screens to distract him, his self-reliance grew. "I didn't need to feel juiced by my wife in order to feel confident and good about myself," Khalsa remembers. "I'd found a source within that I could draw upon." When he returned, he and his wife reconciled.

"One of the modern problems for boys and men is that there are so many ways we can become disconnected—too mental, without being grounded in our bodies and connected to our hearts," Khalsa says. "Fundamentally, we have to experience what it is to be human, connected to ourselves and to others. If we can do that, and have an awareness, then our own masculinity will naturally blossom."

This summer, Khalsa, a teacher, will be leading a workshop for boys ages 5 to 12 at the Omega Institute in Rhinebeck. "The Sacred Power of Boys" is an adventure with the five elements: sitting by the fire, walking outside barefoot, playing games, experiencing silence, swimming in Omega's lake. Yoga, meditation, and discussion will be at the camp's core. Khalsa hopes to share tools to help the boys feel interdependent with everything around them, to have respect for themselves and others, and to explore an essential question, "How can we feel powerful without having power over others?"