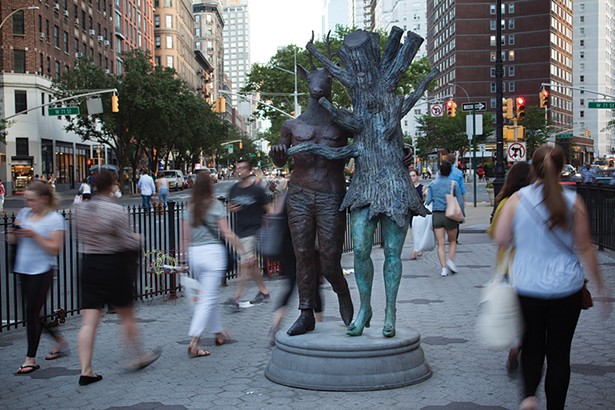 New York City is famous for being a no-nonsense, all-business kind of town, but starting last spring, six large-scale sculptural tableaux placed along Broadway from Lincoln Center to 157th Street brought a touch of storybook magic to the busy thoroughfare. "In Dreams Awake," the installation by Kathy Ruttenberg, who lives and works on an isolated mountaintop outside Woodstock, bewitched harried passersby with its cast of mythological, hybrid animal-human characters. Figments of an imaginary world, the sculpted figures also seemed at home in the urban setting: a deer-headed man, pants slung low over his hips, and a high-heeled tree-woman strolled down the sidewalk arm in arm like any other theater-going couple, while a giant mouse in striped pantaloons, tight jacket, red bow tie, and gold shoes was quite the dandy.

New Yorkers connected to the works and responded in unexpected ways. For example, people left offerings, such as broken eyeglasses and candles, at the base of Fish Bowl, installed at 157th Street. The sculpture depicts a kneeling goat-man offering a bouquet of flowers to a mermaid seated on a shell inside an enormous glass fish bowl, someone scribbled a heart in red crayon on the goat man. "People were taking pictures of it," says Ruttenberg, who says one of the exciting aspects of the project was how the placement of pieces that derived from personal narratives took on larger meanings and associations in public spaces: "Fish Bowl is about diversity," she says. "It's 'Romeo and Juliet' interpreted as a modernday West Side Story."

The installation was taken down in February, but now there's a book, "In Dreams Awake: Kathy Ruttenberg on Broadway," documenting the project. Published by Pointed Leaf Press, it includes photos by Fionn Reilly and others, along with essays by Anne Strauss, Deborah Goldberg, Naza Semoniff, Adrian Dannatt, and Alan Rosenberg, as well as commentary by the artist.

Ruttenberg mainly works in ceramics, but for durability's sake, she needed to scale up the new pieces—the tallest is 15 feet high—and re-engineer them in cast silicon bronze, cast polyurethane resin, glass mosaic, cast concrete, and acrylic. Each piece presented a distinctive technical challenge, whether it was how to cast a giant snail shell in acrylic that was transparent enough for the seated nude woman inside to be seen or how to ensure the pair of strolling figures would be aligned properly. "I was a little naïve saying I could do it in a year and a half," the artist recalls ruefully, noting that she and her team were working out the technical challenges "to the bitter end." 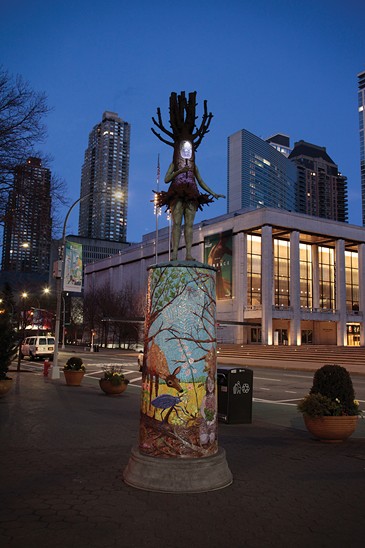 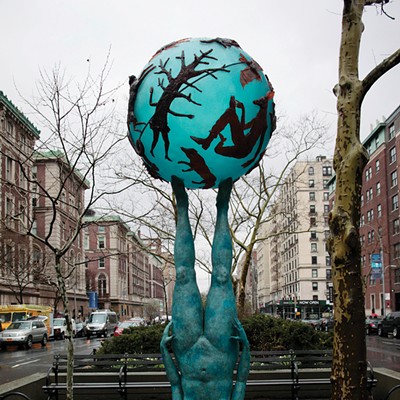 Two foundries, one of which was Workshop Art Fabrication, located in Kingston, did the bronze casting. The sculptures were then painted by the artist with a patina application. A tall cast-concrete column supporting a masked figure in All the World's a Stage was covered in colorful mosaic; based on Ruttenberg's painting, the stones were set by hand in a workshop in Munich. The giant fish bowl was fabricated by an aquarium company in California.

Ruttenberg also installed LED lighting on some of the pieces, such as the aquamarine translucent Renaissance-style globe resting on the feet of an upside-down bronze woman supported on her spreading hair. Titled Topsy Turvy, the piece was located near the gates to Columbia University and Barnard College and relates to the importance of education, according to the artist.

Ruttenberg says her collaboration with the various teams involved in the fabrication process was "pretty exciting" and has opened doors to new possibilities. "So many roads have opened, and I don't yet know which I should take," she says. "I read my horoscope in Chronogram last night and it said, 'You have a pot on every fire and you must feel so confused, but by June you'll realize it all makes sense.'"

REVIEW: "Hermerica" at the Kleinert/James Center for the Arts