Punk fashion icon Vivienne Westwood, who designed for the Sex Pistols and clothed the unruly London youth of the late ‘70s, once said, “I didn't consider myself a fashion designer at all at the time of punk. I was just using fashion as a way to express my resistance and to be rebellious.”


KASURI in Hudson embodies this dual essence at the heart of Punk—the rejection of the status quo and the acceptance of fashion as a powerful mode of self-expression—a way of being in the world. “People talk a lot about the connection between fashion and art—and a lot of bullshit is spun around that—but fashion is most interesting because of the way it relates to art, comes so close to it, and yet is also always something else. At the very least, it is an applied art; one that people are forced to engage with every time they put clothing on their body,” says Jonathan Osofsky, creative director at the luxury clothing boutique.

KASURI, which opened in 2014, is a road map of avant-garde fashion through the years. Heavily inspired by heavy-hitting Japanese designers like Rei Kawakubo, Issey Miyake, and Yohji Yamamoto, the careful selection of garments traces a path through the evolution of groundbreaking designers, from Westwood (whom Osofsky calls “the mother of the physical expression of punk”) all the way to contemporary designers like Rick Owens whose “gothic, kinky, conceptual take on revolt can collide with the playful Gesamtkunstwerk of Danish designer Henrik Vibskov.”


Throughout decades, across collections, these “visionary designers,” as Osofsky describes them, are often in dialogue, riffing off one another even while they create something truly distinctive. And Osofsky has the knowledge and the chops to trace these connections and share them when he is talking with visitors and customers.


“The designers we carry have been profoundly influential on fashion design but they transcend it. In fact, they really represent an kind of Anti-Fashion, uninterested in the trend cycles or commerce or luxury for luxury’s sake,” Osofsky says. “It is very important to them to explore what clothes are, what they have been, or can be, in ways that are always exciting and unexpected.”

The Road to KASURI

Osofsky discovered fashion (in particular the work of Westwood, Kawakubo, Yamamoto and Walter Van Bierendonck) as a shy, strange, queer teenager growing up on dairy farm in Columbia County, through hard-to-come-by magazines that he cherished like Interview, i-D, and The Face. “There was nothing like KASURI around when I was growing up. New York City and London were far away. I wore my parents’ clothes from when they were young, pieces from the army navy stores, and the Salvation Army, and put together looks inspired by bands that I loved and what I saw in the pages of the magazines.”

KASURI’s owner, Layla Kalin grew up between Arizona and New York, where her father and mother had their respective homes. Transitioning regularly between these two very different cultures and climates, she never felt completely at ease in either place. Even as a young girl, Kalin was acutely aware of the power of fashion—to make you feel part of something or separated from it. Rather than shying away from that apartness, she embraced it, and found in it bravery.


As a young girl, Kalin’s grandmother sewed clothing for her, introducing her to the magic of pattern-making. In her 20s, Kalin attended Los Angeles Trade and Technical College, and set up dressmaker’s equipment in her garage and experimented with building a small clothing label.


At some point along the way, she was introduced to the work of Yohji Yamamoto. “I can’t remember when I first discovered him, but I feel like he’s always been with me,” she says with a smile. In 2007, Kalin moved to the East Coast, began a family, and eventually wended her way up from Brooklyn to the Hudson Valley.


Observing the commitment to design that belied the culture in Hudson, Kalin came up with the idea to open KASURI, spurred by curiosity about whether a store that unlikely and experimental could survive upstate.

Around the same time, Osofsky was toying with a similar business idea, though unsure of how to actualize it. “I certainly didn’t have the resources—I was a frustrated artist,” he says. After many years nomadically wandering from New York to London to Providence and San Francisco, and a lot of places in between, he had found himself back in the Hudson Valley. He was just diving back into the art world, with some hesitation, when he was introduced to Kalin. “Quickly and unintentionally, but thankfully, it became clear that KASURI was a brilliant opportunity for me to apply my areas of expertise—art, anti-fashion, retail, and the history of boutiques that did something more than just sell things—to Layla’s vision.”


Together the unlikely pair have taken on the challenge of building something, a business that is both about the art and commerce of fashion.

The brands carried in KASURI rip open the contemporary, mainstream notion of fashion. Anti-establishment, avant-garde—these terms come close to describing the undercurrent, but with the baggage of overuse, they don’t suffice. “Our designers work within the fashion system, but they operate more as antagonists to it than champions or apologists for it,” Osofsky says. “They shred the lines between categories. They are intense and challenging. Maybe they are interested in interrogating ideas of beauty and ugliness, or exploring how historical dress can be integrated into modern day. Perhaps they like to take clothes apart and see what you get when when you put them back together.” The design impetus ranges from conceptual to formal, but Osofsky is adamant that not everything has to be overly-intellectual—it can also be playful. He says, “It’s usually both super serious and really light.”


The garments are so intensely idiosyncratic to the designer—works of creativity and vision, of guarded integrity—that they transcend much of the mainstream fashion worlds ideas of “relevance.” They are relevant for the designer who created them—and they become relevant for the customer that falls in love with them.


“The (thankfully collapsing) binary of city-versus-country has always been really tedious to me,” Osofsky says. “The idea that people from the country are somehow 'less cultured' or creatively literate than their urban counterparts is a false narrative. There are a lot of ‘local’ people who are really interested in this. The idea that you can only dress up in ‘appropriate’ environments is irksome. People often say, ’But I can’t wear this up here.’ I try not to validate that.”


While KASURI does carry many pieces that are essentially sculpture for the body, it is also important to Kalin and Osofsky that people actually wear the clothes the carry. “Some pieces are like billboards for the ideas of the designer—pieces that might distort the body, encasing it architecture and patterns, perhaps with no holes for the arms, because, who needs arms!” Osofsky says with a laugh. “However, equally important are the pieces that show their brilliance discreetly. Those same designers translate the ideas of their show pieces into subtler versions, which are nevertheless just as strong as the more intense pieces, but made for everyday.”

A self-described post-punk, anti-elitist, anarchist, Osofsky strives to create a welcoming, egalitarian environment in the store. “The most unlikely and eclectic people tumble in here. We engage with everyone like actual human beings,” he says. “This isn’t always the case—there is this perverse logic of ‘luxury spaces’ where sales people act studiously ambivalent or even hostile to their customers. People feel bullied to shop in these spaces, made to feel inadequate with the only solution being to spend a lot of money, which is deeply alienating. We want everyone—the neighborhood kids, the local farmers, the artists, the brilliantly dressed ladies coming from church across the street, the random millionaire—to get same treatment.” Osofsky encourages walk-ins to interact with the garments——to look at them, talk about them, ask questions, try them on. “Obviously we want and need to sell clothes,” he says. “But they are more than just clothes and we want to share them with people.” 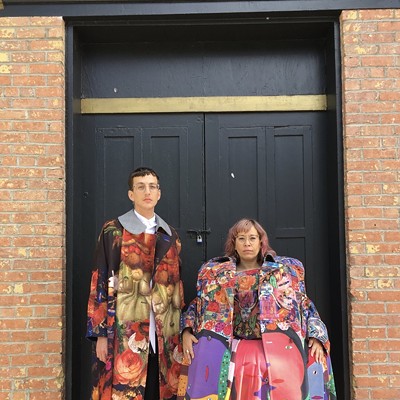 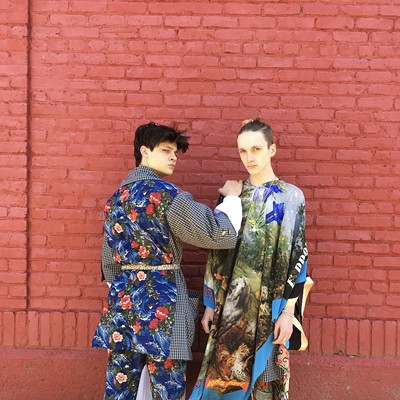 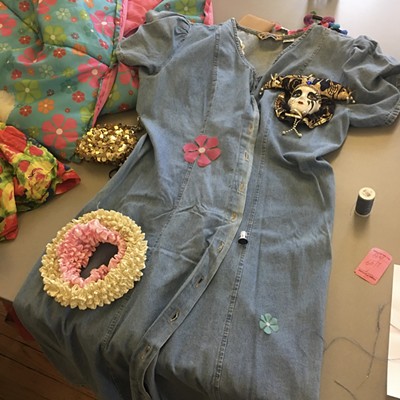 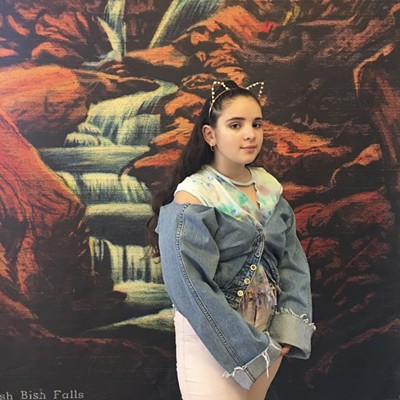 The 12 participants watched avant-garde runway shows and tried on clothing at KASURI, before making mood boards and beginning to design their own collections. Each of them designed a number of pieces either on their own or in a small group, utilizing many of the design strategies they saw in KASURI. “It was one of most rewarding and moving experiences for me and maybe all of us,” Osofsky says. “They took in a lot of what we showed them and applied it to their own interests. All we did was create an environment for their ideas to emerge and then helped them actualize those ideas.”


As the collections began to come together, the organizers brought piles of clothing from the local Salvation Army, items that related in some way to the ideas the young designers had sketched and discussed. Over the next two days the participants used these items as a foundation for their new constructions, taking them apart, putting them back together in fresh new ways.


“It was important to all of us that this not just be some nice, liberal, well-meaning experience,” Osofsky says. “Shanekia stressed the importance of encouraging the young people to see that creative expression could actually be a way of life and a career.” After the workshop, the decision was made to sell the participants’ clothes in KASURI, alongside the other innovative design. "Quite frankly it all holds up pretty well against the fancy stuff!” Osofsky chuckles.


Osofsky and Kalin both see KASURI’s future becoming more and more a platform for fomenting creativity, cultivating new designers alongside established ones, and working collaboratively with as many different kinds of people as possible. They hope that they can, in some small but meaningful way, help to address some of the area's income inequality. “Obviously fashion is a business and deeply embedded in the capitalist structure, but it can also be more than that. If we can champion people and ideas and create a platform for others that is mutually beneficial, that is super exciting,” Osofsky says. “Maybe that takes the form of collaborations, or internships and job training, or supporting the creation of spaces that teach skills related to fashion and design. This boutique is not just the hard cold fact of trying to sell things. It’s about creating an environment where people can come together and find ways of doing interesting things, with intention and purpose and integrity.”