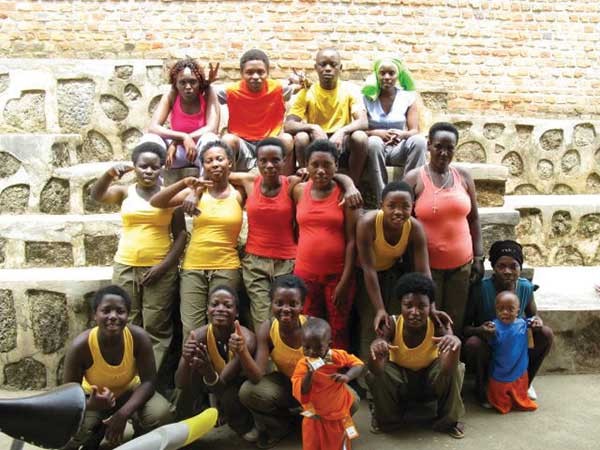 A lot of things can happen at a yoga teacher training program in Rwanda. Unexpected things. Life-changing things. Throw-you-for-a-loop things. "Weddings just pop up, and trainees bail for a whole day" says Megan Leigh, the Chichester-based yoga teacher at the helm of a recent Africa training. A student's prosthetic leg breaks, and money is hurriedly raised to replace it. Another day, someone is kicking up into her first-ever handstand, and a newbie teacher is finding his voice in a series of Sun Salutations led on the fly. At the Ubushobozi Project, a sewing and weaving NGO near Dian Fossey's mountain gorilla country, it's a lot to take in. Yet there are few places in the world that Leigh—the owner of Chichester Yoga, just outside Phoenicia—would rather be. The trainees, mostly teenage girls supporting their families, rise at 4 a.m. and return home after dark to do chores before and after the daylong yoga sessions. With only a little prior exposure to yoga from Western visitors, the project workers are hungry for the ancient Indian practice and its healing gifts. "Rwanda is one of those rare places where you can experience the effects of your work in real time," says Leigh. The collective's response to the opportunity to become teachers is so overwhelming that Leigh has so far raised money for two volunteer training visits, one completed in 2012 and another in February 2013, so she can give her time, her heart, and her yoga to people who need it most.

A Yoga Peace Corps
Extraordinary as it is, Leigh's Rwanda experience is not the only outreach story of its kind these days. A blossoming field of yoga service is taking root and spreading internationally—evidenced by a body of research around yoga's therapeutic effectiveness with underserved populations at home and abroad. Recent studies show the benefits of yoga and mindfulness practices for everyone from PTSD military veterans and at-risk youth to cancer survivors and prison inmates. Disparate efforts to bring yoga to populations like these are coming together to resemble something like a grassroots movement. Many of the field's experienced envoys as well as new enthusiasts will gather June 7 to 9, 2013, at the Omega Institute for Holistic Studies in Rhinebeck for the second-annual Yoga Service Conference. While talks and breakout sessions will allow participants to share best practices and find community, a luminary list of presenters will include yoga research expert and author Kelly McGonigal, PhD, and Trauma Center founder Bessel van der Kolk, MD. "We're taking a two-pronged approach," says Jennifer Cohen Harper, a founding member of the Yoga Service Council, the organization behind the conference. "One is to delve into very specific populations and their needs, and the other is to take a broad look at the field as a whole to see what we have in common and how we can support each other."

The connection between yoga and service is a natural one, built into the very fabric of yogic philosophy and tradition. "Seva" or karma yoga—the yoga of selfless service, or the art of giving without expecting anything in return—is a path of yoga that runs parallel to asana, the physical practice of yoga poses. Karma yoga can encompass any act of selflessness or volunteerism, from Mother Theresa-like work to simply putting another person's needs ahead of one's own. Physical yoga doesn't have to be part of the offering—but it's often a perfect fit. "The inspiration to serve usually comes from a very personal place in the life of a yoga practitioner or teacher," says Cohen Harper. "Once people experience the transformation in their own lives that a regular yoga practice inevitably brings, it's impossible not to see the connection between yoga, mindfulness, and an improved quality of life for other people." On the flip side, many experts who work daily with underserved populations—social workers, teachers, therapists, health-care workers—are finding in yoga a powerful modality to add to their repertoire. "They're struggling to find tools that work," says Cohen Harper, "and they're often really startled by yoga's effectiveness. Naturally, they want to learn more." 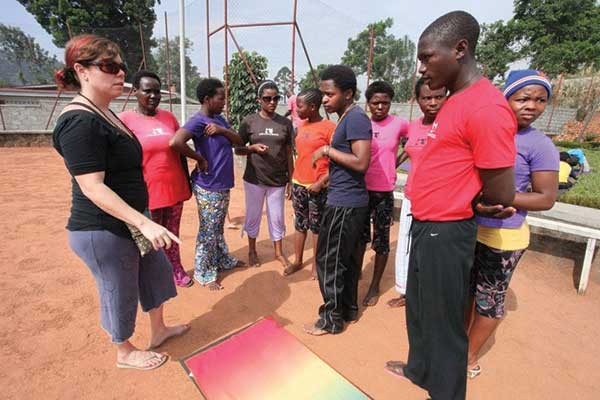 From Inspiration to Action
For Leigh, the Rwanda sojourns seem like an act of fate: Ever since a friend visited the area on vacation in 2010 and told her about the Ubushobozi Project and the young women who spend their days sewing bags and weaving baskets, she knew that one day yoga would take her there. A Westerner from the Dian Fossey Foundation had already taught some yoga to the project's workers, and they ate it up. "Then the money ran out and the yoga stopped," says Leigh. "So I decided to go. But I didn't want to just teach them. I wanted to train them so they could stop waiting for tourists to come and teach them yoga." After a short fundraising campaign, she set off for the first 10-day training in February 2012, not knowing what to expect. Not only did she find the trainees super-fit (they walk two hours each way to work every day), but their enthusiasm bubbled over. "There is so little support there that any support is noticeable," says Leigh. "It's a country with PTSD. Everybody is connected to the genocide of the 1990s in some way, so there aren't many people over 40." At 44, Leigh finds herself considered a "muchechu," an old lady. Yet despite the memorials at every street corner, she discovers in Rwanda an indomitable spirit. "In general it's a really welcoming, loving, friendly culture," says Leigh. "The project is a happy place, despite the odds. It's a success story."

Maggie Heinzel-Neel brings together yoga devotees to sponsor women in need in Rwanda through the Women for Women International program.