Visiting Judy Sigunick's studio, a sunlit space attached to a fantastically ramshackle, Edward Gorey-like house in Cragsmoor, which she shared with her husband and fellow artist, Phil, was an unforgettable experience. Every shelf, table, and most of the floor was crowded with ceramic heads and figures, many of them fine-featured girls with fragile-looking bodies, one draped majestically in a cape fashioned from used coffee filters, some seated on elephants, all scarred and cracked from the firing process. (Sigunick had developed her own complex technique, which allowed for the imperfections she delighted in.)

Sigunick's archetypes, inspired by Persephone and other figures from Greek and Egyptian mythology as well as Western literature, explored personal narratives while the totemic quality of her head and animal sculptures had a kinship with African art. More than mere representation or a recitation of styles, however, her clay figures seemed to embody the mysteries and ambiguities of the human condition, bearing the rhythms of birth and desecration in their scorched and fissured surfaces.

Such a transcendent imagination seemed to defy the limits of time and space. Indeed, Sigunick's art-making energies overflowed into the community, enriching the lives of many. Her empathy, joyful enthusiasm, disciplined work ethic, inquisitive mind, humor, and generosity of spirit were such an outpouring of life and youthful energy that news of her passing on April 19 was a shock to many in the wide circle of her friends and colleagues.

Despite fighting cancer, Sigunick was the eternal optimist: friends who had seen her not long before her death noted that she was filled with ideas and planning new work. "Judy's enthusiasm and sense of joy were a gift to those who knew and loved her," says artist and former gallerist Eleni Smolen, echoing the sentiments of many. "She had so much energy for her family, friends, and art, and, yes, even kimchi!" (Reportedly, she made the best.) 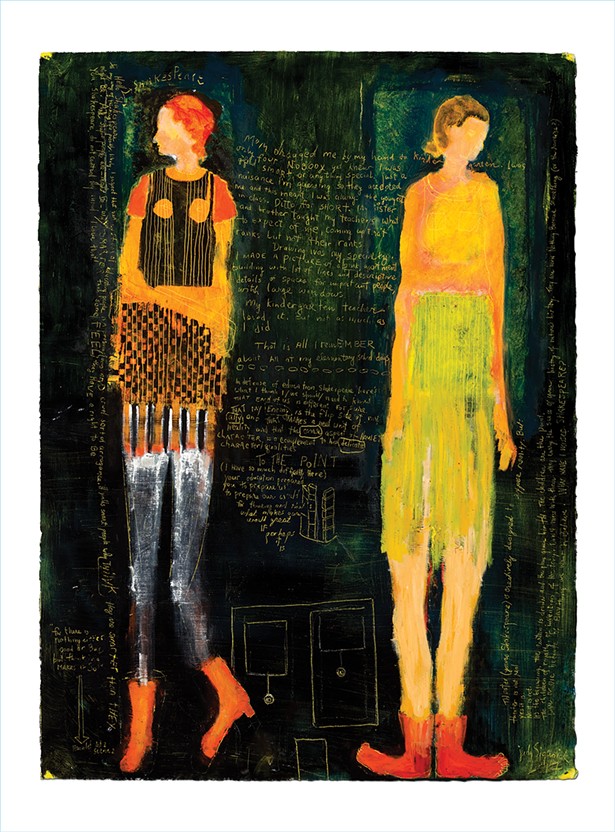 Raised in Chicago, Sigunick graduated from the University of Illinois. With her first husband, she lived in Europe and Israel before moving back to her home city and becoming a social worker. In 1969, her newborn child was tragically killed in a car accident (a trauma that later found its way into her art, along with her complicated relationship with her sister). In the 1970s, after having two more children and separating from her first husband, she met Phil Sigunick at his pottery class at Bleakley Studios in Cragsmoor. They later married and had another child. "The minute she walked in the room, I knew she was an artist," Phil says. "She was into art all her life. All I did was help her acknowledge that."

In her memoir, Sigunick wrote of her loaded relationship with creativity, "My older brother by two years taught me that boys are best at art and dissections of small living creatures, have the highest IQs, and that girls best keep to the nuts and bolts of being stupid. At least, this is how it seemed...I waited until I was 47 before separating myself from a mercurial brother's erroneous assumptions and began a life of personal longing, studied art with a group of barely competent teaching artists called professors, and learned about vicissitudes and nurturing a fertile and creative mind sans older bro."

By her late 50s, Sigunick had earned an MFA from SUNY New Paltz and had begun exhibiting her sculptures and works on paper in solo and group shows throughout the Hudson Valley and in Soho. She later taught at Dutchess Community College (DCC), Marist, and SUNY New Paltz. She was also a big proponent of public art, curating the "10x10x10" show of storefront art in Ellenville for three seasons and fulfilling numerous commissions herself, including a life-sized concrete rhino for the Rosendale Youth Center and a multi-section concrete whale for the Poughkeepsie waterfront. Both projects involved the community: kids and local residents fired many of the ceramic tiles affixed to the pieces.

Professor Emerita Pamela Blum, who hired Sigunick to teach ceramics at DCC, particularly admired her qualities as a mother. "She was so loving and supportive of any decision her kids made," says Blum—decisions that included, on the part of daughter Rachel, working in Afghanistan as a lawyer, and on the part of her daughter Ellen, documenting the stories of street kids in Kenya.

Not long before her passing, Sigunick completed a limited-edition book entitled Letters to Shakespeare. Consisting of 17 richly colored and patterned oil-stick paintings of Viola and other Shakespearian characters, each work on paper is accompanied by a love note to the Bard, beginning tenderly and familiarly, "Hello Shakespeare." According to her daughter Ellen, Sigunick had also embarked on a second project, entitled "Thirteen Ways of Looking at Viola," which further plumbed her fascination with the cross-dressing character from "Twelfth Night." (Viola was also a prolific subject of her sculptures.)

Temple of Sound at Basilica Hudson