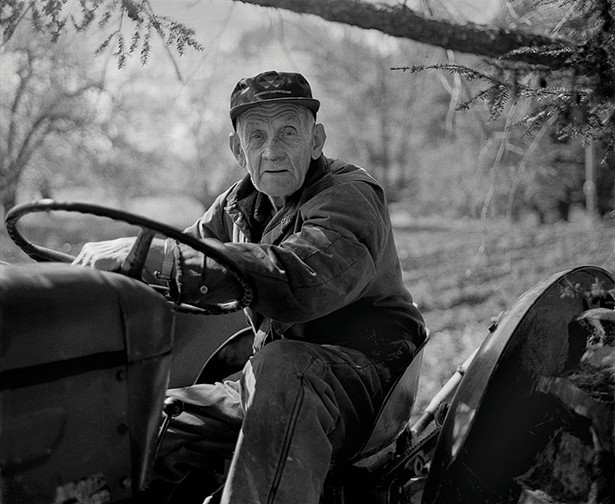 Photographer Joseph Squillante captures Hudson Valley agricultural life, and his photos will be exhibited in Red Hook this summer.

"People say, 'Joe, your photographs are very painterly.' At first, I thought it was a derogatory remark," recalls Joseph Squillante, a photographer best known for images of the Hudson River. Squillante's show "Hudson Heritage" opens at Greig Farm in Red Hook on June 11.

"I kind of backed into this subject," Squillante admits. He began this body of work in 1975 when his childhood friend Tom Scarano bought a house in Tivoli and asked for assistance fixing it up. Squillante came to help, and during breaks began photographing on the Hudson. Almost immediately, he found the results entrancing. Forty-three years later, Squillante's still celebrating the mighty watercourse with his camera.

This is the first exhibition of Squillante's agricultural photography.

"Hudson Heritage" is dedicated to Claude Potts, a 94-year-old-farmer who's worked a plot of land in Tivoli his whole life. (His family farm dates back to the 1820s.) Squillante has photographed Potts over 21 years and interviewed him extensively. The farmer and his family will attend the opening at Greig Farm.

Other images include a blossoming apple orchard, a vineyard in Marlboro and cows on a dairy farm in Old Saratoga, NY. Squillante also documented some of the last commercial shad fishermen on the Hudson. One picture shows Henry Gourdine, a nonagenarian shad-catcher from Ossining, making a net from a ball of cotton twine in his basement. Gourdine uses a wooden needle that his own father whittled. All the photographs in the show are in black and white.

Squillante's prints portray the inherent drama of the Hudson itself, which begins in Lake Tear of the Clouds in the remote Adirondacks, growing into a mile-wide tidal estuary beside the largest American city. Three photos in this exhibit quote from Squillante's broader Hudson River work: Highlands Nook, Lake Tear of the Clouds and Storm King Mountain. Black-and-white photographs best capture the stillness of the Hudson. Color agitates the eye. Squillante's river often has a pewter sheen.

Squillante's vision brings the inanimate to life. In his photo of Storm King, a horizontal rock shelf halfway down the image suggests a mouth, making the mountain resemble the head of a sleeping Cookie Monster.

Two of Squillante's earliest Hudson River photographs, taken a few minutes apart in 1976, also appear: Boy Fishing and Backa' Tom's. The first depicts a youngster beside a fishing pole, gazing off into the distance, entranced by the river. The picture might have been taken in the 1940s, or last month. Many viewers of Squillante's Hudson photographs notice their timelessness. Hudson River School artists have helped shape his style. Squillante cites Thomas Cole, Asher Durand and Jasper Cropsey as influences.

Squillante has been practicing Transcendental Meditation since 1973, which perhaps affects his work. "The quietness, I think, comes through," he suggests.

Squillante grew up in the Wakefield section of the Bronx. His father was an amateur photographer, with a small darkroom. As a child, Squillante would sometimes remove his father's Kodak camera from the china closet, look through the lens and press the shutter. "I was enthralled by the magic of this machine," he remembers.

Though he began shooting digitally in 2008, Squillante abjures Photoshop. Besides landscapes, he produces photographic abstractions and portraits. In fact, Squillante studied at the New School with legendary portraitist Philippe Halsman, who shot more than 50 covers for Life magazine.

But Squillante, who now lives in Peekskill, retains his enthusiasm for the Hudson: "When I teach workshops, I say, 'You go and take your camera down by the river, and you'll see for yourself!'"