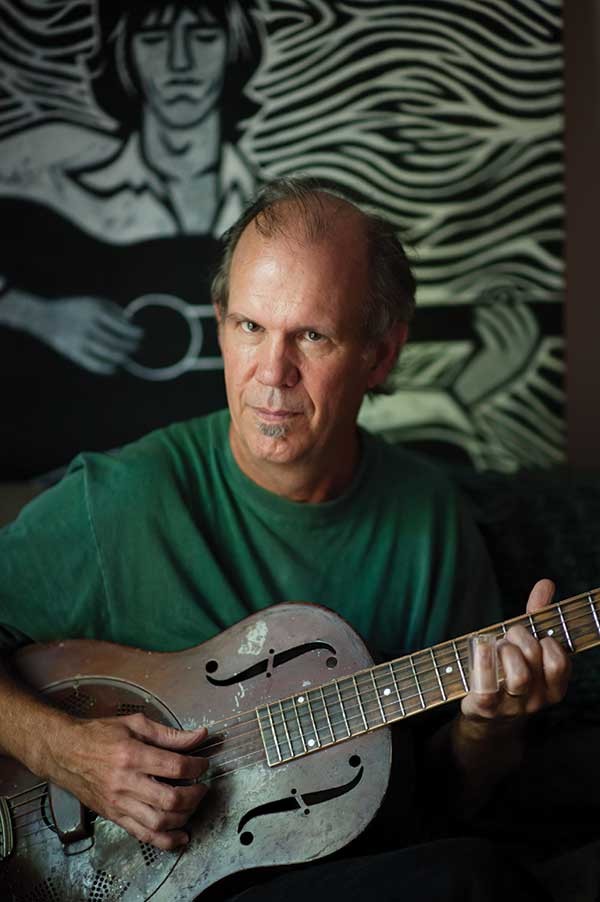 Woodstock's Golden Notebook has hosted many author events, but the launch for John Milward's Crossroads: How the Blues Shaped Rock'n'Roll (and Rock Saved the Blues) may be the first to provoke a call to the cops.

The launch party at the Colony Café was a multigenre affair. Milward read excerpts and sang pertinent songs, his gritty vocals accompanied by solo guitar on roots tunes and by his long-running band Comfy Chair on electric blues and rock numbers. The stage was flanked by his wife Margie Greve's illustrations for the book­—striking black-and-white portraits of such blues and rock icons as Robert Johnson, Howlin' Wolf, Eric Clapton, and Stevie Ray Vaughan.

As Comfy Chair wailed on "Black Magic Woman" (a Santana hit via Fleetwood Mac's Peter Green via Otis Rush), an intoxicated audience member "doing the Woodstock hippie dance" lost her balance, knocking over an easel with portraits of Muddy Waters and—wait for it—Peter Green. "She was okay, the paintings were okay," Milward says, laughing. "And you know that little room off the balcony at the Colony? During the rock set, there was a couple up there 'engaging in lewd behavior.' The club owner went up and said, 'You're going to have to leave.' And the guy says, 'Can't we have a few more minutes?'" That's when she brandished her phone to dial the Woodstock Police.

The cops never came—the club owner's threat did the trick—but Milward gleefully echoes a friend's response: "Wow, man, this is a great literary reading if they're doing it in the balcony!"

Milward and Greve share a classic white cottage in Bearsville with two mellow cats, Tipitina and Big Red. The walls display Greve's woodcuts and prints and hundreds of neatly shelved CDs and records. "Leftover swag from my rock critic days," explains Milward, an affable man with a soul patch; he's a little abashed by the framed gold Ted Nugent album in a back hallway, explaining that he profiled the singer for the Chicago Reader in the mid-'70s, "before he became such an absolute asshole."

Sitting near his cherished 1930 National Triolian resonator guitar, Milward notes that he's usually the one with the interview pad. Crossroads grew out of a feature he wrote for influential roots-music magazine No Depression on "The Sons of Gary Davis." The legendary blind preacher and guitar virtuoso gave lessons in his Bronx apartment to many younger players, including David Bromberg, Ry Cooder, Stefan Grossman, and Woody Mann. "I have no children," Davis once remarked, "but I've got many sons."

Milward met Mann at West Virginia blues camp. "Woody had these old tapes of his lessons with Davis," he recalls. "He was playing this little ragtimey thing—he was a very accomplished player for 15—and in the background you can hear Gary Davis clanging on his guitar. That's folklore at its base. It's like an oral history."

Milward also played guitar as a teen growing up in the Westchester suburbs; his first was a Daphne blue '65 Fender Mustang. "I wasn't in high school bands," he says. "I brought the guitar to college, where it sat in the closet. Basically, I ignored it for 20 years."

He started playing again in midlife, while working as a freelance rock journalist. "I'd been a music freak all the way through," he explains. After studying journalism and hosting a radio show at Northwestern, he veered between a "crazy job working for an encyclopedia" and freelancing for Chicago papers.

The Chicago Daily News soon put him on staff. "The first week, you're supposed to get acquainted, learn where everything is? My second day there, Elvis Presley died. It was a baptism by fire," Milward recalls. "I didn't leave the building for 24 hours. Every newsroom in the country was doing the exact same thing, all trying to avoid the lede 'The King Is Dead.'"

After the Daily News folded, Milward wrote for Rolling Stone, the New York Times, USA Today, and the Philadelphia Inquirer, moving to New York in the late '70s. Shortly after meeting Greve, he "threw things asunder" by renting a summer place from composer George Tsontakis. By summer's end, he'd relocated to Bearsville. "We've been a commuting couple ever since," he reports. He's based mostly upstate, while an art director job keeps her in Manhattan during the week.

Along with the musician portraits for Crossroads, Greve contributed an "author photo" illustration, which, Milward quips, "added some hair and subtracted some years." (He's repaying the favor by being her "editorial sherpa" on a music-based art project.)

Additional portraits of iconic musicians by Margie Greve from John Milward's book Crossroads: How the Blues Shaped Rock'n'Roll (and Rock Saved the Blues)