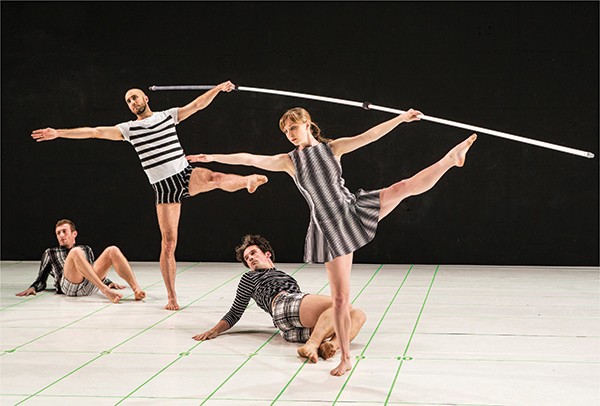 John Jasperse's work is otherworldly. Not as in the places aliens hail from; rather, he creates worlds you've never seen nor imagined for the stage, and this is certainly true of Within between, his quartet for a female and three male dancers.

Jasperse has described current times as "an era of solipsism, bordering on narcissism, a function of our inability to understand ourselves as a group as well as within politics," and suggests we go "beyond one's own voice to connect and portray something larger than (one) self."

Though Lenore Doxsee's vivid set, lighting, and visual design for Within between invokes Edwin Abbott's classic novella Flatland (the two-dimensional world populated by geometric characters), this world is multidimensional. The contrasts contained in Jasperse's costume designs; his incorporation of and going beyond the traditional dance idiom using wiggles, jiggles, slaps, and flaps; his use of parallel lines, slashing angles, and unusual body shapes, all beckon us to look deeper, as his contrasts reveal much to ponder about differences.

Per Jasperse: "The piece was born of an awareness of the polarization and extreme partisanship that's emerged through our current age of the individual. I wanted to explore the idea of difference as a context that was not an obstacle for a productive generative interaction. I looked at my own history and identified tendencies, ways of working that felt typically mine. At the same time, I was looking to identify styles, approaches, ways of being that felt foreign. The process took elements from both and cross-pollinated them. It seemed important to reach beyond the scope of a safe sense of self into territory that challenged who I was as an artist. Hopefully there is the possibility that this creates the same invitation for the public."

The score by Jonathan Bepler (known for combining traditional and nontraditional instruments and sounds) enhances the Within between world. "The score responds to, but at times is in juxtaposition to my choices," says Jasperse. "The idea of collision of disparate sources seemed an appropriate match for the piece."

A result of studying Alexander Technique and other somatic movement techniques (movements arising from inner organic impulses rather than from deliberate intentions), Jasperse's choreography can take on an ethereal flow that then causes his dancers to move with such ease they seem to float and stay above ground longer then gravity should allow when they take to the air.

Jasperse has received a Guggenheim Fellowship, two Bessies (dance's equivalent to the "Tony"), and several grants from the NEA and NY Foundation for the Arts. His company has performed at BAM, the Venice Biennale, Walker Art Center, Museum of Contemporary Art, Chicago, and Tanz im August in Berlin. He has created works for Baryshnikov's White Oak Dance Project, Israel's Batsheva Dance Company, and the Lyon Opera.

In response to the lack of dance space in Manhattan, Jasperse and choreographer Jonah Bokaer were invited to collaborate on the creation of the 4,000-square-foot Center for Performance Research in 2008, offering affordable rehearsal and performance spaces supporting the development of new, contemporary choreography in "The Greenbelt," a LEED-certified mixed-use building in Williamsburg. Per Jasperse: "An enormous amount of exciting work has been born there, a space for emerging and occasionally more experienced artists to show work in an intimate setting. I set out to make a contribution to the health of the [dance] community in New York City that I felt was endangered. I still feel that community is fragile, but there is a tenacity in it." John Jasperse Projects performs at Bard Fisher Center's LUMA Theater, on Saturday, April 30, at 7:30pm and Sunday, May 1, at 2pm. $25. (845) 758-7900; Fishercenter.bard.edu