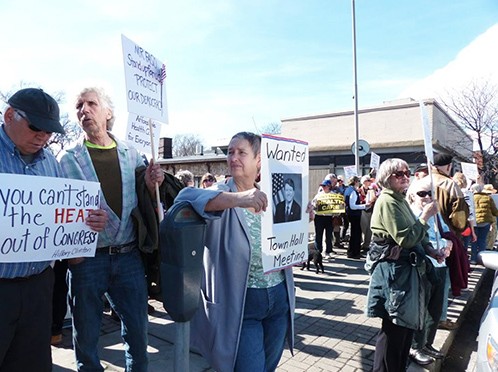 The race to represent New York’s 19th Congressional District in the US House of Representatives is as mysterious as it is hotly contested. There are no polls of the race, as house primary polls are awfully hard to come by. What we know is this: Incumbent Republican John Faso may be in deep trouble. Seven Democrats have stepped up to challenge him, and some have raised enormous sums. According to Open Secrets, Antonio Delgado, a lawyer from Rhinebeck, leads the pack in fundraising, with nearly $2 million raised so far according to first quarter FEC reports. He’s followed by Greene County businessman Brian Flynn, with a $1.4 million haul (much of it self-funded) and Kingston businessman and veteran Pat Ryan close on Flynn’s heels with over $1.3 million. Next are Cuomo staffer Gareth Rhodes of Kerhonkson and Kingston lawyer Dave Clegg, each with around $650,000. Jeff Beals, a diplomat and teacher from Woodstock has $230,000 and economist Erin Collier of Cooperstown rounds out the pack with just under $100,000. Law and Order SVU actress Diane Neal, an independent, has not reported any spending. Faso has around $1.65 million, though much of that was raised from businesses and GOP leadership PACs.

On this unseasonably cold spring day, I made the journey from the Chronogram office in uptown Kingston to Faso’s midtown office (which is also the office of Republican State Senator George A. Amedore) where members of Indivisible and other progressive groups such as Citizens Action gather weekly to protest. About a dozen protesters donned signs reading “For Sale, John Faso,” “Rep. Faso, Meet with us!!” and, the most tongue-in-cheek sign of all, “Trump *hearts* Putin,” with a hammer and sickle drawn in the heart. Many cars honked as they passed, with the crowd at one point being suddenly rocked by the roar of a tractor trailer driver’s support. There was a band, and a speech and Q&A with Pat Strong, a progressive local businesswoman running to unseat Senator Amedore.

The protesters, mostly white and disproportionately older, were nonetheless fierce in their condemnations of John Faso. “Faso is a fascist,” one told me. “He’s ridiculous” described another, saying “everything he’s done is bad.” He was described as a “rubber stamp for the GOP,” who “basically votes the way they want him to.” They also felt he was pro-business, anti-environment and, worst of all, “a good friend of Trump.”

One particular trend among these protesters that struck me was their extraordinary unification, or at least their lack of harsh division. If you frequently read political news, you’ll see stories about moderate Democrats being excoriated by progressive challengers and vice versa. Most notably, progressive Cynthia Nixon has been particularly fiery in her campaign to unseat incumbent Governor Andrew Cuomo in the Democratic primary. This disunified attitude wasn’t reflected among the protesters, however.

When asked about her preference among the seven Democratic candidates running to unseat Faso, Christine from Kingston told me, “I like all of them,” elaborating that she’s “grateful to all the candidates. I think they’re all heroes.”

While support for many candidates was represented in this group, few expressed dissatisfaction with any other Democrats. Strong favors Antonio Delgado stating “he’s an effective advocate for the people of New York’s 19th,” praising in particular his stances on “fair and equitable education [and] healthcare.” This view was echoed by Maggie from New Paltz who supports Delgado because “he can win” and because “he lit up the room” at a campaign event she attended.

Karen from Poughkeepsie said she liked both Delgado and Brian Flynn, confiding that “they are the strongest candidates,” but that, “I don’t oppose any of them.” Mary from Clintondale expressed support for Dave Clegg because of his “good track record as an attorney” and “good oral skills,” which she feels are important qualifications in facing off against Faso. Abbey from Woodstock was partial to Jeff Beals, asserting “we need a diplomat to deal with those idiots in the White House who behave like toddlers.”

I tallied up the support for the Democratic candidates among the protesters I interviewed, giving 1 point for those who expressed allegiance to a single candidate and .5 points to those who were partial to two or more.

According to our totally unscientific poll of the mostly over-65 progressive activists at today’s Faso Friday–most of whom are Kingston residents–Lawyer Dave Clegg of Kingston will be the Democratic nominee in the race to represent New York’s 19th!

Ours isn’t the only unscientific poll of New York’s 19th out there: a Facebook group called Listen to Us John Faso took a poll of its members preferences among the Democratic candidates. In this poll, the 203 respondents were asked to rank each candidate by preference from 1-7, 1 being their first choice and 7 being their last choice. In terms of first choice votes, it put Gareth Rhodes in first with an average ranking of 2.4, followed by David Clegg and Brian Flynn. Erin Collier trailed with an average ranking of 5.5.