John Faso has one problem, and it’s Antonio Delgado

The Democratic nominee in NY19 has gotten the better of several clashes with Republican John Faso. Can he take it all the way? 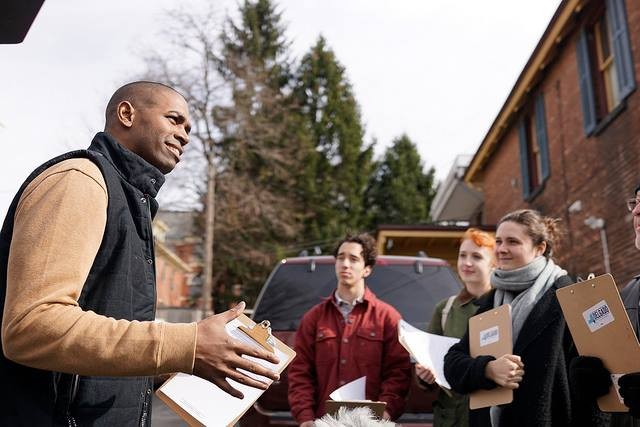 After more than a year of fierce and grueling political battles, election day is finally almost upon us. Nationally, the outlook is complicated. While Democrats are poised to capture the House of Representatives after eight years out of power, their path to the Senate is a much more winding and precarious one. In New York, however, Democratic prospects look far more favorable across the board. From the governor’s mansion to congressional seats to the state legislature, Democrats are well positioned to seize overwhelming political power in New York.


New York’s 22nd district, for example, is one of the Democrats’ best congressional pickup opportunities in the state. State Assemblyman Anthony Brindisi has amassed a reputation as a pragmatic centrist and has a strong chance at unseating conservative firebrand Claudia Tenney, a gaffe-prone and divisive figure in her district. Other battles in Long Island, Staten Island, and Niagara all have the potential to flip in the Democrats’ favor.


But nowhere are Democratic prospects for victory greater than in the 19th district, which covers the Hudson Valley, the Catskills, and the Albany suburbs. Since narrowly emerging victorious from a hotly contested seven-way primary, Democrat Antonio Delgado, an attorney and former rapper from Rhinebeck, with his charismatic oratory style, grassroots appeal, and fundraising prowess, has proven himself a formidable opponent for embattled incumbent John Faso of Kinderhook. Nonetheless, the race is as tight as can be. On the cusp of election day, let’s take one final look at where the race stands and determine who is favored going into the final stretch.

Though Faso has been on the defensive for most of the campaign, the average election observer would, more likely than not, describe his tactics as offensive. He has made consistent attempts to plaster Delgado as a “rubber stamp” for Nancy Pelosi, an urbanite with New York City values, and a candidate supported by a “mob mentality that exists in the Democratic Party.” He has also jumped on instances of New York City residents bussing up to the Hudson Valley to campaign for Delgado, including making unverified claims that the canvassers are “socialists,” something directly refuted by one of the volunteers.


Faso has also seized Delgado’s past career as a hip-hop artist, alleging in a New York Times op-ed that his lyrics are “derogatory to women and law enforcement.” That attack from July has since been echoed by a deluge of ads from Faso, the National Republican Campaign Committee, and the Congressional Leadership Fund, House Speaker Paul Ryan’s super PAC. But those ads—one of which used the words of one Chronogram article out of context—have been widely panned as racist. That perception is also fuelled in no small part by the image of Faso as something of a white, suburban, ‘country club’ figure. To be sure, Delgado has not been immune to gaffes. In a debate last week, for instance, Delgado said Israel is “not a Jewish democracy,” a comment seized on by Faso—who shot back by declaring “Israel is a strong democracy”—and conservative pro-Israel organizations. Even Delgado’s allies and some Democratic operatives admitted it was a mistake. Delgado walked back that comment in a later debate. That said, this scandal is small in the grand scheme of this election, and has likely been swept away by the overarching narratives at play.


Delgado has also been able to effectively hammer Faso on more substantive issues such as healthcare, which has been at the core of his messaging. He has put out ads like “promise,” which tells the story of a woman whose healthcare Faso promised to protect, shortly before voting to repeal the Affordable Care Act and replace it with the unpopular American Healthcare Act, which would've stripped away protections for people with pre-existing conditions. This tactic, unlike Faso’s focus on Delgado’s rap lyrics, is quite effective. That is owing to the fact that, according to the latest Monmouth poll, a large plurality of voters, 38%, cite healthcare as their number one concern. Faso has further damaged himself on healthcare by misrepresenting Delgado’s stance on the issue. He has consistently claimed that Delgado supports scrapping current healthcare law and replacing it with a single-player, medicare-for-all system—something that many of Delgado’s primary opponents proposed. But, as Delgado has said countless times, he supports working towards universal coverage through fixes to the Affordable Care Act, including establishing a medicare-buy-in system, but not a radical overhaul. On the plus side for Faso, he received a glowing, if generic, twitter endorsement from President Trump. In the tweet, Trump said Faso has “worked hard and smart,” and described him as “strong on crime, borders, and our 2nd amendment,” and “respected by all.” That has to count for something, right?

A Pride of Paper Tigers

Coming out of the primary, it seemed that the presence of several left-wing third party candidates would be a major foil to Delgado. Diane Neal, the “Law and Order: SVU” actress running as a progressive independent, had substantial fundraising potential thanks to her elevated platform as a celebrity. For instance, she boasts nearly 100,000 twitter followers to Delgado’s 14,000 and Faso’s 7,000. Green Party candidate Steve Greenfield, meanwhile, had local name recognition and seriousness, as an elected official, not matched by any of his third party contemporaries.


The Delgado campaign seemed to, at first, take the threat posed by these candidates quite seriously. His campaign was initially successful in suing to get Diane Neal thrown off the ballot due to discrepancies in her petitions, although that decision was later overturned on appeal. So it seems that Delgado saw Neal and company as potent elements. But those concerns now appear to have been mostly unfounded. The relative advantages of the third party candidates—and their rare achievement of actually getting to participate in one of the debates—do not seem to have helped the two candidates break the third party curse and make much of a dent. According to OpenSecrets Neal has raised just over $200,000 which, while an impressive sum for a third party candidate, pales in comparison to the millions raised by her major party opponents. Then there is Dal LaMagna, a millionaire inventor and center-left independent who has raised over $60,000 but won't be a factor in the race considering his absence from the ballot. Greenfield, meanwhile has reported no spending whatsoever. The combined spending of these candidates, though relatively formidable, hasn’t culminated in much more than a polling blip between them. The latest Monmouth poll showed just 3% of voters supporting third party candidates, with 1% going to Greenfield and 2% going to “others.” Don’t expect a much better performance on election day; polls actually tend to overweigh the projected vote share of third party candidates.

Forecast calls for a blue wave

Without a doubt, the fundamentals and data work in Delgado’s favor. First off, the Democrats lead the Republicans on the generic ballot by around 9 points. Considering NY19 is only around 5 points more Republican-leaning than the country as a whole, the base partisan fundamentals favor Delgado by a fair bit. Now, although NY19 is an Obama-Trump district—it went for Obama by 6 points in 2012 before voting for Trump by 7 points in 2016—that distinction doesn’t seem to be worth much for Republicans this year. Democrats are poised to win Senate seats, House seats, and Governorships from Obama-Trump states such as Michigan, Pennsylvania, Ohio, Iowa, and Florida, as well as solid Trump states like Montana, Kansas, and West Virginia. In the money race, meanwhile, Delgado has obliterated Faso. Whereas the two were neck and neck in fundraising after the primary, Delgado has since quadrupled his money with nearly $8 million raised as of the last quarterly filing deadline. That’s double Faso’s $3.5 million and a clear sign of the enthusiasm behind Delgado’s bid. In fact, Delgado nearly makes the list of the top 10 congressional fundraisers in the country. Another factor to consider is that $720,000, or about 20%, of Faso’s funds comes from PAC’s, compared to just $250,000 of Delgado’s, or about 3%. In as much as fundraising is a sign of grassroots support, this further solidifies Delgado’s advantage.


According to some race handicappers like Cook Political Report and Center for Politics, NY19 is a “toss-up,” meaning it’s too close to call and the margin of victory will likely be just a few points. Others, such as Inside Elections, FiveThirtyEight and CNN have it as lean or tilt Democratic. Recent polls have painted a picture that supports the latter rating. Whereas a Siena poll last week put Faso ahead by just 1 point—well within the margin of error—a Monmouth poll earlier this week showed Delgado leading by a more formidable 5-point margin. These results show a trend in Delgado’s favor; previous polls from Siena and Monmouth showed Delgado down by 5 and up by 4.5 respectively.


Polls have also found Delgado with consistently higher favorability ratings than Faso. The Monmouth poll, for instance, showed Delgado being viewed favorably by 42% of respondents, and unfavorably by just 33%, whereas Faso was at 38% for both. Siena, on the other hand, had Delgado much tighter, with 42% approval to 41% disapproval. But it also had Faso underwater at 40% approval and 46% disapproval. Both polls also showed a plurality of voters opposing Trump, but were split on the question of which party should control congress with Monmouth showing a 3-point majority for Democrats and Siena showing a 3-point majority for Republicans.


All in all, the current polling generally favors Delgado. Moreover, he has positive momentum, which is likely a result of the backlash to Faso's attacks on hip hop career. With just a few days until the election, these will likely be the last polls of the race and are therefore the best data points for predicting the result. So it's worth taking them at face value.

If you haven’t reached the obvious conclusion by now, you haven’t been paying attention. While this race may have been an uphill battle for Democrats initially, Delgado has proved a potent and effective political actor at every turn. He has taken what was once a dead heat and emerged as a modest favorite, thanks to a combination of skilled messaging, impeccable fundraising, and a little luck with third-party candidates and national trends. While NY19 may be tight on election day, this is now Antonio Delgado’s race to lose. Unless something radically changes, he will, more likely than not, emerge victorious on election night.