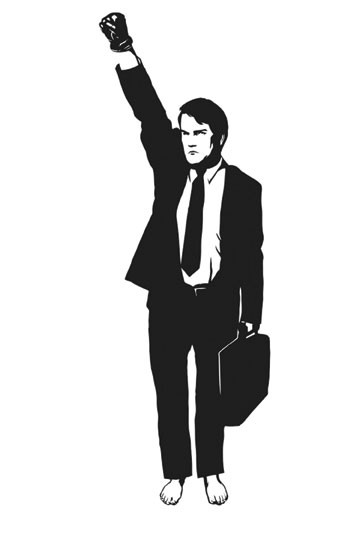 Richardson’s barefoot banker, named “Suitman,” was inspired by Tommie Smith and John Carlos’s Black Power salute at the 1968 Olympics. Richardson began painting suitmen in 2000, and soon after, creating street art—a form that he finds more accessible than fine art in galleries. “Being out on the street adds a rawness that anyone can experience.”

Occupy Wall Street has greatly impacted Richardson’s work. “The Occupy movement was a collision on a similar path to mine. Occupy is using art and images to bring about change, which is what I am doing as well. I also find the movement’s direct-action aspect inspiring.” Richardson partook in the Occupy Wall Street-affiliated “No Comment” exhibit at the JPMorgan building on Wall Street last October.

Richardson’s work also incorporates equations, combining dollar signs and numeric symbols with his suitmen. “I love mathematics and playing with numbers and patterns. The mathematics behind finance and the real-world application of finance is fascinating,” he says.

Through his “Suitman” series, Richardson hopes people will begin thinking and talking about how finance is affecting our lives. “Because of Occupy, everyone is now talking about the equation behind finance,” he says.

The halos around many of his suitmen represent the optimistic idea that businessmen can be fair. “With the Occupy movement there is a great division between the 99 percent and the 1 percent,” he says. “I believe that there are people who are making a lot of money and doing good. The barefoot banker can join the movement too.”

Influential British street artist Banksy has been an inspiration for Richardson’s work. “For a while, there was a distaste for incorporating political connotations in art. Street artists like Banksy made it cool again to be politically active through art. I absolutely consider myself part of that movement,” says Richardson.

The “Suitman” series has traveled the world—from Moscow to Jamaica to New York City, and now to Catskill. Richardson’s pieces can be seen wheat-pasted throughout downtown—some reaching 20 feet tall, as part of Catskill’s “Wall Street to Main Street” exhbition—a town-wide art installation created by Masters on Main Street and Occupy with Art. Occupy associated art, performances, workshops, and panel discussions will be exhibited through May 31. (See Page 107 for more details).

Richardson stresses the idea of evolution rather than revolution. “I don’t think anyone really wants to have a revolution,” he says. “The Grassroots Financial Revolutionary is an appeal for a financial and social evolution, and resolution.” Contrary to what many Occupiers promote, Richardson believes that there is hope in the 1 percent. “I believe in the potential of humanity,” he says.