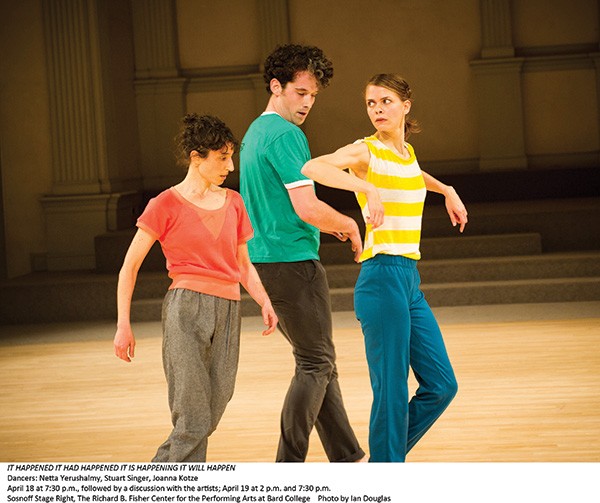 Recipient of the 2013 "Bessie" Award for Outstanding Emerging Choreographer, Joanna Kotze is a force in the world of dance, known for moves that demand and manipulate space. Kotze's original dance set, It happened it had happened it is happening it will happen has been described by the New York Times as "a run-on sentence for the body." The performance brings past, present, and future into one unpredictable moment. The addition of Stuart Singer and Netta Yerushalmy make for a trio of dancers who juxtapose order with chaos as they sprawl across the stage, engage in rapid and at times violent movements, and even involve the audience without ever breaking the fourth wall. Kotze, Yerushalmy, and Singer, a current guest faculty at Bard, perform at Bard's Fisher Center on April 18 at 7:30pm (discussion with artists to follow); April 19 at 2pm and 7:30pm. (845) 758-7900; Fischercenter.bard.edu.