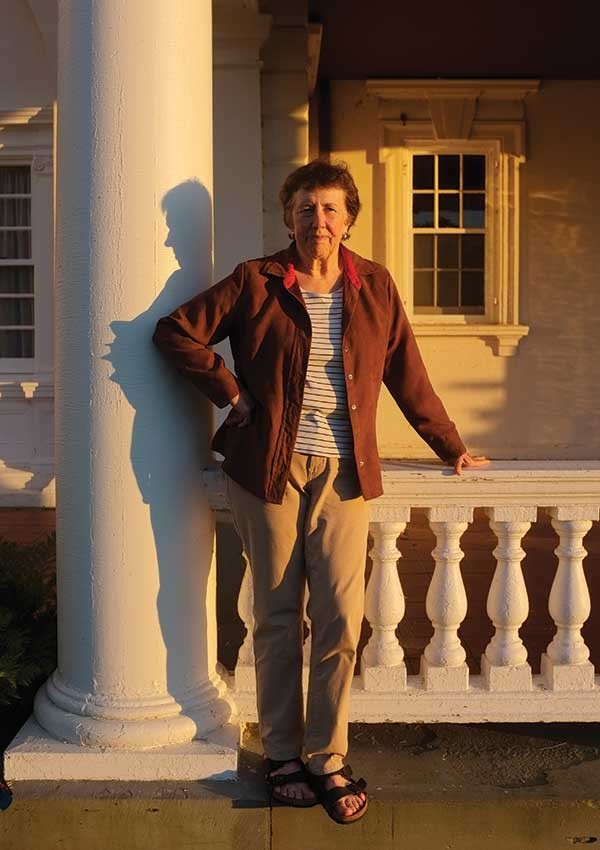 In late 2008, Joan Tower was about to celebrate her birthday with a pair of concerts and had been recently nominated for three Grammy Awards—all which she ended up winning. Five years later, the composer and Bard College educator is once again the focus of a musical program in her honor, an event commemorating the 75th year of her birth and taking place on the campus this month. "It's lovely to have your birthday celebrated, especially when you get older," she observes from the desk of her photo-and-memento-lined office. "I just try not to think about the fact that [the birthday concert] means that everybody knows how old I am. [Laughs.] Seriously, though, I do have a great life. I have a really good job at Bard, with great students. I'm doing what I want by making music with great musicians. I feel like I'm one of the most blessed people in the world."

Thanks to Tower's amazing music, the world is pretty blessed itself. One of America's foremost contemporary composers, the Red Hook resident is revered for her dramatic, colorful, rhythmically dynamic, and frequently percussive works, which are as accessible as they startling and challenging. Her signature efforts include the frenetic chamber piece Petroushkates (1980) and such expansive orchestral opuses as Sequoia (1981) and Silver Ladders (1986), the latter of which made her the first woman to win the prestigious Grawemeyer Prize for musical composition. But the Grawmeyer and the Grammys are by no means the only honors she's accumulated over her nearly five-decade career. Besides being inducted into the American Academy of Arts and Letters (1998) and the Harvard Academy of Arts and Sciences (2004), Tower has a Guggenheim fellowship (1976) and an honorary doctorate from the New England Conservatory (1972); has received commissions from the New York Philharmonic; and has served as composer-in-residence for the Chamber Music Society of Lincoln Center, the Orchestra of St. Luke's, the St. Louis Symphony Orchestra, and other esteemed ensembles. In 1993 she composed Stepping Stones for the Milwaukee Ballet, and later ended up conducting a segment of the work for a concert at the White House. Not too bad for the daughter of a nomadic mineralogist.

Made in America
By Joan Tower
Update Required To play the media you will need to either update your browser to a recent version or update your Flash plugin.

Born in New Rochelle, Tower spent her earliest years in nearby Larchmont. She started piano at age six, initially transfixed by Chopin. "I just fell in love with [his music]," she recalls. "Chopin just has this incredible combined sense of melody and harmony. His music is very piano-centric, unlike with Bach or other composers, whose music you also hear played on harp, guitar, whatever. Chopin's DNA is the piano. And since I was discovering the instrument back then, that just made his music even more magical." When she was nine, her father took a job in the mining industry that saw the family resettle in South America. "It was kind of a jolt, coming from Larchmont, which was very comfortable, and going to where there were revolutions every week," Tower says. "But it turned out to be a great childhood education. I learned Spanish in two months—I guess I've always had a good ear."

The clan lived in Chile, Peru, and Bolivia, and the composer traces her love of percussion, dance, and rhythm to her time in the latter. "I had an Incan nanny who used to bring me to the All Saints Day celebrations in La Paz," she says. "The musicians would hand me native percussion instruments and let me play along." The future luminary also got into her share of trouble as a young expatriate, however. "I used to flirt with surfers and visiting American servicemen," says Tower. "One time, the Harlem Globetrotters were in town and I invited them to our house. I called home and said, 'Hey, Mom, I'm bringing over some new friends!' Boy, was she surprised. [Laughs.] It must've been hell, bringing me up. I went to private school. You had to a wear uniform and all that. I wasn't good with rules. I was a rebel."

When the family eventually moved back to the States, as she prepared to enter college it looked like Tower's rebellious tendencies would continue to cause contention. "I was interviewing for admission to Radcliffe College [in Cambridge, Massachusetts], and after a few minutes the administrator said to me, 'You won't be happy here. You should check out Bennington College instead,'" Tower says. "So I did, and I absolutely fell in love with it. The professors were all in blue jeans, they were like-minded rebels themselves. Bennington turned out to be the perfect place. That Radcliffe administrator saved my life."

As encouraging as Bennington was, Tower didn't remain there for long. She next attended Columbia University, earning her doctorate under the operatically inclined Jack Beeson and electronic pioneers Otto Leuning and Vladimir Ussachevsky, and supporting herself by giving piano lessons. In 1969, she cofounded the Da Capo Chamber Players, which evolved into one of the nation's leading chamber ensembles. The group became the vehicle for several of Tower's most acclaimed early works, such as Platinum Spirals, for violin (1976); Amazon I, for flute, clarinet, violin, cello, and piano (1977); and Wings, for clarinet or alto saxophone (1981); as well as offerings by Phillip Glass, John Harbison, and Tower's fellow Bard faculty member Kyle Gann. (Tower continued to play with the ensemble until 1984.)

During her Columbia years she immersed herself in the serialism movement. A stylistic revolution then being popularized in New York by Milton Babbitt and Charles Wuorinen, the modern serialist technique expands Schoenburg's notion of the defined 12-tone chromatic scale into other elements of music, such as rhythm, timbre, pitch, and dynamics, all of which can be grouped into fixed sequences (series), which are then themselves manipulated at intervals (often irregular) throughout a piece. Despite serialism's insurgent reputation, its method of disregarding "traditional" tonality grew wearying for its detractors—one of which Tower herself eventually became. "I grew to hate serialism," she groans. "I didn't really understand it. I just kind of fell into it when I was at Columbia, following Babbitt and all these other people around like a puppy dog. It took me 10 years to figure out I needed to get out of it." The transition that inspired her later works came in 1973, a year after she'd taken her position at Bard, when she witnessed a performance of Messiaen's Quartet for the End of Time (1941). Serial in nature yet richly melodic, the piece draws on birdsong and Messiaen's deep liturgical leanings and remains a landmark of modern chamber music. "[The performance] was, like, 'Whoah!'" Tower remembers. "It was just so straight ahead and powerful. Hearing George Crumb's Eleven Echoes of Autumn [1965] back then was also really influential."

The directness of Messiaen and Crumb that increasingly shaped Tower's own work is a quality mirrored in other aspects of her life. "Her music and her personality are incredibly similar," says Max McKee, a four-year student under the composer. "Which is to say no bullshit, totally straightforward. She knows who and what she is and what she wants. Studying with her is like getting inside her head; there's so much I've learned that's practically been by osmosis. But she's more than just a teacher. She has a really full relationship with all her students. It feels like she really cares and invests in us."

One of Tower's most talked-about compositions is Fanfare for the Uncommon Woman (1987–92), a five-part orchestral work commissioned by the Houston Symphony in 1986. Though intended purely as "an homage to Copland and an homage to women," there were those who nevertheless took its title as a parody of Copland's Fanfare for the Common Man or a political statement or both. "Naturally, I'm a feminist," maintains Tower. "I never thought [the piece] would become this big political thing, though. But people made such a big deal about it." Ironically, it would be her concerto Made in America (2004), which was bankrolled by the Ford Motor Company in the middle of the George W. Bush years and appropriates "America the Beautiful," that would make Tower an even bigger musical heroine.

A sweeping, panoramic epic that evokes the entirety of the nation's diverse landscape, from its colorful deserts, to its rocky peaks, its bustling urban centers, and, yes, its fruited plains and amber waves of grain, Made in America was commissioned via Ford's Made in America arts program for 65 small-community orchestras and performed in all 50 states. Peppered with pounding passages that might be interpreted as the iron fists of a power-hungry authority, the 2006 performance of Made in America by the Nashville Symphony conducted by Leonard Slatkin was released on Naxos Records, and in 2008 won Grammys in the categories of Best Orchestral Performance, Best Classical Album, and Best Classical Contemporary Composition.

Tower's 75th-birthday concert takes place at Bard's newly built, sonically stunning Laszlo Z. Bito '60 Conservatory Building (which she herself helped design) and doubles as a benefit for the college's Conservatory of Music composers scholarship fund. A hand-picked program of Tower's chamber works, the evening includes Très lent (Hommage à Messiaen), for cello and piano (1994); Up High, for soprano and piano (2011); Dumbarton Quintet, for piano quintet (2008); White Water, for string quartet (2013); and Simply Purple, for solo viola (2008), and will feature performances by soprano Dawn Upshaw, cellist Peter Wiley, the Horzowski Trio, the acclaimed Daedalus Quartet, and Blair McMillen, Kayo Iwama, and the maestro herself on piano. "I had always been intrigued by Joan's music, and I had actually wondered why she hadn't written much vocal music," says Upshaw, who was profiled in the April 2010 issue of Chronogram. "So I asked if she would please consider taking the leap and using me as her guinea pig. How tickled I was that she said yes!"

While continuing to compose and teach in earnest, Tower has lately also been busy helping to care for her 65-year-old brother, who suffered a debilitating stroke seven years ago. "He's at Northeast Center for Special Care, which is an amazing rehabilitation facility in Lake Katrine for traumatic brain injury," explains Tower. "He can't walk at all or speak well, so that's been tough. It gives you an increased sense of how blessed you are, just being able to do things like walking or eating."

But, as heartbreaking as seeing a loved one endure such hardships must be, does the satisfaction of being a triple Grammy winner at least help to offset the difficulties? "Oh sure, it's great, the Grammys are the most-known award in the world," Tower says. "But, at the same time, like I tell my students, awards are short-lived. What really gets you moving is your music. If you write good music, it will have a life of its own and take you much farther than any credentials ever will."

A concert celebrating Joan Tower's 75th birthday will take place in the main hall of the Laszlo Z. Bito '60 Conservatory Building on September 7 at 7:30pm on the campus of Bard College in Annandale-on-Hudson. Tickets for the Bard College Conservatory of Music Composers Scholarship Fund benefit are $75 (75 cents for students). Bard.edu/conservatory.