Jennifer Muller discusses the choreographing process ahead of her dance company's performance this month. 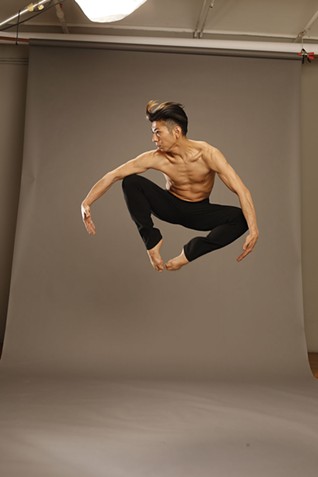 Although Jennifer Muller/The Works is in its 44th year, don't assume Mueller's chorography is of a bygone era, as her longevity actually gives her one of the most cutting-edge and prescient visions in the dance world. When commenting on present-day issues, regardless the decade, her messages are always spot on, containing hopeful outcomes and utilizing the highest caliber of dancers to realize her vision.

Choreographing since age seven, Muller attended the Julliard School, (studying with Martha Graham and Anthony Tudor, among other icons), was principal dancer with the José Limon Company for nine years and has created over 100 works.

A master of shape and juxtaposition, Muller's abstract works with bodies are comparable to Klee's and Kandinsky's works with paint. Her narrative dances are so rich, it takes more than one viewing to absorb their fullness.

"When choreographing, you have to need to speak about something, anything," says Muller. "I try to imbue this in my students when I teach. It doesn't have to be dramatic, it could be a circle. To develop this, I ask students to give titles to each others choreography as an exercise."

Muller's worked on productions for the Public Theater and New York City Opera and created choreography for dance companies as varied as Alvin Ailey and Nederlands Dans Theater. She's received grants from the NEA and Rockefeller and Harkness Foundations, among others.

Jennifer Muller/The Works has performed in most of the 50 states, most European and South American countries, Russia, China, Israel, the Kennedy Center, Jacob's Pillow, and Museum of Modern Art. The company will be performing of an array of Muller's work at Kaatsbaan on May 26, including excerpts from "Lovers" (1978), a collaboration with Keith Jarrett created in silence with Jarrett attending rehearsals and eventually improvising the score as he watched, and "Moon" (2003), a luscious work commissioned by the Richard Rogers Foundation for his centennial, choreographed to various renditions of Rogers's "Blue Moon," including sections using doo-wop group the Marcels and a Liza Minnelli/Robert De Niro duet.

Among the works shown in their entirety will be "Regards" (1991), a powerful solo depicting the isolation of being homeless, using songs from Tracy Chapman's haunting Crossroads album. Ultimately uplifting, it ends with the discovery of the home within, embodying Chapman's words, "All you have is your soul."

Perhaps worth the price of admission alone, "Miserere Nobis" (2014) is an exquisite homage to conflict resolution. Every aspect of this work reflects and complements the other; the choreography, lighting, red-footed costumes, and choral adaptation of Samuel Barber's Adagio for Strings (with Agnus Dei lyrics), compel us to enter the world of Muller's creation and be redeemed. "This is an entreaty for mercy and grace," says Muller. "In an age of unspeakable cruelty, loss, and grief, each of us asks forgiveness for all of us."

"Shock Wave," a collaboration with cellist Gordon Withers (creator of the cello version of Pink Floyd's Dark Side of the Moon album), a reaction to recent political upheavals sending shock waves around the planet, will be premiered. "Like a tremendous explosion that changes everything," says Muller. "What's the next stage, what will my reaction be to this devastation? Then, the healing."

The original print version of this article was titled:
"Dancing Works"