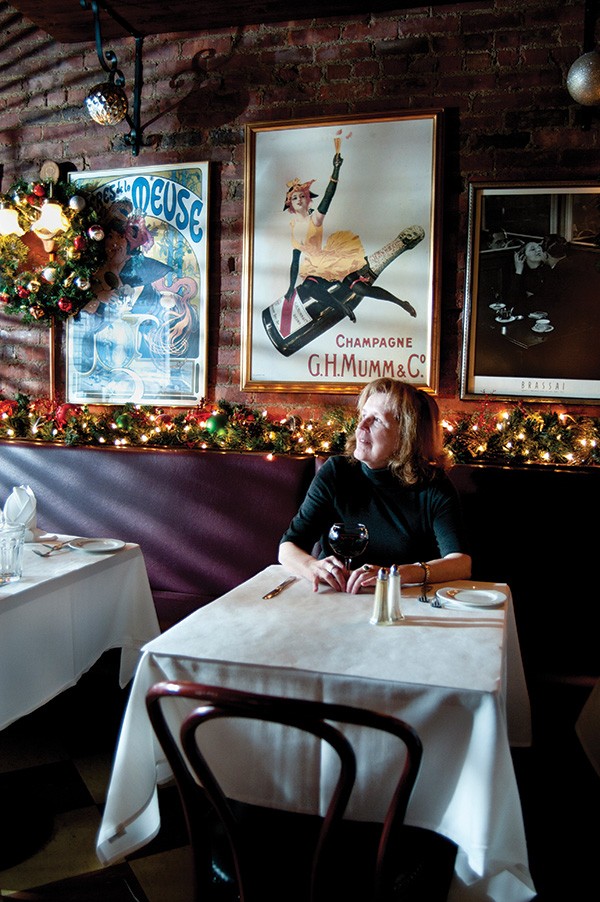 I think of myself as an escape artist. I like to take people away." Janet Hamill leans over a table at Kingston's Le Canard Enchaine, explaining why she's never kept journals and doubts she'll be writing a memoir anytime soon. The poet and spoken word artist continues, "I'm interested in creating worlds, not describing the one we live in."

Hamill's just-published Tales from the Eternal Café (Three Rooms Press, 2014), attests to her skill at spiriting readers to faraway places. Its 17 stories unfold in locales ranging from 19th-century Brussels ("Baudelaire at the Prince of Wales") to hippie Morocco ("Tangiers Dejoun"); "Novalis" takes place in a Times Square magicians' supply shop and adjacent café.

"Café" is the magic word that links these disparate worlds, as Hamill's chameleon voice waves the silk over the hat. It's tempting, in fact, to take her book on a literary pub crawl, reading each tale in a different café, between sips of something thematically apt.

Though Tales From the Eternal Café is her first fiction collection, Hamill has published five books of poetry, most recently, Body of Water (Bowery Books, 2008), and recorded two spoken-word CDs. An ardent conversationalist, she has searching, intelligent eyes and a high forehead framed by a reddish corona of flyaway hair. Her speech has a distinctive New Jersey timbre; a Garden State Henry Higgins could peg her within a few turnpike exits of Palisades Park. (The vintage amusement park's closing, she says, was "one of the great losses to humanity. Oh, oh!")

Hamill was born in Weehawken, across the Hudson from midtown Manhattan. She was the second of five children, and her family soon moved to suburban New Milford, still tantalizingly close to the city she calls "a magical place." At 14, she was taking her younger brother and sister to Radio City Music Hall. Her father commuted to work at a Wall Street credit company; her mother kept house. "No one had ever gone to college. It wasn't that kind of family," she says. "The only reading material in the house was the World Book Encyclopedia and Golden Books." But the Catholic Church fueled her imagination. "Angels, God—the ritual of it—incense, flowers, the pageantry! I've never been able to handle the real world. I just found it bland and gray."

Bland didn't stand a chance. In high school, religion gave way to poetry, thanks to a "wonderful English teacher" who "looked like Greta Garbo; she'd been a floor model." After a weekend assignment reading Thomas Gray's "Elegy Written in a Country Churchyard," Hamill says, "I remember sitting in the living room on a rainy day and being completely transformed."

Gray's words—"If chance, by lonely contemplation led, / Some kindred spirit shall inquire thy fate"—may still have been ringing in her ears when she met another out-of-the-box Jersey girl at Glassboro State College. Patti Smith was a year ahead. She was majoring in art, Hamill in English. "We were part of a small beatnik coterie, both active on the literary magazine and in theater," Hamill reports. They acted, designed sets, directed; they read and wrote with a passion. Smith writes in her foreword to Hamill's Nostalgia of the Infinite (Ocean View Books, 1992), "In callow years we shared much trouble, much laughter and lavished our girlhood love on the likes of Byron and Rimbaud. Often, when not having the price for a proper supper, we would dine on one another's work, concord in the desire to one day create, not without sacrifice, something fine."

Of course they both moved to New York, working at bookstores all over Manhattan. "I worked at the Strand; didn't everyone?" Hamill says. "And at Scribner's, right on Fifth Avenue—I got Patti a job there. Barnes & Noble when it was just a textbook store on Broadway, and Cinemabilia on 13th Street—that place I still dream of. The characters there!"

By now, Smith was living with young Robert Mapplethorpe; Hamill appears many times in her award-winning memoir Just Kids. "Those are the best times. You can never go back to that," Hamill says of their downtown apprenticeship.

Despite the nostalgic glow, she adds, "I always felt I was slightly too wholesome. I couldn't handle the suburbs, but I wasn't quite wild enough for the Chelsea [Hotel] scene. I lived my own kind of bohemian life—I used recreational drugs, it was okay to have sex without being married, but that was about as radical as it got. I did acid, but only on weekends. I had to go to work. I think that kept the lid on it."

Nevertheless, Hamill moved to San Francisco in 1970. "I caught the tail end of the Summer of Love madness that was still in the air," she reports. But she dreamed of traveling to Africa. She and her boyfriend managed to save up $3,000, which seemed like a fortune at the time, and crossed the Atlantic on a Yugoslavian freighter.

"That was the greatest thing in the world," Hamill says of the ship, which sailed from the Brooklyn Navy Yard to Casablanca. From there they went to Marrakesh by train—"the famous Marrakesh Express," Hamill says. "I was finally someplace truly exotic, as exotic as New York City had seemed to me as a child growing up and looking at it across the river from Weehawken."

They spent nearly a year exploring North Africa and the Mediterranean. "My boyfriend wanted to stay in the Greek Islands, lie on the beach and get a tan, but I insisted, no, we have to go through with this." Despite Hamill's fear of air travel, they flew from Athens to Cairo, abetted by a tranquilizer from a one-armed Norwegian with a medicine pouch. They made it to the Serengeti, where they saw lions in their natural environment. Hamill pauses. "I've never been able to write about that," she says quietly. "There are some things so spectacular you can't put it in words."

Besides, she asserts, "I can't write when I'm traveling. I have to be in my study, surrounded by my books. Much as I love to wander, I have to have a home base to come back to, where I can write it out."

By the mid-1970s, she was performing at the St. Mark's Poetry Project and other downtown venues. Her first book of poems, Troublante, was published in 1975, the same year her old friend released Horses.

Long a champion of spoken-word performance, Hamill started adding music to the mix in the 1990s, after opening for Patti Smith at Summerstage. "I was thrilled," she recalls. "There must have been 3000 people. I was in my glory that night."

Bass player and Feelies manager Bob Torsello saw that performance and sought her out, coaxing Hamill to perform with a band. In a short documentary about their collaboration, Hamill recalls, "I really had no interest. All I wanted to do was be a good poet."

Torsello wooed her with spoken-word/music recordings he liked, and eventually she agreed to a rehearsal session. It clicked.

"I bring a poem I think is suitable to be adapted to music," she explains. "Maybe have some kind of music in my head that I can reference. I love rock'n'roll... the Velvet Underground, the Doors. Sometimes we just improvise. We work it and work it till we get it right." The band, now called Lost Ceilings, has joined her at such venues as Seattle's Bumbershoot Festival, Pittsbugh's Andy Warhol Museum, and New Year's Day at St. Mark's Church; they've also played at Woodstock's Wok'n'Roll.

Throughout, she was writing poems, prose poems, and eventually stories. "I found I would come up with characters and situations I didn't feel were suitable for poetry. They needed a different outlet," Hamill says, adding, "Fiction is such a leap from poetry, which is such condensed, economical writing. You have to consider character and narrative."

She gravitates toward exotic locations and tales with "some kind of twist. I wouldn't ever have started to write fiction if not for Borges. I love Italo Calvino, the fabulists. It's not science fiction, it's writing about the marvelous." Indeed, in her café tales, statues smile and grieve, monks dream of trees flowered with birds, and a knowledge-starved girl leaves her body to commune with her grandfather's ghost. Some are more earthbound, like the hilarious tale of a brazen publicist trying to con her Felliniesque uncle into casting her lox of a boyfriend. But by the book's end, the stories have transubstantiated, leaving the physical realm of the café to pursue its mysterious spirit.

Hamill left city life behind when her husband, musician and technical writer Joe Csida, inherited a townhouse in an "amorphous" corner of Orange County. "The life I lived in New York no longer exists," she says bluntly. "It's not possible to live the bohemian life anymore."

But you can still write about it. She plans to follow up Tales from the Eternal Café with another collection of poetry, and then to burrow back into more fiction. "I'll write till I drop," she says.

And about that memoir? Janet Hamill shrugs. "Maybe 20 years from now, if I'm still ticking. If someone should ask." Her ironic smile expands into a full-bodied laugh. "If I still have a memory."