After a long day on the slopes, you’re exhausted, happy, hungry, and searching for the nearest sit-down restaurant. You exit Hunter ski resort and—like a light at the end of the tunnel—an Alpine tavern rises up across other side of the road—Jagerberg Hall.


Since opening right across from Hunter Mountain on February 22, Jagerberg has rapidly become a go-to place for people to kick off their ski boots, order a brew, and sink back in tired contentment. “We get a lot of ski weekenders, people who have weekend houses, locals, and some people visiting from the city who are staying at AirBnBs,” McGalliard says.

As a resident of nearby West Kill, owner Kim McGalliard noticed the need for an eatery within Hunter Mountain’s immediate vicinity. The German-style beer hall is named after its 4,000-foot neighbor—“Jagerberg” is German for Hunter Mountain.


“We went through this whole long process to find the right name, and this seemed to be the one that really worked,” says owner Kim McGalliard. Thus, the concept for an Alpine tavern was born.

Jagerberg’s comforting cuisine is a huge part of what keeps skiiers and snowboarders coming back. Chef Christie Flanagan has helped to focus the menu’s German concept. The CIA graduate has worked in the restaurant business for nearly 25 years and founded Napolitano’s Brooklyn Pizza in Providence, Rhode Island. Now, she returns to her home state of New York at Jagerberg Hall.


“She’s done an amazing job of taking the German concept and freshening it up some,” McGalliard says. “With German food, people typically think of heavy, really filling plates. We still giving nice portions, but it’s light and there’s vegetables. Everything is homemade, with exception of rolls.”

The restaurant is still rolling out the entire menu. Recently, they added the Jagerschnitzel, which is a rich and crispy chicken schnitzel with roasted, sauteed mushrooms—served with mashed potatoes and swiss chard.


“I think it’s good comfort food for a lot of people, especially in the colder months,” McGalliard says. “Plus, German food goes really well with beer.”


Jagerberg Hall has an upcoming event that beer lovers will enjoy, a post-Tap NY party, “Tap Takeover.” West Kill Brewing and Sloop Brewing will be onsite pouring at Jagerberg Hall after the event at Hunter Mountain on April 28 from 3 to 10pm. The next morning, the restaurant will host a Brewer’s Brunch from 11am to 3pm. Both events are open to the public.

A Place to Relax

Jagerberg Hall’s interior only adds to its mountainesque vibes. The building blends Alpine structure with modern sensibility. Inside and out, wooden beams, floors, and walls recall a classic mountainside lodge. Historic photos of skiers, hunters, and hikers are hung around the restaurant giving it a rich antique feeling, while the black and white color scheme and simple lighting fixtures give it a modern touch. “The design is clean, not cluttered. People say it’s warm, cozy, and light,” McGalliard says.

The restaurant seats 75 people in its two-floor space. The first level is the beer hall, fresh with long, communal tables and a metal bar top. The tables were crafted by woodworker Clifton Rabuffo and his team at Catskill Custom Homes, who also helped with the building’s overall renovation. The bar’s sleek, zinc countertops were made by Chris Bernard of Metalworks LTD in Kingston.


Upstairs, there is a more private dining area and a deck with outdoor seating. As the restaurant enters its first spring season, outdoor seating will also be available on the ground floor.


Jagerberg Hall is open Thursday through Sunday from 3pm to 10pm. The restaurant is participating in Greene County’s restaurant week, “Dine In Greene,” through April 15. Visit Jagerberg’s website for details on this and more upcoming events. 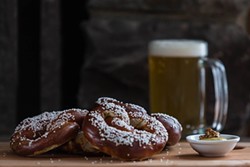