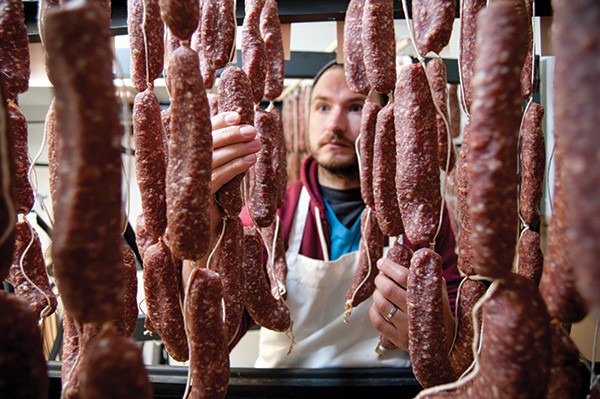 Before my tour of Jacüterie's headquarters at Herondale Farm, I had never seen a smoking chamber. In my mind, bacon was surely born in an imposing brick oven pregnant with woody fragrances, but when I stepped into the curing facility, I saw no such thing. The room looked and smelled like a professional kitchen, clean and unassuming. The doorways were hung with wide plastic ribbons, and in a corner, squatting beside a desk, was the smoking chamber. It could easily be mistaken for a filing cabinet. To my astonishment, I learned that half of Jacüterie's meat-curing magic happens inside that little metal box, and the other half happens in what looks like little more than a walk-in closet outfitted with fans, a dehumidifier, and an air extractor.

With just one curing chamber, one growing season, and his own two hands, Jacüterie founder Jack Peele has created a considerable buzz among Hudson Valley carnivores. His humble charcuterie produces four different varieties of bacon, five sorts of cured sausage, and four types of fresh sausage using organic, locally sourced ingredients and Peele's own original recipes. Most of the pork, lamb, and beef in Jacüterie's products are sourced onsite at Herondale Farm, which his father, Jerry, has been managing for the past 10 years.

Peele says Jacüterie strives to "bring flavors and traditional recipes from around the world to the local scene using local ingredients." He must be doing something right, because his products routinely sell out—especially the salamis, of which the Alpine cervelat and the Finocchiona, an Italian fennel sausage, are the most popular. But the fresh sausages and bacon are flying off Herondale's farm store shelves as well. There's the Bombay Banger, enjoyed for its breakfast-sausage sweetness and curry undertones, and the mint-infused Moroccan lamb merguez, which can add an earthy depth to any meal. Peele also claims to be working on a new, "extremely delicious" French-style saucisson sec seasoned with garlic and herbes de provence that he predicts will be a hit.

While there has long been a market among the sustainably minded for local, organic meats in general, Peele seems to have stumbled upon a burgeoning demand for cured meat in particular. Jerry believes the salamis have taken off for the simple reason that they taste amazing, but Peele identifies another likely attraction: "A lot of charcuterie involves using every single part of the animal. You're not wasting anything, and I think that's very important. By using every single part of the animal, you're honoring it better and giving it more of a purpose." Whereas butchery saves only select cuts for market, traditional charcuterie makes use of internal organs and parts of the head, back, and feet that usually go to waste. Peele already incorporates neglected back fat in his salamis and has been experimenting at home with recipes using other parts, such as pork liver.

But saucisson sec differs from your standard fresh cut in one other important department: intensity. The curing process distills the meat's natural flavor, turning salami into a contemplative food that insists on being savored. The Alpine cervelat, for example, boasts a peppery bouquet of mustard seed, nutmeg, ginger, and coriander, pairing well with mild hard cheeses, like caciocavallo. Best served in small portions and good in the refrigerator for over a year, the salami may perhaps reign supreme as the ultimate slow food.

Power to the Plant Eaters

The Other Red Meat