Iva Bittova: A Voice in the Wilderness 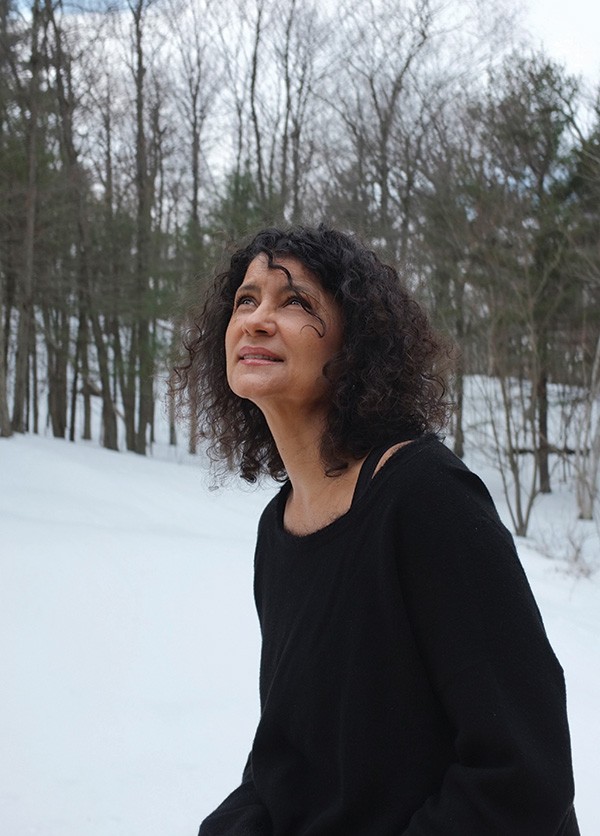 The invitation in the e-mail was curious. "If you don't mind, I can invite you to come to our little house in the woods," it read. "Tuesday around 2pm is fine." Having yet to actually speak with Iva Bittova but knowing she hails from the Czech Republic, one could almost hear the accent, and the image of a cozy, Slavic-folk-tale cottage in the forest with a smoking chimney came instantly to mind. The rural roads leading to the home proved challenging to your music editor's low-grade GPS. But, after a few wrong turns, he eventually made it. Turns out, it's a raised ranch in Rhinebeck. Still, cozy it is, and here we sit at Bittova's dining room table. "I still also have my 'nest' in [Czech region] Moravia; it's beautiful and green there as well, but also more noisy," says the violinist and vocalist, who cites "total silence and an absolutely positive atmosphere" as key inspirations for her highly haunting art. "In quiet and beauty and being close to nature," she explains, "I can find easily the good energy for my music."

Ruža - Iva Bittova
Update Required To play the media you will need to either update your browser to a recent version or update your Flash plugin.

Permeated with impressionistic elements of classical, experimental rock, opera, jazz, and the folk styles of her Eastern European heritage, Bittova's intoxicating approach has made her one of the leading figures of the contemporary Czech avant-garde, and one of the few to make a mark abroad. An actor as well, she has appeared in several feature films, most notably 2003's Oscar-nominated Zelary. Music, however, came first for Bittova, who was born in 1958 in the town of Bruntal. Her father, Koloman Bitto (her own surname is the feminine form), was a well-known composer and multi-instrumentalist of Hungarian-Romany extraction, while her mother, Ludmila Bittova, was a professional choral singer. "My father played many different instruments [including double bass, trumpet, cimbalom, and guitar] and was not completely crazy about any one genre of music; he would listen to classical and jazz or folk and gypsy music," says Bittova, who began ballet and violin lessons at around age seven and played child roles in theatrical productions. "I think it was my parents' dream for me to be a concert violinist, but for me then at that age it was too difficult. I was still trying to figure out what I should do. So when I was about 13 or 14 I stopped music to study acting."

The family moved to the city of Brno, where Bittova studied drama at the celebrated Brno Conservatory (founded, perhaps ironically given that she would later perform his music, by famed composer Leos Janacek) and for the next decade made her name in predemocratic Czechoslovakia as a prominent film, television, and radio actress. But despite her success in that medium things didn't sit quite right for the creatively restless artist. "I never really liked acting so much," says Bittova, who does still occasionally take film roles. "By the early 1980s I was beginning to feel that music was a better way for me to communicate and express myself." After having studied voice as part of her drama curriculum, she returned to studying violin and began to develop her distinctive method of vocalizing in a detached, incantatory, and sometimes spoken-word style above the keening, meditative drones of her instrument. "When I first began to sing and play it was very hard for people, they were very confused," she recalls. "They said, 'Who is this crazy woman with her screaming violin?' It was hard, and they didn't understand."

But there were, however, some who did. Despite the attempts of the country's Iron Curtain government to stamp it out, from the late 1960s to the early 1980s a boldly dissenting arts subculture thrived in the hidden shadows of Czechoslovakia. Dubbed the Czech underground and centered in Prague (the movement is also referred to as the Prague underground), it began as a reaction to the Soviet-backed suppression that arrived during the Prague Spring invasion of 1968 and included politically outspoken experimental and psychedelic rock bands like Plastic People of the Universe and DG 307 and writers like Vaclav Havel, whose forbidden works were circulated covertly as hand-copied samizdats. The scene culminated in 1989 with the Velvet Revolution that saw Havel elected as the newly independent country's president, but under the old regime many of its artist-participants were put on trial, imprisoned, or simply denied the state-mandated permits needed to perform. With her adventurous sound and progressive views Bittova fit right in with her underground comrades, although the abstract, not directly political nature of her music kept the befuddled censors at bay. "When I would play my works for [government permit-granting boards], they would just say, 'We don't understand at all what you are doing, so we guess it's okay,'" she says, laughing. "And so they would just let me go ahead with it."

Iva Bittova and Others Perform in Stone Ridge on Saturday