Is Rice the Hudson Valley's Next Crop?

Rice, which is technically a grass seed, is the world's third largest crop, accounting for a fifth of the calories consumed globally. Despite being dubbed New York's bread basket, the Hudson Valley hasn't participated in any of the world's rice cultivation—until now.

On the rice industry website Thinkrice.com, New York isn't even on the map. But in West Africa among the Jola, where Hudson Valley rice farmer Nfamara Badjie grew up, the grain has been central to survival for centuries, masterfully cultivated among the mangroves. Rice is a better source of carbohydrates, calcium, iron, thiamin, pantothenic acid, folate, and vitamin E than maize, wheat, or potatoes. But more than just what’s for dinner, it’s the linchpin of a culture that also emphasizes cooperation and hard work.

In 2013, when Badjie and his wife Dawn Hoyte purchased the six muddy acres in Ulster Park that would become Ever-Growing Family Farm, his dream of bringing West African rice growing practices to the Hudson Valley seemed hopeful at best. “My wife and a lot of others thought I was crazy at first,” laughs Badije, who spent his early life in rice fields in Gambia. “I was pretty sure I could make it work.”

Badjie came to the US in 2005 to join his cousin Moustapha Diedhiou and play bugaraboo drums. (He still does, often joining Gus Mancini’s Sonic Soul Band onstage.) He met Hoyte, a dancer, at a gig; besides music, the couple shared a love of growing food. Buying a farm together was a logical step. But a rice farm?

"Yep, I absolutely thought he was crazy," Hoyte says. "Turned out he knew what he was doing.”

The first season was all about producing seed, which had to be sought out and purchased by the spoonful. Rice paddies were constructed by hand using traditional kajandu (shovels), planting requires standing in the water. Early harvests were done entirely by hand as well, with rice taking over the whole house. “It was drying in every room, on every surface,” says Hoyte. To winnow, the crew, consisting of the couple, their children, and cousin Moustapha, tossed rice in plastic flying-saucer sleds, a makeshift substitute for the baskets used back home. And in those days, milling the crop used to mean a drive to Vermont.

But adapting a food commodity to a new climate is important work, and the farm has attracted an important ally: Cornell rice expert and agronomist Erika Styger, associate director of Cornell’s Climate-Resilient Farming Systems program. Styger helped the Ever-Growing team secure a $14,000 Northeast Sustainable Agriculture Research and Education (SARE) Farmer Grant in spring 2019, and is serving as technical adviser to their Hudson Valley Rice Project. 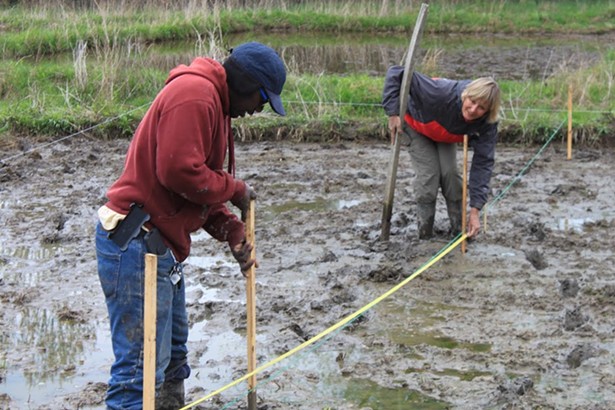 “She’s been working on sustainable rice production around the world for over 10 years, and the system of rice intensification she’s been working on is consistent with what we’ve been doing,” says Hoyte. “We’re comparing methods and strains. The intention is to see how long we can expand the season.”

The grant funding helped buy a combine, “saving us thousands of hours,” says Hoyte. “We started with nothing but a traditional shovel that came from Africa in a suitcase, and we manage to invest a little more each year and get key equipment.”

When Ever-Growing moved from the Akaogi method of cultivation used in Vermont to a traditional Jola method in 2018, results were faster and cheaper. The 2019 harvest, says Badjie, was the best yet. The farm had seven varieties to sell last November, as well as highly nutritious rice bran,

At harvest time, their Ulster Park home is filled with bags of rice. Most of the product is brown rice, but they also have a polisher to produce white. "Every year, we’ve added strains: Italian, Japanese, Russian, African," says Hoyte. "Each has its own unique aroma and flavor. The Japanese favorite is sweet rice; people come up from New York City to buy it.”

They’ve been approached by chefs, but are holding off on selling to restaurants for now. “We want to make sure we can feed the local community first,” says Hoyte. “To the Jola, success is connected to doing things right. In the traditional harvest, 10 percent of the rice goes to the people in need of food. We send 10 percent of our profit to Africa so they can buy their own rice there.”

Hoyte and Badjie both work day jobs, and they’d love to get to the point where one of them could farm full time. But no matter how well they do, some things won’t be changing: the students from Woodstock Day School, where Badjie works on the grounds, come to the farm each planting season to enjoy the traditional planting songs and drumming, and the community is invited to come help harvest. "No matter what happens," Badjie says, "we’re going to keep doing that part.”

To get in touch with Ever Growing Family Farm, reach out via Facebook, call (845) 750-7168 or email evergrowingfamilyfarm@gmail.com.

10 of the Best Restaurants in Dutchess County

8 Columbia County Restaurants that are Worth the Trip

An 'Uncultivated' Approach to Cider