Here are some things to know about the Great Lakes: they are young—forming at the end of the last glacial period, 14,000 years ago; they are connected and flow into each other, eventually dumping into the Atlantic Ocean; they hold 20 percent of the world’s freshwater; until the completion of the Erie Canal in 1825, the Great Lakes were an isolated ecosystem.

The last 200 years has seen ever greater connectivity between the outside world and the Great Lakes, with the widening of the St. Lawrence River into a Seaway open to international ships; the building of the Welland Canal to bypass Niagara Falls, once an impassable barrier; the building Chicago Canal, connecting the Mississippi River to Lake Michigan. These engineering marvels created unforeseen consequences for the lakes, allowing invasive species like the sea lamprey and zebra mussel to be imported via international ships ballast water tanks, devastating native species and irrevocably altering the lakes’ ecosystem.

In The Death and Life of the Great Lakes (Norton), Dan Egan, a reporter for the Milwaukee Journal Sentinel, documents the human-wrought havoc and the complexity of the problem currently facing the lakes and, by extension, humanity. On October 27, Egan will discuss the perils facing the Great Lakes and the ways they can be preserved at the Cary Institute in Millbrook. (845) 677-53543; Caryinstitute.org.

Before the opening of the Erie Canal, the Great Lakes had a Galapagos-like ecosystem.

I like to refer to it as the front door and the back door: the front door being the Erie Canal, the Welland Canal, and ultimately the Saint Lawrence Seaway. The back door is the Chicago Sanitary and Ship Canal. Both of these pathways have opened up and exposed the lakes to all manner of biological mischief, particularly the Saint Lawrence Seaway. We now have more than 189 native species in the Great Lakes, and for a time, after the Seaway opened in 1959, they were finding a new species in the lakes every six to eight months. That’s been dramatically reduced in recent years, but that door is still open.

The book reads as a comedy of errors in a way, as you document the different invasives that are coming in. You start with the sea lampreys, then the alewives, then the salmon, then the zebra and quagga mussels, and now the carp. Where does it end? Are new invasives just going to keep coming in?

Well, both doors are still open. The shipping industry should be credited with taking some steps to reduce the number of organisms they were discharging into the lakes through their ship-steadying ballast waters. They’re now flushing those tanks mid-ocean with salt water, the idea being that you expel or kill unwanted hitchhikers. But life finds a way. Just in the last six months, two new species believed to be brought in by overseas ships were announced to be present in the western basin of Lake Eerie. Then we have the Chicago Sanitary and Ship Canal and the electric barrier that’s supposed to keep the giant voracious Asian carp out of the Great Lakes, but that barrier has a history of leaking fish, and just this summer they found an Asian carp beyond that barrier near the shores of Lake Michigan. You find one fish—it’s like if you find a cockroach in your kitchen and you kill it, you probably haven’t solved your cockroach problem. So, these threats still exist. You talk about it as a comedy of errors. I don’t see it that way. It’s easy to swat your hand to your forehead looking backwards, that’s the luxury that we have. A lot of these projects seemed like a good idea at the time. I guess the question now is: At what point are we going to learn and take adequate steps to stop this onslaught of biological pollution?

In your book, you also talk about how Lake Mead and Lake Powell in the West have been overrun with zebra and quagga mussels. This happened because people brought their boats from infested Eastern lakes. Given our globalized economy and the way we move so freely, how can we stop these species from moving along with us?

The Great Lakes invasive species problem isn’t just a Great Lakes problem, it’s a continental problem. The Great Lakes really are just a gateway for species from around the globe to get established in North America. Then it’s off to the races. That’s why we have this quagga mussel problem out West. But what can we do about it? Well, I think we can do a lot about it. First of all, there’s technology that’s emerging and improving constantly to better treat ballast water. You’ll never sterilize these ballast tanks that can hold millions of gallons of water. We can’t sterilize a hospital room, let alone a ship like that, but we can go a long way to reducing the risks. That said, if the big ships can’t get these treatment systems onboard fast enough or if they’re too expensive, there is another option on the table and that is: Maybe you don’t let them into the lakes. Great Lakes shipping is big business to the region and to the country, but the overseas component of that business is a sliver of the overall traffic that moves on the lakes. It’s five percent or less. It’s fewer than two ships a day during the nine-month shipping season.

Closing the Saint Lawrence Seaway to international ships seems like an easier solution. But what about the park rangers who manage Lake Mead and Lake Powell, where hundreds of boats a day come in and out of the water each day and inspections for mussels can take hours? As I recall, one of these park rangers basically threw up their hands and said, “We can’t do it.”

Out West it’s like trying to eradicate fleas with butterfly nets. That’s why prevention is so critical. But the hell of prevention is, if you do it right, nobody will really appreciate it. There were early warnings back in the `80s and prior that these oceangoing ships could bring mussels into the Great Lakes and we didn’t do anything about it. Suppose we had, suppose we did take a radical stance at that time and blocked those relatively few overseas ships from sailing into the lakes. Nobody would realize what we preserved and saved in the process, what we avoided, all they’d remember is we killed a perfectly good industry. It’s a tough position to be in, but at some point, you gotta learn from the past. And I hope we’re getting to that point. 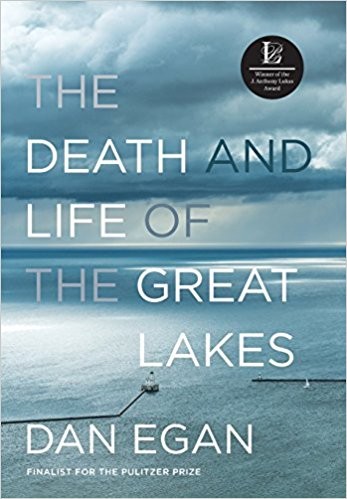 Buy The Life and Death of the Great Lakes here.

The original print version of this article was titled:
"The Invasion of the Body of Water Snatchers"

The Holistic Landscaper: How to Integrate Native Gardens with Your Local Ecosystem Sponsored