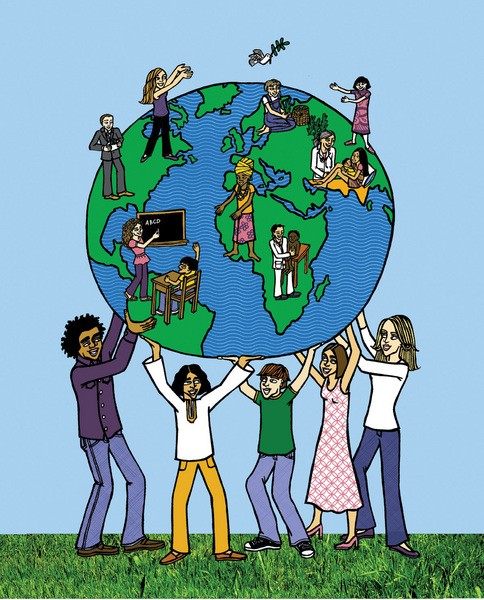 You’re getting the word out about some of these issues as well as directly working to make progress on them. Do you want to say a bit about that?
A lot of people are taking action in their own ways, and you see all the impulses by people who want to help and serve. These efforts are very important. An example is RESULTS [www.results.org], a grassroots antihunger and antipoverty group. Their mission is to empower people to use personal and political power to end poverty in this country. When President Obama was campaigning for office, he suggested that the US kickstart the Global Education Fund. But that subject has not come up again. So RESULTS is very much supporting legislation—HR 5117, the Education for All Act of 2010—that is up in Congress now. Supporting that bill is a direct action we can all take right now so that developing nations have our support to educate each of their children at the primary-school level.

I also strongly support the Millennium Development Goals. In the year 2000, all 189 members of the United Nations came together and agreed on a set of global goals and set the year 2015 as the deadline to achieve them [www.un.org/millenniumgoals]. I am particularly attracted to the Millennium Goals because it is a collective global effort to achieve eradication of the greatest sources of suffering. The goals include cutting extreme poverty and hunger in half, achieving universal education for children, promoting gender equality and empowering women, reducing child mortality by two-thirds and maternal mortality by three-fourths, halting and reversing the spread of HIV/AIDS and other diseases, ensuring environmental sustainability, and developing a global partnership for development. On September 20 I’ll be speaking at a summit meeting at the United Nations, called by UN Secretary-General Ban Ki-moon to accelerate progress on these goals.

You’re the founder of the Peace Alliance, and working toward creating a Department of Peace within our federal government. Can you tell us about those movements, and where the effort to create such a department stand?
In 2001, I started a group called the Global Renaissance Alliance. It has grown and evolved into the Peace Alliance and the Peace Alliance Foundation, which empower civic engagement toward a culture of peace [www.peacealliance.org]. The Peace Alliance is a network of organizers and advocates across the country, including volunteer grassroots teams in hundreds of cities and schools and colleges.

One of the things the Peace Alliance is working on is establishing a cabinet-level Department of Peace. In 2003 Congressman Dennis Kucinich introduced legislation to do that. The idea is to develop a department in the executive branch of the federal government with the sole purpose to research, articulate, and foster nonviolence options to resolve issues domestically and internationally. Kucinich’s idea was that if we could identify all the extraordinary ways that people in the world are already working on projects that foster brotherhood and genuine justice, we could therefore foster peace. Violence is the absence of peace. There are different kinds of peace. Negative peace is an underlying anxiety. Positive peace is based on brotherhood. We want to foster positive peace.

The legislation needs support in Congress, so call your representative’s office and ask if he or she already is a sponsor. If so, say that you are very grateful, and if not, that you very much would like them to be.

Is there something in particular that has made you so attuned to the struggles of others?
My father was an immigration lawyer, so I grew up in a home hearing a lot of stories about poverty. My parents took us traveling all over the world. I saw the contrast between the relative abundance in the United States and other places, which gave me a real gratitude and love of being an American, and also a deep sensitivity to what other people go through.
I also went through an experience where I suffered deeply, and while I was going through it, I looked at other people around me and wondered if they ever hurt as much as I did. The answer I felt in my heart was yes, they do, but I just never noticed before. When you suffer, you get an X-ray into the suffering of others. It makes you never again able to turn a blind eye to the pain in others, the way you might have before.

One of my favorite quotes from your book The Gift of Change: Spiritual Guidance for a Radically New Life is “The fact we think love is a fierce and awesome power doesn’t mean we’re wimpy thinkers.”
There are those who would denigrate a conversation about love as a broadscale social source of good. But would they denigrate Martin Luther King about it, or Gandhi? While it is easy to mock those who repudiate the dominant cultural conversation, the alternative conversation—a new, sustainable image of the world in which cooperation, sharing, and love are the bottom line—is indeed becoming more prevalent and sophisticated, and more obviously relevant to the times in which we live.

Love is a radical stance. The Course in Miracles talks about how a thought system based on fear dominates the consciousness of the human race, and has for ages. Gandhi said the problem with the world is that humanity is not in its right mind, and what is considered reasonable is arguably insane. Just look at the number of bombs on the planet. So to be considered sane is to go along with a status quo worldview that would be labeled insane.

It has always been true of people at the forefront of change—those who said we should abolish slavery, or give women the right to vote—that at the time, they are considered fringe, crazy people. We should not let that stop us from making love, rather than economics, the bottom line. Anyone who thinks we can continue as a human race the way we are now, with greed and domination and economic obsession as the organizing principles of human civilization as they are today, is naïve.

Your books have had such a strong following. That alone gives me hope, because it means that many people want to hear, and are being touched by, your messages about love. I wish everybody had the courage to act on those messages as they go about their day.
I think we are living in a time where it isn’t about theology, it’s about experience. The change of this time isn’t coming about because of soloists but because of a choir of people, each rising up out of the neurotic, narcissistic tendencies that have been holding us back. We might not all get to be enlightened masters, but while we are walking a serious spiritual path, being more loving and forgiving, compassionate, in service, and devoted to the possibilities for humanity in the future, we are collectively moving forward.

There are also very regressive forces that abound, and sometimes it feels there is a race for time going on, like the Titanic racing to the iceberg. However, we have the capacity as human beings to make a leap past what was probable when our minds were more narrow, into what is possible when our minds expand and our health expands, and we have more openness. With those internal dynamics, we will create something more beautiful than anything we can imagine, for us and for our children and for our grandchildren.