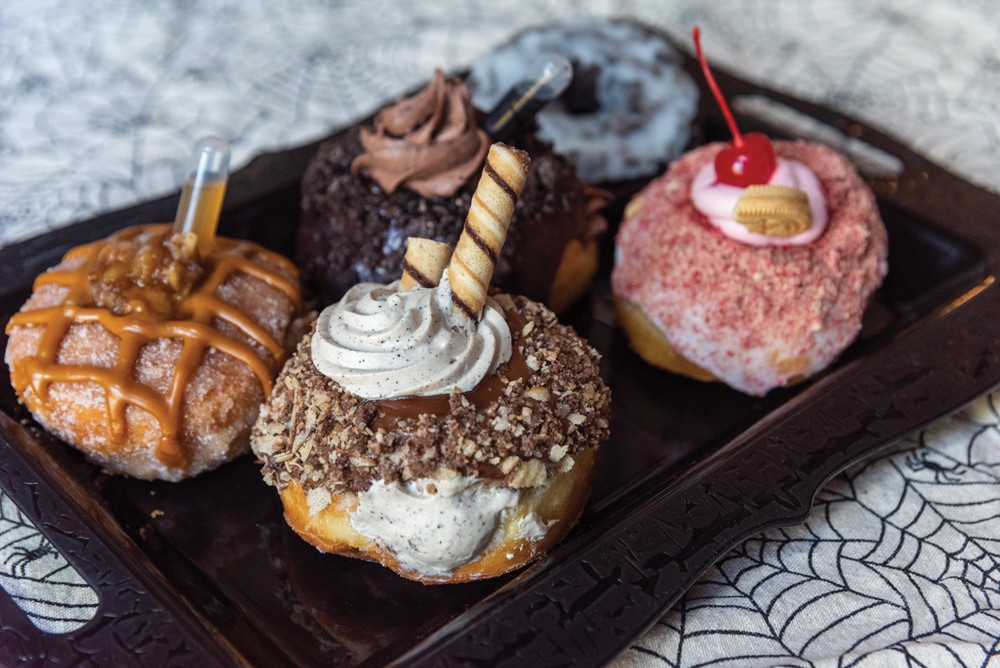 Within just two weeks of opening its doors in mid-October, Cosmic Donuts was already having trouble keeping up with its customers' insatiable demands. Two months later, the galactic-sized turnout the Kinderhook shop has experienced shows no signs of waning: Every morning, owners Jhori Jurgenson, her mother, Bonnie Tedder, and Jurgenson's partner, Jason Garvey, hope to serve everyone that shows up to patiently wait in a two-hour-long line wrapping around the block. The shop is selling over 1,000 donuts per day and the family trio is working as fast as they can to keep hot, freshly made donuts filling the pastry cases—but they end up closing early most days, after running out.

The force behind this astronomical frenzy? Giant, yeast-risen, filled-until-bursting donuts stuffed with sinful amounts of homemade buttercream, pie filling, and other sugary decadences that are then topped with out-of-this-world sweets like fresh-baked cookies, slices of cheesecake, and shooters of caramel or maple syrup to drizzle on top. To wash all those sweets down, Cosmic serves hand-roasted coffees from No. Six Depot of West Stockbridge, Massachusetts, including flavored coffees, lattes, and nitro cold-brew.

What eventually turned out to be a destination for donut lovers near and far began as a pipe dream years ago when Jurgenson, a makeup artist, and Garvey, a K-9 deputy sheriff with the Columbia County Sheriffs Department, competed together in bodybuilding competitions. The couple had to keep their bodies at a very low percentage of fat, but after their competitions were over, they'd indulge. "Part of competing was that we would always get a giant meal afterwards," Jurgenson explains. "We could finally eat, and it was our big reward. But we always wanted donuts and could never find a good donut shop nearby. We would have to drive for hours, so we thought, 'Why not open our own?'"


In May of this year, that's what they decided to do—and they've been going nonstop ever since, figuring out how to open a business while creating the menu and purchasing and renovating the Albany Avenue location to adequately reflect the playfulness of their planetary theme. "Honestly, we had no idea what we were doing," says Jurgenson, with a laugh. "We've never owned a business before, so it was a very learn-as-you-go kind of thing. But it all just fell into place. The biggest part of it was just finding time in our schedules, which are crazy to begin with, to go in and renovate the whole shop—we did it all ourselves." 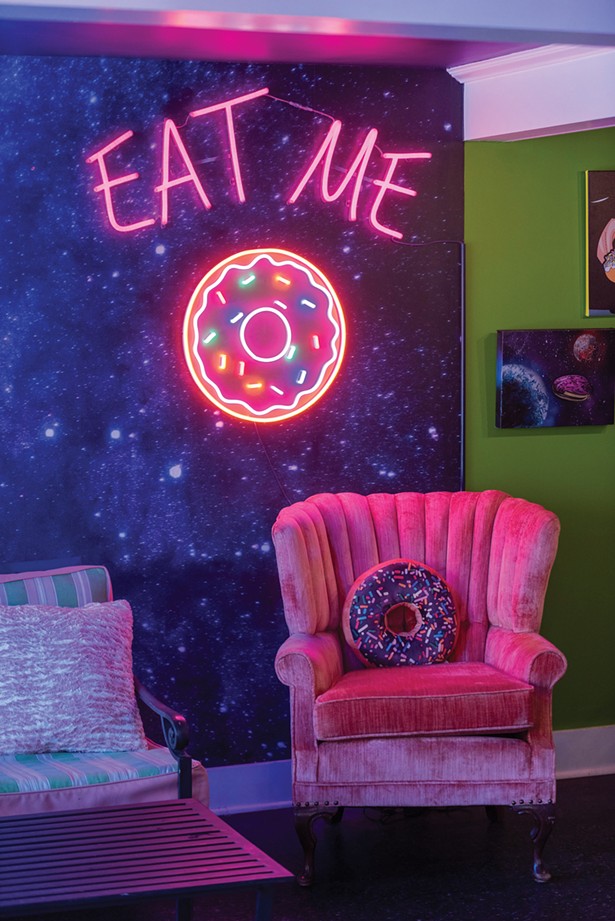 The results are impressive. The couple completely transformed an old storefront into a fun and wacky standout locale—one they hope will help bring new life into the village of Kinderhook. The newly reconstructed venue now boasts bright neon colors that glow under black lights; funky artwork featuring iconic characters indulging in donuts (like Homer Simpson, Garfield, and Banksy); and a cozy lounge with comfy chairs, fluffy throw pillows, and a galaxy wall where you can Instagram your loved ones (or self) under a bright neon sign reading "EAT ME."

Jurgenson and Garvey still work full-time jobs outside their time in the shop—and they also parent two boys (Jaxon, age 10, and Weston, nine months) who have both been along for the journey. "I've dedicated most of my time since wedding season is over to just being in the shop every day that I have to be. And my mom too. We're basically juggling work at the shop and life because we have two kids who we want to be with as much as possible. It's very much a juggle, but we make it work," says Jurgenson, adding that she often keeps Weston strapped to her in a baby carrier while she works. She feels fortunate, too, that the shop is so close to home so she can dart back and forth if she needs to, taking the kids to daycare, picking them up for school, or caring for their three cats and two dogs.

Despite their busy schedules, the trio were hopeful but apprehensive about opening a brick-and-mortar eatery during the COVID pandemic, but as they developed the menu and handed out samples to coworkers and friends, they were encouraged by a more-than-enthusiastic response—especially since none of the owners had experience actually making donuts.Jurgenson's stepfather owns Kinderhook's Samascott Orchards, a pick-your-own-farm and marketplace in Kinderhook where Jurgenson and Tedder worked in the bakery. Jurgenson loved to decorate cupcakes and learned to make buttercream, so she, along with Tedder, took that experience and used it to try new donut recipes. Getting the dough right, though, was the most important part. "There is a science to it," says Jurgenson. "The water temperature has to be right...the humidity. You have to take into account the temperatures in your kitchen. It's all about how the dough rises." 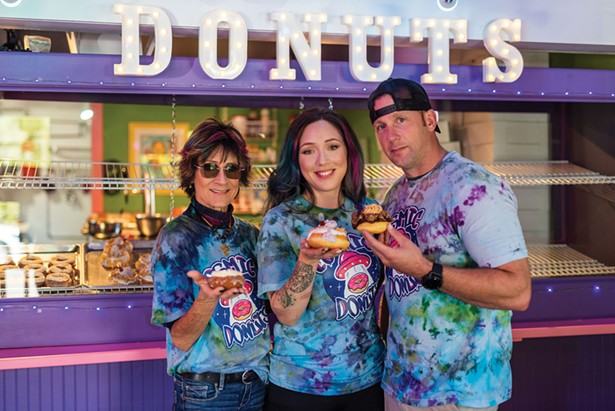 Once they found the perfect recipe, one that makes the dough rise enough and gives the perfect consistency, they started decorating and trying out different flavors. Friends, family, and coworkers helped the family by trying them out, and they were delighted to hear rave reviews.

To gauge interest, they also tried a few pop-up sales prior to their official opening, turning to Facebook and Instagram to document the opening and menu development process. Little by little, they built a large following that was already salivating before the shop even opened.As Cosmic Donuts posted pictures of sumptuous pastries from its ever-changing menu—like s'mores donuts topped with chocolate glaze, graham cracker crumbs, and toasted marshmallow crème; peanut butter bomb donuts stuffed with buttercream and topped with peanut butter glaze, peanuts, and peanut butter cookie dough; and apple pie donuts overloaded with apple pie filling, covered in cinnamon sugar and topped with sticky caramel and cheesecake buttercream—the response was immediate. "I would announce on Facebook that we would be having a pop-up sale, and our donuts would be gone in 15 minutes. It was insane," says Jurgenson.


On a typical day, Tedder gets to the shop around 3am to make and roll out the dough, and Jurgenson comes in shortly thereafter to make fillings and get everything else ready. After the donuts hit the fryer, it's time to decorate them and fill the cases before it's time to open at 7am. According to Jurgenson, it can get a bit crazy. "As soon as 6:30 rolls around, we sometimes have people waiting outside. It's like a mad rush. We're constantly trying to keep donuts coming out as fresh as possible—we've got donuts coming out of the fryer that are immediately being dipped and stuffed and filled, and they're going right into the display case. Sometimes there's a wait, but it's worth it because you're getting a fresh donut that's still hot when it goes into the box."

Donut prices range from $2 to $4, and Cosmic takes preorders by phone at (518) 610-8666 or through Facebook Messenger—and requires all orders over a dozen to be placed this way. They also plan to have an online ordering system in place soon and are working on developing new donut recipes for customers with dietary restrictions, like gluten-free and vegan, and peanut butter and oat doggie donuts for those out walking their pets. If you plan to give them a try, Jurgenson recommends getting there early, as they typically sell out of donuts by 1pm.

Plans for the shop include a catering menu for weddings and events and a food truck so they can take their donuts far and wide. They've also considered opening other locations, setting their eyes on either Troy or Great Barrington, but for now they're trying to keep up with the business they've already got. Hoping to give back to their community, they plan to have a charity they donate to every month, where someone designs a specific donut that, when each one sells, raises money for that cause.

But amid the insanity and overnight success, Jurgenson is happy to be doing it all with family. "Honestly, it's been really stressful and really crazy, and at times we're like, 'Oh my God, this is too much,'" she says. "But at the end of the day, knowing that we've all done this together, people love our donuts, and we're bringing something really awesome to the community. It's extremely rewarding."