I've always admired how authoritative, insightful, and succinct Mohonk Mountain House Greenhouse Grower Cheryl Hearty is when she talks or writes about horticulture. Hearty grew up in Dutchess County and went to SUNY Cobleskill for her associate's degree in floriculture (greenhouse production), which she earned in 1985. She worked for 15 years for garden centers and the big-box stores, specializing in indoor plants and annuals while soaking up knowledge about all plant material.

While sweeping up one day at the Home Depot in Wappingers Falls, she found a brochure for the Cornell Cooperative Extension (CCE) Master Gardener (MG) program on the floor. "Amazingly, even though I'd lived here all my life, I hadn't heard of CCE," she says. She took the training and served as an MG volunteer until a paid position came open in the CCE plant diagnostic lab. There, she diagnosed problems based on plant samples and dialogue with the people who submitted them.

In 1998, Hearty was hired by Vassar College to create and care for a diverse collection of plants for the biology department greenhouse. This part-time dream job was concurrent with her part-time CCE plant diagnostic lab job, which she also loved. In 2006, the full-time community horticulture educator opened up at CCE Dutchess County, and Hearty made the decision to go for it. There, she ran the community horticulture program, including the MG program, until early 2013.

After she and her husband, Joe, built a house in the woods in Ulster County, she faced a more formidable commute back to Millbrook. She decided to look closer to home and was hired by Mohonk to be a greenhouse grower. Someone more knowledgeable about greenhouse growing and indoor plants her new employer was unlikely to find.

Which is also why Hearty is the perfect person to ask about indoor plants (the more contemporary way of saying "houseplants," as it's more inclusive of the many different indoor environments where plants are grown). She loves them herself. She says, "They make your home homier, they purify the air, and they give you a living thing to engage with in the wintertime yet generally are forgiving when you neglect them in the summer." 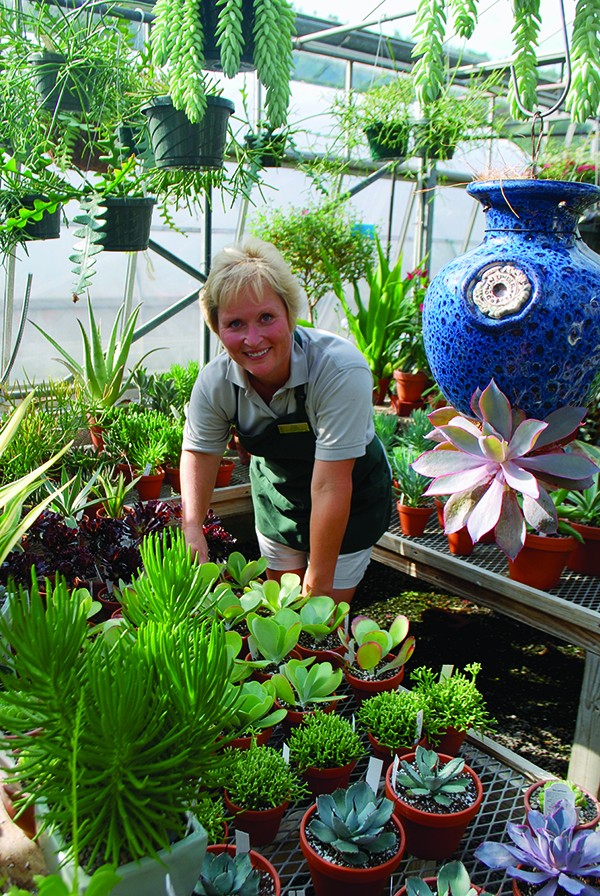 Ideally, determine your indoor conditions—especially light levels—before buying indoor plants. "A lot of times people take a more decorative approach to indoor plants, like wanting a palm that goes with a certain chair," she says. "But if there's not enough sun there, the palm won't do well."

As Hearty explains to Mohonk guests, high light comes from an unobstructed south-facing window, medium light from windows facing east or west, and low light from windows that are north facing or somehow obstructed. "Note that low light is not no light," she says. That's a condition no plant can endure for long.

"If you have high-light conditions, the world is your oyster in terms of all the plants you can grow, including flowering plants and succulents," Hearty says. "But low light is much more common, so you need plants adapted to that. There's also a benefit to low-light plants in that because they grow slow, they tend to need less water, fertilizer, and pruning."

For all indoor plants, Hearty recommends putting them in the shower periodically to remove dust from leaves, which can slow down photosynthesis. Washing the leaves will also cut down on spider mite infestations. A good soak in the shower also leaches soluble salts out of the potting mix, which get there from fertilizer and from the salts used commonly in water-softening systems (the salt buildup can cause brown tips and leaves).

Hearty also recommends that people rotate their indoor plants so that each side of the plant gets equal time facing the light, resulting in more even, compact growth. Lastly, she says it's important to acclimate your plants to the outdoors on their way out for "summer vacation" and before they come back indoors in the fall.

She says, "Plants, like people, can get sunburned. Even if the plant is in the sun in the house, the sun outside is much stronger, so after the danger of frost has passed in the spring, start them in partial shade outdoors and gradually move them into the sun. In the fall, before danger of frost, have them spend some time in partial shade so they're in less shock when you bring them indoors to low light."

'Silver Queen' snake plant (Sanseveria). Hearty says the snake plant is ubiquitous, but for good reason—it tolerates low light well. Instead of the boring green version found in dark corners of restaurants everywhere, however, she recommends the silvery leaves of 'Silver Queen.' Hearty says that when she moved into her house in the woods, she had to reckon with low light throughout. "This plant was one of the first ones I brought home from Mohonk, and it's thriving," she says.

Chinese evergreen (Aglaonema). Hearty likes the conventional green and silver foliage but says there is a version now with showy red streaks that is widely available. "I have one at home and I doubted whether, because of all the streaks (and resultant sacrifice of chlorophyll), it would perform well, but it does beautifully at my house."

Cast-iron plant (Aspidistra). This one gets its name from its use in Victorian times in proximity to cast-iron stoves. (It did equally well with the cold areas away from the stove.) Hearty says, "I've had one for years and it's probably the most durable low-light plant there is. The only problem they get is spider mites, so you have to keep the leaves clean; don't let them get dry and dusty."

Pathos (Epipremnum). These are the super-easy-to-grow plants that naturally form a vine, but they are more beautiful when pruned regularly. Mohonk has at least three different kinds for sale, and it's the one indoor plant Hearty thinks everyone should own.

Try This At Home