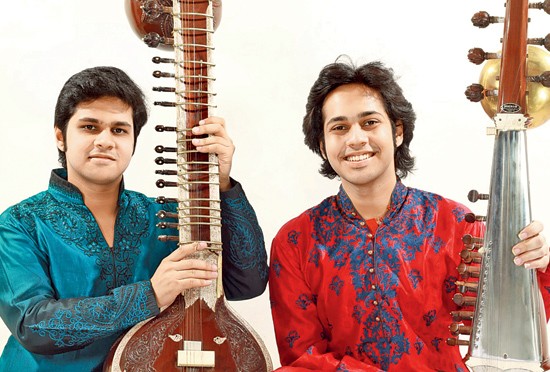 Although pioneered in the 1950s by master musicians Ravi Shankar and Ali Akbar Khan, by the 1960s the duo of sitar and sarod had fallen out of favor in Indian classical music as other instrumental ensemble formats took over. The rising, young Mohan Brothers, Lakshay (sitar) and Aayush (sarod), have revived this variation of juglandin (instrumental duet) to rapturous acclaim and will fill the grand auditorium of the Egg with their virtuosic and deeply meditative music on October 13.

Raised in Delhi—though not in a musical family, which is usually the case for traditional Indian musicians—the brothers were endorsed by Ravi Shankar himself, who encouraged and promoted their playing when they were children. Accompanied in concert by a tabla player (Nitin Mitta), the Mohans select a traditional raga (melody) to perform and improvise, making the most of their brotherly telepathy to deliver one stunning passage after another. This month, the pair visit the US for their second tour here, which is titled, appropriately, “Strings in Harmony.”

Watch this promotional trailer for the tour: