In the Land of Maple Leaves 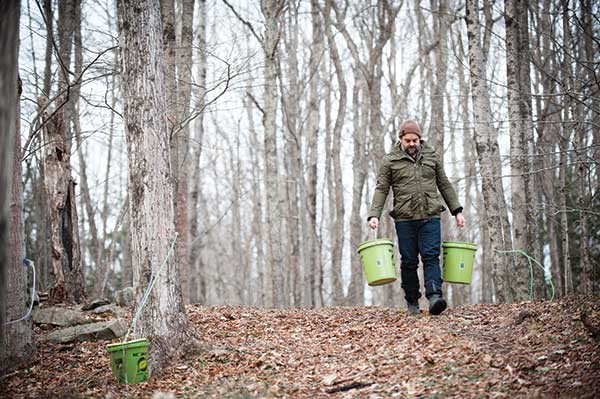 We're lucky. We live in a region that produces one of the most compelling sweeteners in the world. In the dark days of winter, unseen magic begins to stir deep inside our maple trees as sap moves stored sugars up from the roots to prepare for spring growth. After Vermont, New York produces the most maple syrup in this country (though Québec dominates the industry, producing 75 percent of the world's supply). We're all familiar with syrup, of course, but as with so many foods there is some real satisfaction to be had by chasing the stuff all the way up the supply chain—in this case, to the trees themselves.

Even if you have only one maple in your yard, like your faithful correspondent does, if it is of sufficient girth it can produce a startling amount of sap: two five-gallon buckets a day when the weather is right. Those 10 gallons of sap will yield a quart of syrup, since the reduction ratio is 40 to 1. Not a lot, maybe, but that's just one day. If you have kids, there's nothing more fun than teaching them the alchemy of sap. And it can become a lot more than just pancake syrup; it is very much worth exploring as an ingredient in and of itself.

Below-freezing nights and above-freezing days mark the beginning of sap season. Straight from the tree, it's water-clear, but containing between 2 and 5 percent sugar and other compounds that give it that inimitable flavor, in addition to minerals and amino acids. It's a delightful cold beverage, like water with a little something extra: Nature's own smart water. I freeze plastic jugs of it in my chest freezer to add thermal mass and so I can enjoy it on a hot day later in the year. (Try freezing sap into ice cubes and using them in cocktails.) If you have a seltzer maker, you could do worse than to carbonate some maple sap, either straight or cooked down a bit. 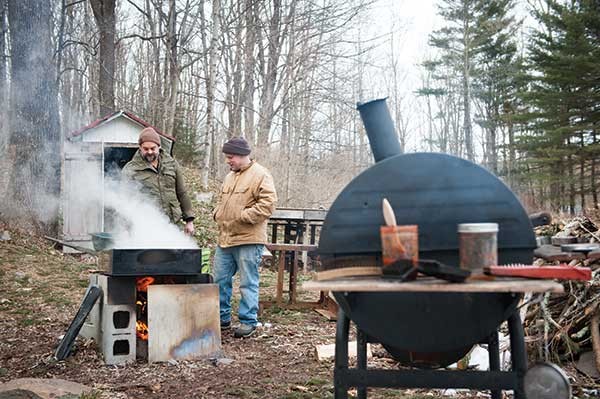 As it reduces, the color turns gold and the sweetness increases. Poured off into glasses, the sweet, steaming sap is the perfect a beverage for a cold March afternoon spent outside skimming and stoking the fire. As the reduction continues, other possibilities present themselves. At about five to one, it's ideal for braising pork belly or fermenting into vinegar. As it approaches syrup, very sweet but not yet viscous, floral and vanilla flavors become prominent, suggesting all sorts of dessert applications.

Commercial syrup is generally finished at 66 degrees brix, meaning 66 percent sugar by weight. If you have a hydrometer, determining brix is easy. You can also use your eyes and tongue to pretty good effect: If it's dark and sweet, it's syrup, though if you plan on canning it it's a good idea to be sure of the brix. You can also determine the sugar content with a candy thermometer, since finished sap boils at 219˚F. Some care should be taken as you near the end, because as it thickens it can burn easily if left alone, especially in a pan with a large surface area. If you cook it past the syrup stage, it becomes caramel, and can yield chewy or hard candy (or even granulated sugar) depending on how far you take it.

A few years ago, my friend Danny Blume decided to tap some of the many maples on his property outside of Woodstock. The first year he cooked the sap down on his indoor woodstove, and it took days. Now he has a cinder-block stove built behind his house that neatly accommodates a large rectangular boiling pan. An average day's haul from the taps we put in this year is somewhere around 30 gallons, with the bulk coming from a few venerable trees at the forest's edge. Thirty-gallon trash barrels—sunk into the snow that lingers on the north side of his house to keep it fresh—store the surplus until there is time to boil. Since he works at home, this is pretty often; he wanders outside every 30 to 60 minutes to skim foam off the top and stick another couple of logs in the fire. Each year he adds a few more taps, and adds another day or two of boiling. "It's fun, the kids love it, and it's nice to get outside after a long winter."

It's important to use a stainless pan; last year Blume used a galvanized one and it ruined a full gallon of syrup—syrup, not sap—giving it an awful metallic taste. I have used a big speckleware enameled canning tub to good effect as well for smaller amounts. Your kitchen can get pretty steamy, and not a little sticky, depending on the quantity you make, but if you have a good vent hood it's very doable. I boiled some this year, for vinegar and candy, among other things, but mostly I helped Blume schlep sap and tended the buckets when he and his family were out of town in exchange for some of that sweet, sweet syrup. Besides that, though, the hauling and pouring and skimming get the heart beating, a welcome feeling for gardeners in winter. And shooting the shit, happy outside on a raw day, sipping hot sap, is its own reward.

By Mike Cioffi, Chris Bradley and Sara B. Franklin