In the Funny Papers: Newspaper Comic Strip Art in Ellenville

In the decades before television, millions of American kids looked forward to Sunday morning. Sunrise that day brought a whole section of the newspaper devoted to colorized episodes of the beloved black-and-white syndicated comic strips they'd been following all week—"the Sunday funnies." By the 1960s, though, the apex of newspaper comics had passed, and most kids were more obsessed with the Saturday morning cartoon series that were overtaking network TV. Nevertheless, there was still a sizeable youth audience who remained fascinated with printed serial comics. One was R. Robert Pollak, who would himself go on to become a comic artist and whose collection of classic comic art is the focus of "A Cavalcade of American Newspaper Comic Strip Art," an exhibition now on display at the Ellenville Public Library and Museum.

"I loved how the strips were cliffhangers—you had to wait until the next episode to find out what was going to happen to the characters when they got into these desperate situations," remembers Pollak, who was born in the Bronx and grew up in Ellenville, where his passion for comics began in the mid '60s. "I loved Dick Tracy, Flash Gordon, Buck Rogers, Tarzan, Prince Valiant. I started clipping them out of the paper and saving them. Then, when I got a little older, I started writing to some of the artists, like Sy Barry, who drew The Phantom, and Dan Barry, who drew Flash Gordon. Most of them were really nice and would write back and sometimes even send a drawing they did. The first really great artist I met was Milton Caniff [Terry and the Pirates, Steve Canyon], who was almost like another dad to me. I was about 16 or 17, and I'd started drawing by then, and he gave me lots of advice." 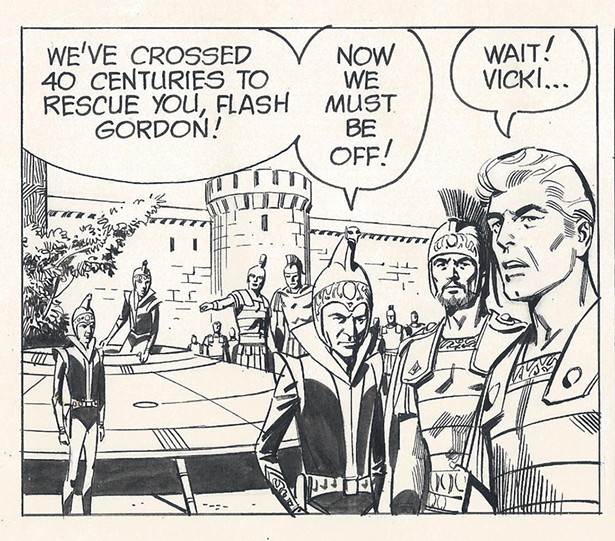 As was the case with many of us who had our noses jammed in comic books as a kid, for the small-town-raised Pollak, the art form offered an escape. "I was always a bit of a loner, and I lived vicariously through the characters," he muses. "I was always artistic, and my parents encouraged me to draw." Pollak, who credits a 1971 cartoon exhibition his father took him to as the inspiration for his current Ellenville show, went on to study at Pratt Institute; work as an art director for the J.C. Penney Corporation; draw for the Soho Weekly News and other publications; and teach fourth and fifth grade for 28 years in the Brooklyn public school system. In the latter vocation, he recruited legendary artists like Fred Laswell (Snuffy Smith), Jim Keefe (Flash Gordon), and Dale Messick (Brenda Starr, Reporter) to speak to his classes.

Besides contributing to several comics anthologies and creating a coloring-book tribute to Bill Woggon's 1940s-era character Katy Keene, Pollak, a National Cartoonists Society and Society of Illustrators inductee, began drawing Ellen's Adventures at The Shadowland in 2012. Chock full of local landmarks, the series (now compiled into two volumes published by Red Stylo Media) follows the exploits of Ellen Allen, a New York actress who comes to Ellenville to work at its historic Shadowland Stages. As with his beloved Golden Age comics, the series' aesthetic recalls the Art Deco glamor of old Hollywood. "I like the nostalgia of it," says Pollak. "It's an homage to what the great people working then were able to do with just pen and ink and a brush."

"A Cavalcade of American Newspaper Comic Strip Art" is on view at the Ellenville Public Library and Museum through October 31. Eplm.org.