Geoffrey Good Fine Jewelry’s Owner and Craftsman on His Career, Craft, and What's Next for His Hudson Operation

When Geoffrey Good begins work on a piece of jewelry, it’s his hands at work, of course. He’s the brain and craft behind various works made for the Metropolitan Museum of Art and the Grammy and Academy Awards, for fashion designers like Alexander Wang, and, of course, for his own atelier on Warren Street in Hudson.

But, there’s a few other sets of hands guiding him: There’s his teacher, a German master jeweler on Madison Avenue who let him cut his teeth on multimillion dollar projects for firms like Sotheby’s, Christie’s, and Cartier. Then there’s his teacher's teacher before him, whose portrait hung in the shop where they worked and whose classical European manner and approach to the craft was passed down to successive jewelers. It's exactly that sublime tradition of passing on a skill through generations that might make you feel a bit sentimental about the craft.


“You could really see there was a tangible and traditional handing down of information,”

Good says. “His teacher taught him, and he, in turn, shared all of that with me. I was just like a

sponge. I absorbed all I could.” Later, as a professor at FIT, Good was able to further pass

that information down to many more beginning jewelers.


That “sponge” mentality—plus a bit of exacting perfectionism—has served Good well as he’s navigated his career.

The story goes he crafted his first pair of “primitive” earrings for a woman (now his wife—so, like, results) as a birthday present, out of what he calls a “primal” need to make something—anything—for a person he cared for, while still being a typical college student not-so-flush with cash. But after he’d made that first piece from glass scraps, his drive to soak up just about all he could about crafting "real jewelry" kicked in.


He took the time to pull data, inspiration, and knowledge from everywhere he could: from an early basement studio in “the middle of nowhere” Virginia, from his time as a student at FIT and as an apprentice, from the catalog of jewelry at The Met, from his time spent in Africa while growing up. He filed it all away and over time it has bled into his decisive approach to the craft. “It may take me a long time to make a decision about what I want," he says. "But once I decide, it always happens.”

"It may take me a long time to make a decision about what I want. But once I decide, it always happens.” tweet this

And, now, Good spends his working hours crafting bespoke pieces (in addition to some selective wholesale work and crafting his own out-of-brain designs) for clients who can offer up their own guiding narratives, influences, and stories to channel into the work.


When one client came to Good knowing she wanted a piece to commemorate her 50th birthday, but didn’t have a clear direction in mind, they got to talking. When she animatedly told him about the recent trip she took with her husband to fulfill her lifelong dream of dog sledding, the story was the hook he needed. He ended up down a rabbit hole from dog sled design to antique dog sleds and finally ending up at antique dog harnesses. It was in those cagey distinct lines that he found his inspiration. After a few pipe cleaner models (borrowing from his young daughter’s craft stash), he found his shape. 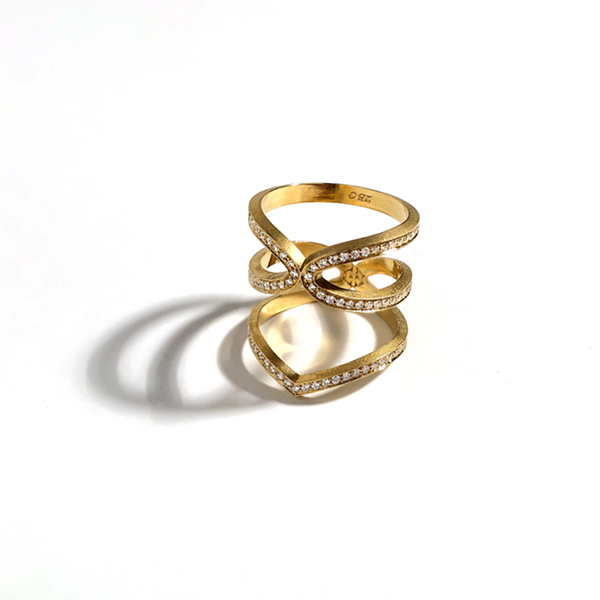 “It's the way of making something that excites me,” Good says. “It's not just me making her a beautiful piece of jewelry. It's something with a story that will probably always remind her of this

other experience that meant so much to her."


Another client ran into what’s probably one of the more traumatic situations that could happen with a prized piece of jewelry: Her ring, which had been in her family for some time, had to be cut off after she had a heart attack. It was totally destroyed.


Good, who prides himself on the capacity to maintain the integrity and spirit of an older piece while integrating it into his new designs, went to work to give it some new life. The main diamond was still intact, but the original ring’s style was a bit more modest. So he worked with the client to design an entirely new ring in the style of the original but arguably better.


Antique diamonds were painstakingly sourced to match the cut of the originals. Inspired by what little engraving remained on the original wedding band, he created an updated version of the ring that was still very clearly related to the deeply sentimental original piece.

“I kept it looking original and also gave her a more substantial piece that she can be proud to wear with a story behind it,” Good says. “It wasn't as extravagant as much of my bespoke work, but it had a lot of thought and a lot of heart. And I really wanted to make it for her—I think that went into the energy of the piece. When she came in and when she first saw the ring, she burst into tears in front of me. She couldn't even talk. To me, that said everything.”


With customers commissioning pieces like these, Good says that the business has only grown. This month marks his seventh year on Warren Street, with tremendous growth taking place over the past two years.

As a business-owner and the creative muscle behind his Hudson-based business, Good says he's in a position to continue that growth— but like everything else he does, it’s going to be intentional. “It's at a point now where I want to take chances with it. I want to experiment. I want to feel the joy and the satisfaction of trying to make this business even better, perhaps even bigger,” Good says. “I like being on the edge a little bit. I like being beyond my comfort zone.”

Good recalls a sign that hung above him while he was apprenticing on Madison Avenue, reminding him each day of his master's lessons on the virtue of “control."


“When you first sit at the bench, you should mentally make a note that you are in control, you're making the jewelry, the jewelry is not making you, basically,” Good says. “I had a little note that was, for six years, in front of me and I would see it every time I sat down to work. And that's always my reminder: Every time I create something with intention, it's all about being focused, having control of what's going on, and then anything is possible.”


For more information about Geoffrey Good and his work, visit his website or his Hudson location.