Improvising with Nature: A Couple Harnesses the Power of Renewables in Woodstock 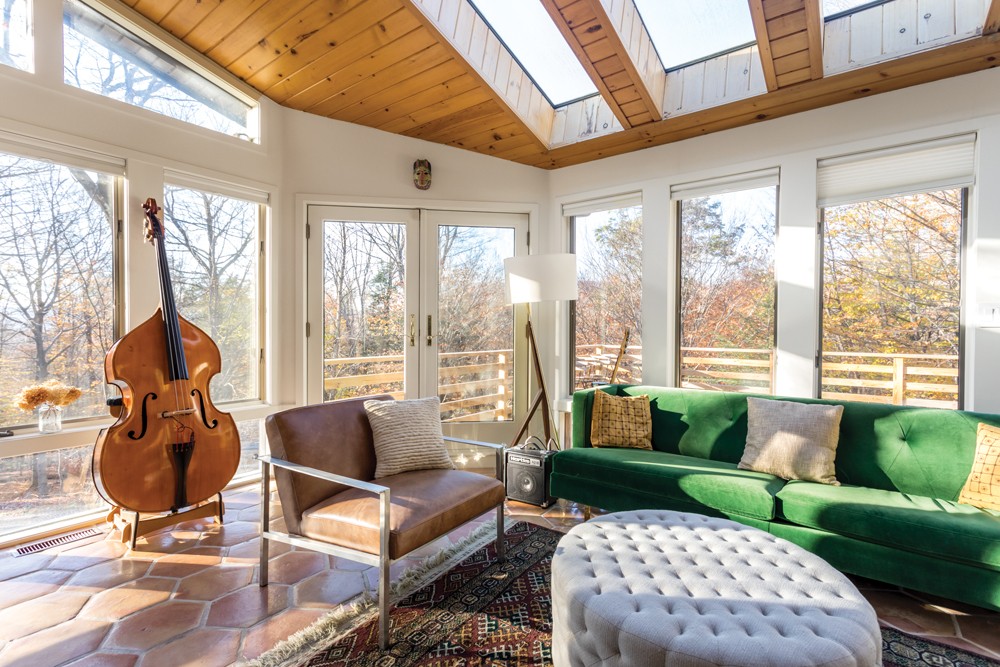 Maybe it was their love of music, maybe it was their love of the outdoors, but it's no surprise that Annie Duflo and Sree Kant found a home in Woodstock. "Someone told us that everyone in Woodstock thinks they're an artist," says Kant, showing me his collection of guitars and one giant upright bass in a sunny corner of the family's music room. In the opposite corner sits Duflo's baby grand piano, where she regularly practices classical pieces, a serious pastime the Paris native has pursued on and off since childhood. At their 2017 wedding, the couple played a duet of "Misty" for attendees, and since then the two are often collaborating on some piece of music, to play with family members over the holidays or just for their own practice. "We always have a piece that we play together," says Duflo. Kant, who first learned to play violin as a kid in his hometown of Bangalore before switching to the bass as an adult, explains, "I just fool around more than play like she does."

Fittingly, their home's music room offers one of the best seats in the house. Surrounded on three sides by walls of windows, the space looks out over the Catskills and offers unparalleled views of the winter sunsets. It's a great place to make music—and, especially, a great place to work out the improvisation that lies at the heart of the jazz piece they are now collaborating on. "With jazz, you actually have to learn a little bit more theory and structure," explains Duflo. "But then, within that structure, you can improvise around points of the piece."

Duflo and Kant have approached the reimagining of their 2,300-square-foot home with the same spirit of improvisation—learning as much as they can about the existing structure and then improvising a bit with the elements at hand. Built in 1983, the two-story wood home "is typical of the Hudson Valley architecture of that era," says Kant.

Nestled into the northern slope of Mount Guardian, the home's natural wood-paneled siding blends into the surrounding forest. Abundant windows offer views in all directions and two wooden decks provide ample space to enjoy the serene setting. In order to best enjoy the surroundings, the couple simplified and opened the interior spaces, allowing the natural setting to permeate the home. Most importantly, Duflo and Kant reworked the home's primary energy source—drawing from the renewable sources at hand to power their home. In the end, Duflo and Kant created their own Earth-friendly improvisation, combining energy sources harnessed from deep in the Earth as well as their unobstructed access to the sun. 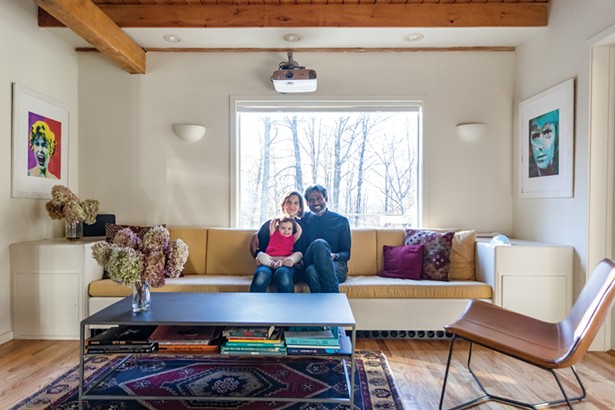 The couple began visiting the Catskills on weekends from the city, for the chance to enjoy time in nature. Kant, who builds biotech companies professionally, is also an avid cyclist. He soon fell in with the local biking scene—making friends and enjoying a growing social circle with like-minded enthusiasts. Duflo, an experienced mountain climber who's climbed all over Europe, enjoyed the chance to relax from her job as executive director of the Innovations for Poverty Action—an international nonprofit focused on making better data-driven decisions for social impact programs. Together, the couple also enjoyed the area's many hiking trails.

They began spending so much time upstate that they decided a weekend house was in order. Their home on Mount Guardian was only the second house in the area their real estate agent showed them—but when they got to the property their dog Scarlett promptly ran off into the woods and got lost. They took it as a good sign and bought the home in 2018.

They loved the location, but knew the house itself would require some updating. The original interior was a hybrid of "Adirondacks-style decorating with a lot of southwestern influence," explains Kant. "We changed all that." Not only did the interior vernacular need a complete redo, the home relied on an aging propane-fueled furnace for heat as well as traditionally sourced electricity from the grid. It was important to both Duflo and Kant that they create a more Earth-friendly abode, and the two began researching both renewable energy sources as well as interior design.

The couple began converting their home to renewables almost immediately with solar energy. An array of 18 solar panels on their roof powers their home completely in summer and partially during winter. A bank of Tesla power walls in their basement allows them to store the solar energy for four days at a time. It was a friend of Duflo's that suggested the couple research geothermal energy to heat their home. After doing some research, they contacted Dandelion Energy, a startup that offers a simple plug-and-play system with which they could easily replace their existing propane furnace for heating.

Related Geothermal Heating & Cooling Gets a Boost in the Hudson Valley: Dandelion is Innovating Geothermal Technology and Accessibility

They decided to go for it, and implemented geothermal heat this October. The process began by drilling two ground loops approximately 400 feet into the ground. Dandelion then swapped out their old propane furnace and replaced it with a heat pump. Using electricity generated by the home's solar, the heat pump runs water through the ground loops, where the earth's constant temperature either heats or cools it to approximately 50 degrees. The water is then pumped back up, run through the home's former propane pipes, and then used to distribute heat through the existing forced air heating ducts, providing the equivalent of about 50,000 BTUs of heating and 60,000 BTU of cooling throughout the year. The system is designed to carry 95 percent or more of the home's heating load—with auxiliary electric, and heat generated by the home's wood stove augmenting the home's temperature on the coldest days of the year. All of it is controllable through Nest thermostats. The pump itself is expected to last 25 years and the ground loops up to 100, providing a constant source of heating and cooling for many years to come. 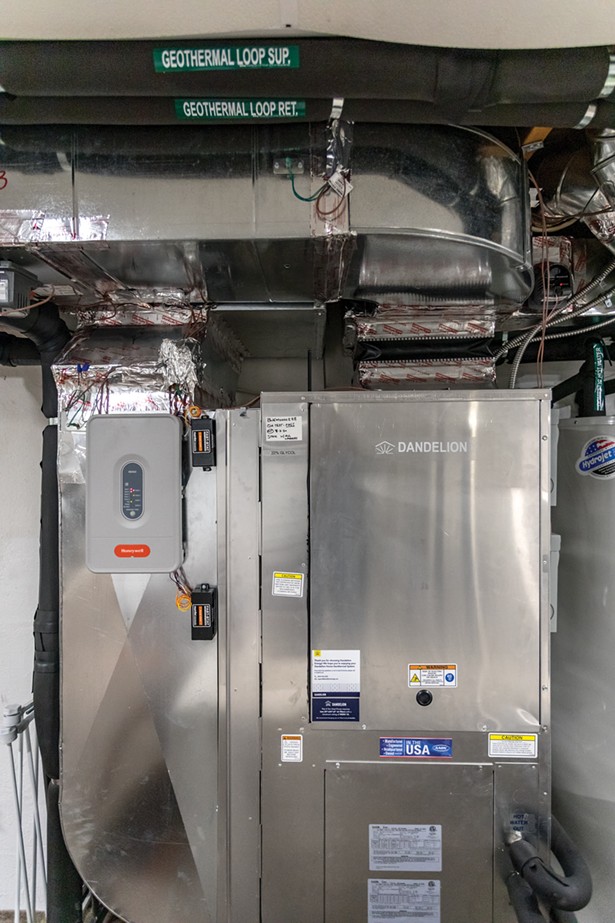 In addition to updating the home with renewable energy sources, the couple "cleaned up" the home's interior spaces to create simplified, flowing rooms both upstairs and down. "We gravitate toward simple and functional," explains Kant of their decorating style. The couple tore down the home's outdated kitchen, along with overhead, hanging box-shaped cabinetry, and removed the wall dividing the space from the dining area.

To provide ample open space for cooking, they added sleek, dark countertops, a large kitchen island, and a monochromatic color scheme. They also updated all the appliances to energy-efficient models and installed a back door. The couple plan to plant a vegetable garden just off the kitchen next spring.


By removing some of the southwestern-inspired, built-in furniture from the living area and simplifying the interior archways, the couple created an open first-floor living, dining, and kitchen space that maximizes the surrounding views. "The aesthetic now is more modern and utilitarian, with splashes of art and color," Kant explains. From the living area, the music room is accessed through glass doors. The couple added sliding barn-style doors on either side of a wide hallway connecting the music room with a guest bedroom—creating a reading nook that can be closed off to provide extra sleeping space for guests when needed. 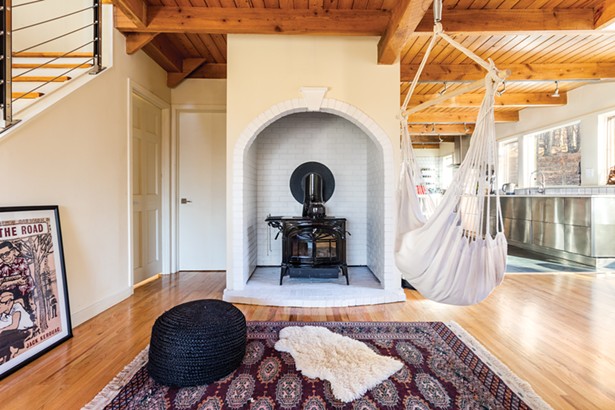 In the lofted second story, the couple took a similar open approach. By replacing a walled stair railing and wooden half walls with open-beamed railings, they lightened up the space significantly. They also removed a built-in couch from the second-floor perimeter walls. Now the space is an open bedroom and office with a sitting area, all under cathedral ceilings. They updated the full upstairs bathroom with modern, monochromatic fixtures and a built-in tub. With the birth of their daughter last year, they found the need to carve out a nursery on the second floor. By adding a retractable partition between a step-up corner of the upstairs loft, they were able to create another versatile bedroom space, allowing for both privacy and family time as needed.

They also added a washer-dryer for convenience.In the future, the couple hopes to update the home's existing front garden and possibly add space for more family members to come visit. Any built addition would also be maximized for additional solar panels to further power their home. While the couple has found new ways to live sustainably, they've also discovered the old-fashioned reasons why so many people love the region. "We've discovered a very vibrant cultural as well as culinary scene across the Hudson Valley that we can tap into," says Kant. "In fact, I think we have a more hectic social life here than we did in the city." 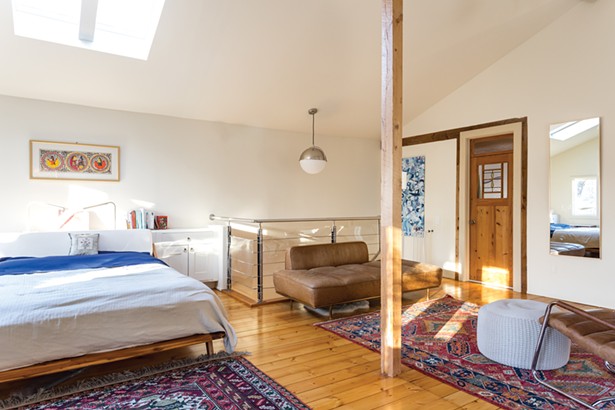