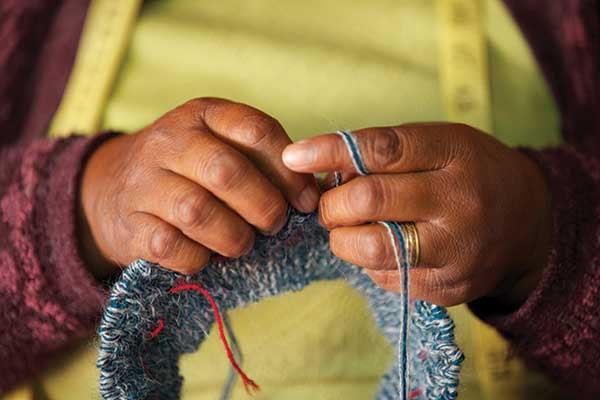 It's safe to say that a great many of us would love to see a better world, and work in our own ways to hasten its arrival—greening our lives, teaching peace, striving to avoid making things worse. We might daydream of having a foundation at our fingertips, being able to aid the struggle in significant ways with the stroke of a pen, but few of us exist at the rarified level of, say, Bill and Melinda Gates. But it's usually necessary to tend what funds we do have with care.

Thanks to the burgeoning field of impact investing, it's becoming more and more possible for ordinary folks to combine prudent money management with positive social action—to do good while doing well. Beyond socially responsible investing—using mutual funds that promise that holdings will not include tobacco or armaments or other unhelpful doings—the impact investment possibilities allow you not just to avoid the negatives but to speed the growth of the greater good. "People should focus on what is important to them as a starting point," says Beth Jones, president of Third Eye Associates, a life and wealth planning firm. "Think about your passion, and from that place, decide what you want to pursue.

"Impact investing—putting your money where you want to make a difference—can involve microfinance, or things like wealthy people putting money into areas of the world that were oppressed under Communist governments, emerging markets that lack infrastructure and can offer good opportunities for helping society while making money," says Jones. "Microfinance can be very high risk but very impactful; other ways can be tough to get in on unless you're an investment company or very wealthy. For most people, investing in mutual funds that do impact investing can be the best way to go."

Personal and Transparent
The messy implosion of the economy five years back helped raise the profile of impact investing, as people disillusioned with Wall Street shenanigans sought alternative havens for what funds they had left. "Big banks and traditional investment firms tend to be complex, opaque, anonymous and based in the short term," says Don Shaffer, president and CEO of RSF Social Finance, a public benefit corporation that's been quietly plugging away at "transforming the way the world works with money" since 1984. "We strive to be the opposite—direct, transparent, personal, and based on a long-term view. If you invest through Bank of America, for example, you have no idea where your money goes—it could be in your community, it could be going to some firm that's clear-cutting rainforests," says Shaffer.

"And without a doubt, the concept is gaining traction. The amount of money in our main loan fund has been growing at 40 percent a year over the last three years, and we're one of many."

Individuals can get a piece of the RSF action by investing $1,000 in the company's Social Investment Fund, which Shaffer characterizes as "very low risk and very competitive. We have a 100 percent repayment rate to our investors, the interest rate is comparable to a bank CD, and we've loaned out over $300 million to various social enterprises. The list of 84 borrowers is right on our website—you can check on what they're doing and how well they're doing it."

Where Would Rudolf Steiner Bank?
Grounded in the economic principles outlined by Rudolf Steiner, RSF spent the latter years of the 20th-century holding mortgages for Waldorf schools. Now, they're riding a rising tide of social entrepreneurial energy. "There's beginning to be a lot more available and a lot more demand," says Jones. "Twenty-first-century people want better due diligence, they want to know what corporations are really up to—how do they treat their employees? Are they impacting the world as good corporate citizens with integrity, or just out to make a quick buck and move on? With due diligence you can uncover the information, but a lot of firms do marketing to make themselves look green, get in on the fad. You can't just take it at face value; you need to look under the hood and really drill down."

Unlike the slick marketing campaigns of the profiteers, in which soft-focus older couples glide blissfully into rose-tinged retirements and babies spit up onto keyboards whilst day-trading, the world of benefit corporations and impact investing has a pleasantly geeky yet accessible feel. The stuff under the hood is, at the better operations, clearly visible, the due diligence laid out for all to see.

"We have no marketing budget," Shaffer explains. "We don't do billboards or sponsor golf tournaments. We do education. We sponsor organizations like B Lab and the Social Venture Network, creating the conditions for social investing to thrive and for people to learn about it. I talked to a guy from Fortune magazine recently and he said, 'You guys are 29 years into this and you've only got 1,300 investment partners? What happened?' What happens is, we work with them one at a time. Some of our investors are high net worth, but they're not big institutions, they're individual human beings. And we just don't approach things the way the big banks do."

RSF's Local Origins
Originally located on the Hawthorne Valley Institute property in Columbia County, RSF is still involved with Hawthorne—and, as of last year, with Farm to Table Co-Packers in Kingston. "They aggregate and process local food and get it to restaurants in New York City, which is very much aligned with our mission in several ways," says Shaffer. "The Hudson River Valley is like the Bay Area in being a place where the local food movement is gaining some serious traction." Social finance strives to attack issues on many fronts at once; RSF is also sponsoring the National Young Farmers Coalition in a land-access study seeking ways to help young farmers gain the use of affordable land.

"Balancing the two key dynamics involved—getting the money to put out and finding the right places to put it—isn't easy, and we work hard taking care of both sides," says Shaffer. "But somehow the amount of money being invested seems to correlate well to the needs, and we are finding some of the best social enterprises out there. Right now we've got about 15 percent more investments than loans; usually, it's more like a one-to-one ratio. It stays pretty even."

Have a Clue, and a Method
"Nobody really wants to feed the beast," says Jones, "and the Wall Street firms don't get it. Impact investing through mutual funds is in its infancy right now, but the possibilities are exciting. There are plenty of opportunities out there for people to target their money to specific good works, which is fine if you can afford it—but if you invest $5,000 into one specific endeavor, you can't count on getting it back. Mutual funds manage risk. Whatever you do with your money, just do pay attention. You don't have to be a rocket scientist—just have a clue and a method."

Might impact investing, with its competitive return rates and scholarly approach to best practices, offer the possibility of harnessing the engine of capitalism and turning it from a blight into a blessing? One can hope. Just surfing through the vast variety of projects—in agriculture, education, ecological stewardship and a host of other realms—and observing the open-source, collaborative approach on this frontier gives a hopeful feeling.

For Shaffer, it's a calling. "I've been obsessed with money and finance since I was 14, and this is my dream job," he says. "I love working with money as a transformative idea."

Going (Back) to the Movies: Local Cinemas Grapple with Reopening Amid a Second Wave
Top Stories