Hurry Up and Wait 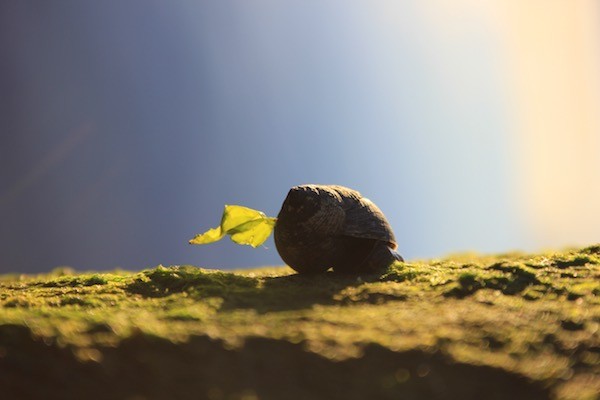 These next few days look like they could have a "push/pull" or "hurry up and wait" feel to them. With the Sun, retrograde Mercury, and Mars all changing signs within three days, you may find that it pays to move slowly, consciously, and with as much awareness of your decision-making processes (and impulses) as possible.

The Sun was the first of the three to change signs, which it did yesterday (Wednesday) when it left Aries and entered Taurus. This puts us in the heart of the season: spring here in the Northern Hemisphere, with the days noticeably longer, and warmer finally—and tree buds, flowers and allergies popping up all over.

Yet one of the main benefits of having the Sun in earthy, sensual, don't-even-think-about-rushing-me Taurus is that it may offer some needed grounding for the movements of Mercury and Mars. This is not about getting stubborn. It's about being able to feel both of your feet (or all four of your hooves) on the solid earth, and letting that sensory contact help you to stay present, focused, and in your body.

This physical grounding can feel especially helpful when Mercury is in a particularly "quick" sign, or when it's in retrograde motion. Both are key factors as we head into the weekend.

Mercury is currently in Taurus, but it's about to slip backwards into late Aries. Before it does so, it will make a conjunction to the Sun in the first degree of Taurus (exact at 1:54 am EDTApril 20—today).

This is the so-called "inferior" or "interior" conjunction of the Sun and Mercury, and it marks the midpoint of the current Mercury retrograde. Traditionally many astrologers have suggested that if one absolutely must conduct major business during Mercury retrograde (such as signing a contract or making a major purchase), the day that the Sun and Mercury conjoin is the day to do it. However, there seems to be an indication that the window for this might be quite narrow today. Or, perhaps, that there is little room for error.

Hypothetical point Transpluto is making a supportive aspect from Virgo; it would seem that taking advantage of this support means being super-careful about triple checking all the details, and being very mindful of your timing. If that's not feasible, see if you can put off the business in question until after the first few days of May. (Mercury stations direct May 3, but things could still be choppy for several days after that—which just means stay focused on what you're doing.)

Then, within 12 hours of the Sun-Mercury conjunction, Mercury retrogrades back into late Aries (at 1:37 pm EDT today). With this shift, the squirrelly manifestations of Mercury retrograde could take on a more impetuous, impulsive feel. Or, rather, your reactions to things not going as planned could get more impulsive or irritable.

The more aware you can stay of the mantras, "Go with the flow," "It's not all about me," and "Take a breath and count to ten first," the easier this shift may go for you. Mercury retrograde is not the gods and goddesses trying to make you miserable. It is, however, an excellent time to notice mental habits you've never noticed before and get a better handle on them. But doing so takes some patience—and getting one's ego out of the way.

Remembering not to over-identify with your ego could be a little tougher with the Sun so close to Mercury. But the patience part could get a hand from the Sun hanging out in Taurus while Mercury makes its move. Yes, bulls can be known for really losing their temper, but it tends to build slowly. It's a good reminder to hang out in the field of daisies rather than in the china shop for the next week or so.

Really feeling into the earthy influence of Taurus becomes especially helpful once Mars makes its own move: it enters Gemini at 6:32 am EDT tomorrow (Friday). Mars in Gemini tends to be alert, energetic and witty—which can translate into too much energy directed toward the tongue, according to one of my astrology books (and communication might already be tricky right now). This Mars placement is also a reminder to conserve energy so you can direct it more wisely, and a reminder to follow through on what you start.

If you start feeling restless, figure out a way to channel the energy productively. This might mean shifting tasks or taking an exercise/stretch break.

Interestingly, Mars ingressing Gemini also means that before we even reach the weekend, Mercury will be in a sign Mars rules, and Mars will be in a sign Mercury rules. This situation is called "mutual reception," and it indicates that the planets involved can seem to "switch places" or act like each other.

Given the planets and signs involved, this looks like a lot of busy and combustive mental and physical (including sexual) energy. Yet Mercury is retrograde.

This is where the "push/pull" or "hurry up and wait" ideas come in that I first mentioned. The mind and the drive want to get going immediately and at high speeds, but doing so could be problematic if you don't stay grounded in your body, stay fully aware of your surroundings and senses, and step back from letting your ego run the show.

True, the Taurus Sun has its shadow side (stubbornness, possessiveness, being materialistic). But if you can lean on its kinder, gentler qualities for the next couple weeks—and especially the next couple days as you adjust to the shifts in energy—you might save yourself some frustration in the long run. Take time cooking and eating a good meal. Take a nap in a field or your flower garden. Get a massage. Refuse to be rushed simply for the sake of keeping up with your Facebook or Twitter feed (though there are times when picking up the pace in an activity will be necessary).

Most importantly, remember that when something does go wrong, and your attention gets turned back onto yourself and your hand in the mishap, it's an opportunity to learn from it. Easier said than done, I know. But you'll find yourself standing on firmer ground for those next forward steps that you're so eager to take.

Art of Business: Shine On

Feeling Your Way Into a Softer Revolution