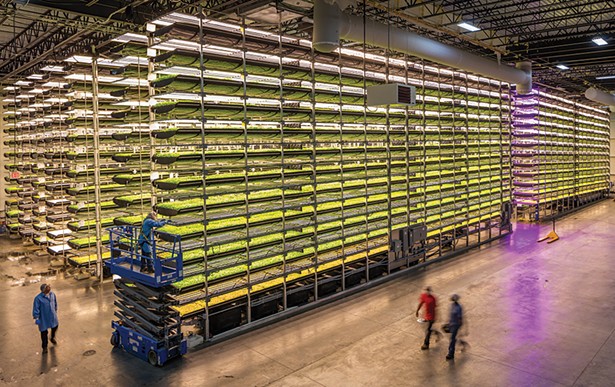 According to the New York State Energy Research and Development Authority (NYSERDA)'s 2018 New York Clean Energy Industry Report, the state rates as the third-highest in the country for energy efficiency and solar jobs, including a 6.1% increase in clean energy jobs in 2017—more than three percent higher than the figure, nationwide. More than 13 per every thousand jobs in the Mid-Hudson Valley (and Western New York) were in clean energy in 2017.

Newburgh-based economist Michael Muyot has taken notice of the region's growing interest in sustainability and sees green technology as a viable vehicle for economic growth in Newburgh and its outlying regions. "In terms of driving the economy, you're looking at manufacturing some of these technologies here; these services, these products," says Muyot.

To that end, Muyot and writer-director Robert Fontaine joined forces for the ENE International Film+Music+Green Tech Festival at the Crossroads of the Future. The event includes a Green Tech Conference, June 17-21 at the Ritz Theater in Newburgh and the East Northeast International Film Festival, a celebration of independent film, music, and the green technology industry that will be held in Newburgh, August 23-September 2, and was created by Fontaine.

The ENE Green Tech Conference's presentations and panel talks on sustainable development (including food and agriculture), energy efficiency, investing, job training and career opportunities will be led by experts in sustainability and green technology, including business professionals, government officials, professors and investors to help energize ties between communities, entrepreneurs, government representatives, vendors, visionaries, and outside sources.

Initiatives to combat climate change and build related jobs, like the Sunrise Movement, are helping to highlight issues around green technology and generate positive action, says Muyot. So is the need for careers in the installation, infrastructure, and maintenance of green technologies. "This it's not just the policy, but it's also the good jobs, so everyone who wants a job can have one in this industry," saysMuyot. "So there's a policy part of it, but there's also an economic part."

The region, Everett says, has plenty of solid, home-grown businesses in the energy sector that are stable and maturing. "For every Tesla-like factory, there are hundreds of little battery-making companies and sales and marketing firms," she says.

While climate change contributes to the planet's growing instability, says Everett, it also is a catalyst for action. "The 'positive' side of climate change is the awakening renaissance of technology and development," Everett says, including more human-, social- and innovative-driven solutions.

Ron Kamen is a principal of EarthKind Energy, a clean energy consulting company based in Rhinebeck, and Sustainable Westchester Program Director-Clean Transportation and HeatSmart Westchester. Often, he says, talk centers on the materials and manufacturing aspects of green technology, but there also are positons in administration, equipment maintenance, sales and marketing. "There are a lot of opportunities," Kamen says. "Different communities have different areas of expertise and abilities to tap. The Hudson Valley has a strong interest and growing desire and political will. It's moving the economy."


Moreover, sustainability initiatives benefit ecosystems, communities, and residents. For instance, solar power is growing exponentially thanks to affordable options from changing policies and programs, like community solar power programs that allow homes within a designated area of the Hudson Valley and elsewhere to benefit from solar arrays installed at a community location. Because the energy produced from the solar panels is directed into the power grid that serves the community's homes, the member residences access the solar power seamlessly, helping reduce electric costs. Such programs help maximize access to green energy, with solar energy rising 1,000% between December 2011 and December 2017, including an increase in the Mid-Hudson region from 1,353 solar projects in 2011 to 17,511 in 2017.

Green tech is providing alternatives to conventional heating systems, such as geothermal systems that use underground heat for efficient heating and cooling, along with air-source heat pumps that efficiently move warm air inside and out to heat and cool a home. Thermal power and transportation are other important issues, says Kamen, with the Environmental Protection Agency reporting about 28% of greenhouse emissions stemmed from the transportation sector in 2016.

Fortunately, Everett says, energy-specific classes and training programs offered through the area's state colleges have risen in the last decade, in particular, at SUNY Ulster, including energy auditing, solar panel installation, geothermal drilling and more. "One of the hard problems around workforce development—we're doing decently—is training to a career path," she says.

To that end, the ENE Green Tech conference will include end-of-day panel talks on careers in the industry, including apprenticeships and academic studies.

CCAs allow participating local governments to buy energy supply service and distributed energy resources (local renewable energy projects) for eligible customers in a designated community. Energy used by a jurisdiction's participating residences and small business is purchased jointly, providing more options for clean energy and reduced energy costs, even while the energy's delivery and associated processes are conducted by the municipality's existing utility. Customers within a CCA in New York are automatically enrolled in the program, but can opt-out of it in favor of their municipality's utility.

New York is one of seven states in the nation that currently offers CCA, with 110,000 customers served through the Westchester Power CCA in 2016. Domanski says the program is about to launch for the City of Poughkeepsie, Beacon, Town of Fishkill, Philipstown, Cold Spring, Marbletown and the Town of Red Hook.

Domanski says there's a strong awareness of sustainability issues in the region, including a need to "change the grid to be what we need to be a stream for renewable energy."The idea goes beyond educating the public about the issues, but also to engaging people through opportunities in the green tech field and related initiatives.

Muyot says grassroots organizations are becoming less isolated and siloed, as through The Good Work Institute, a Hudson Valley nonprofit working to connect those involved in the region's regeneration. As well, business and corporations are becoming more receptive to ideas centered on sustainability, including technologies and practices that heighten them.

"There's this potential for this industry to really grow in this area," says Muyot.