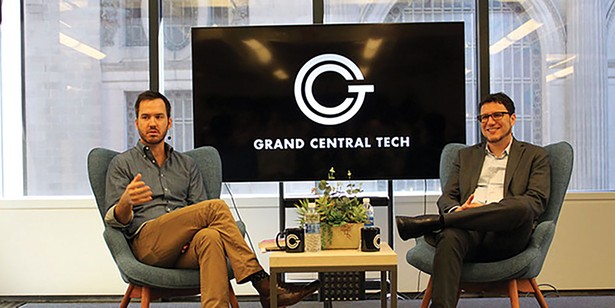 The Hudson Valley's tech industry has gained huge momentum in recent years—and it's growing even quicker with a giant newcomer this summer.

If you stopped by Dietz Stadium on a chilly May evening and watched a couple hundred people cheer on a fourth-division soccer club created by a tech pioneer, you might nod your head and say to yourself, "Yup, this is the Hudson Valley."

There would be no Stockade FC, the fourth-division professional club launched in 2016 by Foursquare co-founder Dennis Crowley, if there wasn't a Hudson Valley Tech Meetup. And there wouldn't be a Hudson Valley Tech Meetup, a network of tech workers and entrepreneurs, if it wasn't for the thousands of creative thinkers and doers across the region attempting to showcase their skills while engrossing themselves in the greater community.

Whether they've been creating apps and platforms for years in Beacon, Hudson, Kingston, or Poughkeepsie, or they just arrived from New York City or elsewhere, tech entrepreneurs are finding a diverse, beautiful backdrop to create and engage. And now, with the arrival of New York City accelerator giant Grand Central Tech this summer, the Hudson Valley tech community is beginning to earn deeper credibility as a formidable and innovative unit ecosystem.

A Different Idea of Value

Grand Central Tech started as a summer accelerator program for tech startups inside a New York City high school. In 2014 it moved to Facebook's former headquarters in Midtown Manhattan, and with sponsors including Microsoft, Google, JPMorgan Chase, and IBM, plus financing by Millstein & Co., Grand Central Tech immediately staked a claim as a high-level accelerator program in the tech sector.


The program is alluring for tech entrepreneurs: Grand Central Tech doesn't require cash or equity from its potential members. If accepted (and GCT has a 2 percent acceptance rate), members receive a free year of rent inside its Midtown headquarters, which will soon encompass six levels of a high-rise and a total of more than 250,000 square feet of space. After one year, members can opt to stay at Grand Central Tech but will then pay for space. But by then there's a real chance a startup has taken off, moving into more funding rounds. Thus, Grand Central Tech offers an inexpensive opportunity to thrive in a competitive space, especially if that company is thinking beyond financial success.

"We think of all the companies with the same eye toward are they building to create value for themselves and their investors? Certainly, but also for the broader community at large?" says Sage Ramadge, director of Social Impact at GCT. "And do they want to invest in the community that we built, from a talent and experience perspective?"

In the fall of 2017, Ramadge and Grand Central Tech co-founder Matt Harrigan began talking about expanding the organization with a summer outpost outside of the five boroughs. Primarily they wanted GCT members to experience opportunities available to them in decidedly rural areas, both for a better quality of life and to meet different communities of people. That brought them straight to the Hudson Valley, which Ramadge called the "ideal" setting for the satellite space thanks to its natural beauty, creative and entrepreneurial population, and progressive social ecosystem. They considered Beacon and Hudson but scouted locations in Poughkeepsie and Kingston, deciding ultimately on the latter by renting space at the 8,000-square-foot Senate Garage, which is also home to Rhino Records and Dragon360, a digital marketing company with past clients that include Sony and Pantone. The satellite will open in July and will first be occupied by GCT members, though there's a possibility non-members could also join, says Ramadge.

Grand Central Tech found in the Hudson Valley an established tech community that continues to grow and thrive on a mission reflective of the "triple bottom line" philosophy in accounting. Every entrepreneur seeks financial success, but along with that is achievement socially and environmentally.

"It’s about doing beautiful work that supports people and has community impact,” says Kale Kaposhilin, chief community officer/co-founder at creative digital studio Moonfarmer and co-founder of Hudson Valley Tech Meetup, in explaining the triple bottom line philosophy. “And one after another, things have emerged because of this—that’s the startup community that I want to be part of.”

As a sound engineer for improvisational jazz and other musicians, Kaposhilin ran a studio with friends, working with video and website development to expand the potential of the music. He first came to Kingston around 2000 and had with his friends "a vision for a live-work community where art is life," says Kaposhilin, which led to the 2014 founding of Hudson Valley Tech Meetup, a way to find and unite creative tech workers throughout the region.