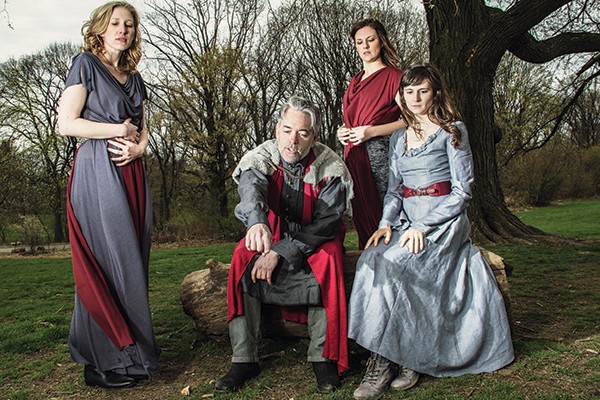 King Lear and his three daughters ceremoniously march through the theater's aisles onto the dirt stage of the Hudson Valley Shakespeare Festival at Boscobel in Garrison. The aging king commands his daughters to declare their love for him in order to determine the size of their inheritance of his kingdom. Goneril and Regan fabricate elaborate proclamations of adoration to get their share, while the youngest, Cordelia, states her love plainly, truly. "What can you say to draw a third more opulent than your sisters?" asks Lear. "Nothing," answers Cordelia. Lear's response, "Nothing will come of nothing," is one of the great ironies of Shakespeare's tragic masterpiece. From the outset, "King Lear" makes us question what it means to have all or nothing.

Shakespeare's "King Lear" is a radical adaptation of a story that had existed for centuries before his 1608 publication. Taking a play that was originally written with a happy ending, Shakespeare, the world's most successful plagiarist, created a wrenching, unforgiving portrayal of human frailty. His nihilistic vision presents gods who kill men for sport; men who kill men for money; and family members who betray each other for power. At the hands of his two self-serving daughters, Lear unravels into a state of madness and despair—a state wherein he realizes that the love of his third daughter, whom he punished and disowned, was true. Throughout Lear's tragic journey, the audience is presented with multiple paradoxes (as well as plotlines): Characters find reason in madness, humanity in untamed nature. At the thematic core of Shakespeare's "King Lear" is a story of getting to the essence of things by removing superfluous extremities.

It is in this spirit that the Hudson Valley Shakespeare Festival ambitiously sets out to stage the epic play this summer. "The thing that we really wanted to do was figure out how to make the play accessible to our audience without compromising the integrity of the material," says Terrence O'Brien, the play's director and founding artistic director of the HVSF, who started the company in 1987. The HVSF presents the complex web of "King Lear" directly, with great loyalty to the script. Relying on the power of the language for effect rather than complex sets and costumes is an approach that has come to define the HVSF's style. "The script, actors, and audience—that's what you need for a theatrical experience," says O'Brien. Even the play's climactic storm is staged simply, with flashing lights used to signify lightning and subtle thunder sound effects. "The storm is written into the script," says O'Brien. "If you do it with enough energy, you'll feel its rage."

The storm wouldn't have been elaborately staged in Shakespeare's time, either, as the Globe Theatre had no ceilings for hanging set pieces. The HVSF's outdoor theater—a large, airy, yet intimate tent on Boscobel's lawn—has ceilings, but no walls. "The people in the first row have their seats on the stage—on the same ground that the actors are on, and the same ground that goes out into the horizon," says O'Brien. HVSF actors regularly enter and exit through the backdrop that opens out to the Hudson Highlands at the edge of Boscobel's green lawn in the distance, turning the dramatic Hudson Valley landscape into a set piece all its own.