There are those who've sounded the death knell of the record label with escalating volume in recent years. They mainly blame the Internet and its attendant streaming and file sharing—or, more specifically, a generation that, arguably, views recorded music as little more than free, fleetingly interesting, and ultimately disposable bundles of intangible data. As evidence, these pessimists point to the decimation of the traditional commercial model for releasing and marketing music that's been in place since Edison pioneered the wax cylinder over a century ago. The fat lady has sung, they say, and labels are done.

Not so fast, doomsayers. Yes, it's undeniable that the Internet Age has delivered a considerable blow to the established infrastructure of the industry—and it's the majors who've been crying the loudest about it, as they make desperate moves like repackaging their back catalogs into pricey box sets aimed at last-gasping baby boomers and putting in place the controversial "360" deals that take a piece of what artists make from live performances, merchandise, and other sources of income not directly related to record sales. And while theory might posit that the Internet's direct-to-fan marketing mechanisms mean that artists can bypass having to be on a "real" label in order to sell their music, the truth is that many who operate below a certain profile are finding out they have neither the time nor the business acumen needed to run a record label effectively. Thus, after a dip of about a decade, the number of indie labels is on the rise, a phenomenon fueled in part by the renewed interest in vinyl and better systems for managing download sales. And two of today's most vital and respected indies are based in the Hudson Valley: Team Love Records and Fat Cat Records. In the face of file sharing and record store closures, both have been able to hold their own, delivering steady streams of high-quality product by some of the cutting edge's most critically fêted artists. Which in today's downsized reality translates to outright success.

"In the time Team Love's been around, the record industry's only known bad times," muses label head Nate Krenkel, indicating that success is a relative term. "Right now, the business is basically a three-tiered situation. At the top are the majors, who can't really even poach off indie labels anymore because they can't offer artists anything better and still make the money they need to operate; in the middle you've got the big indie labels like Matador and Merge; and below them are all the smaller labels." One could say Team Love and Fat Cat lie just beneath the second echelon; while neither are at the level of recognized indie powerhouses like the two Krenkel cites, both nevertheless have burgeoning catalogs and international followings that regard them as sage, ear-to-the-underground tastemakers.

"What's What I Do" by Last Good Tooth
From the album Not Without Work and Rest.
Update Required To play the media you will need to either update your browser to a recent version or update your Flash plugin.

Krenkel grew up in Utah and worked as an A&R rep at Sony/ATV Publishing in New York for several years before co-founding Team Love in 2003 with singer-songwriter Connor Oberst, whose career he manages. The label's big opening move was a novel one at the time, a "Why fight it?" approach to the file-sharing issue that offered free downloads as a promotional tool to generate interest in its releases. Along with recordings by Oberst's guises as Bright Eyes and Connor Oberst and the Mystic Valley Band, the highly eclectic label encompasses styles ranging from sugary pop to acoustic folk, rock, and rap, and has released, among many others, acclaimed albums by Rilo Kiley singer Jenny Lewis, Tilly and the Wall, Simon Joyner, Super Furry Animals leader Gruff Rhys, and sets by both vocalist Craig Wedren and his venerated band, Shudder to Think. Krenkel ran Team Love out of his Lower East Side apartment until he and his family relocated in 2009 to New Paltz, where he set up operations in the Church Street storefront the label shares with artist management firm Ravenhouse Ltd.

Called the Team Love Ravenhouse Gallery, in addition to housing the offices of both companies the site functions as a retail shop, an art gallery, an occasional performance space, and the physical manifestation of Team Love's colorful, homespun aesthetic. Krenkel was drawn to the Hudson Valley by way of Oberst's sometime tour mates, the locally grown Felice Brothers, who have made two megaselling albums for the imprint, 2008's The Felice Brothers and 2009's Yonder Is the Clock. But that internationally popular folk-country crew isn't the only area act Team Love, which works with artists via one-record-at-a-time contracts, has taken an interest in. In 2012 it released Die Pfalz, a compilation featuring the New Paltz-associated Breakfast in Fur, Bloodletters, Shana Falana, and Cycad, as well as ex-Felice Brother Simone Felice's self-titled debut; more recent signings include a pair of Hudson-based acts, the haunting-voiced folk singer Andrea Tomasi and the alt-Americana band Last Good Tooth. "I found out about Team Love through Willy Mason's second album, Where the Humans Eat [released on the label in 2004]," says Last Good Tooth singer and guitarist Penn Sultan. "I played the hell out of that album, and I was also really into the albums Team Love put out by [Texas singer-songwriter] David Dondero. My band met Nate when we played in New Paltz a year ago. We dropped off a demo at the office and he called us up to say he dug it, and we ended up crashing at his family's place. We've gotten to be good friends." 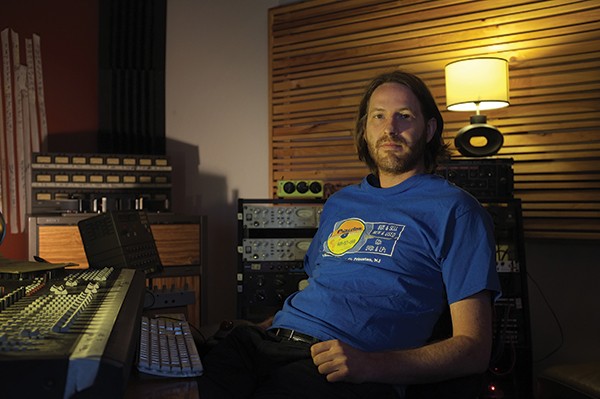