Hudson Valley filmmaker Josh Ruben is undaunted by criticism of his first feature, Scare Me. Instead, he's reflective. “Some folks say it drags a little long,” he says. “It may not be for everyone, that’s okay. I just wanted to make something that was mine, fun, and watchable. Shudder picked it up before Sundance, and it may get a limited theatrical release. So more people have seen it than just my parents, which feels pretty cool. I’m grateful!”

The film, which puts two writers together for an impromptu story slam in a remote cabin, has been called “a delightful and spooky surprise of a movie” (Nerdist) and “a spooky, cozy warm blanket worth cuddling up to by the fire” (Bloody Disgusting). Ruben laughs when reminded that Variety’s writer Amy Nicholson ended her film review with “The film’s real bogeyman is wounded macho pride.” “Most of our glowing reviews,” he says, “have been from women, come to think of it.”

Ruben, who grew up in the Catskills, has been filming in the area since his parents gave him a Sony Handycam at the start of middle school. Critical reception for Scare Me aside, Ruben rolled right into production for his second feature-length film, Werewolves Within, which is also shooting in the Hudson Valley, using local hires and sites as much as possible.
"I plan to film my third feature here as well," he says. "What can I say—it's a magic place that photographs pretty well."
Werewolves is based on a virtual reality game in which citizens in a medieval town have to figure out which one of them is the werewolf. Since launch on February 3, the crew has been shooting till 2am in 15-degree weather, sometimes in the deep dark woods. “When we filmed at Cooper Lake, there were a couple of women out for a walk who seemed irked and asked if we could be quiet," Ruben says. "‘We live here,’ they said. I said, ‘Yeah, I went to prom with X from that house right over there.’ But most everyone has been great. We shot in town, at the Golden Notebook — they were so generous! They speak the language. And nothing too crazy or contentious happened, thank God.”

In March, after filming for his movie wraps, Ruben will head back to LA. “I resisted moving to California for years,” he says. “I held on to New York City until I couldn’t get any more sardined on the train. But Echo Park has the DNA of upstate life; we have racoon and skunk and crazy neighbors, and I can walk up the hill and be in trees, do my daily reset hike in Elysian Park.” He plans to travel with his girlfriend and “maybe direct a couple of DiGiorno commercials.”

In the meantime, Hudson Valley Film Commission director Laurent Rejto loves having Ruben in town; it’s a longstanding bond. “I met Josh about 14 years ago when he was producing a short film with his friend Vincent Peone at his mom's house in Woodstock. I knew his mom, because she was the high school principal at Onteora where my oldest son was going,” says Rejto.

Ruben says that Rejto’s work in founding the festival and the film commission paved the way for him to step into what he was born to do. “I wasn’t the popular kid in high school. I marched to the beat of my own drum,” he says. “I met my own band of misfits, from all over, at the Woodstock Youth Theatre (now Stages In The Arts). Finding my footing just as the Hudson Valley is flooding with the energy—I’ve been dreaming of the opportunity to have this going on my whole life.”

Ruben was not at all surprised to learn that the Hudson Valley film industry generated $50 million in 2019. “It’s all here: city, river, mountains, mojo, brilliance,” he says. “ And it’s so nice to be able to lean in, work with locals who are making a career of gripping and gaffing. You live up here, you do all these things with HBO and Netflix, and here you are working with me? Cool! The more we can hire locally, the better all around.”

Since Werewolves Within began filming in early February, Ruben’s been staying at his family home in Shady. “I’m a family person,” he says. “Mom and dad hosted welcome dinners for the crew.”

"Josh has a wonderful knack for keeping it local while growing the circle of friends to include people from other parts of the country," Rejto says. "The common element is kindness; his sets are always friendly with a great vibe. Scare Me was selected to premiere at Sundance at about the same time that I got on a conference call with producers from Ubisoft regarding Werewolves Within."

“You dream, write, develop, pitch, fail, dream, write, repeat,” says Ruben. “I’d say I had to put in seven years of just-okay writing before I got to three years of coherent work. I had to learn what it takes to get off the ground, to incorporate marketability, audience passion, what makes a film watchable. You make personal connections and bounce ideas around with comedians, directors. Right now I have two film scripts and two TV projects out there, and it’s all about what hits first. We’ll see.” 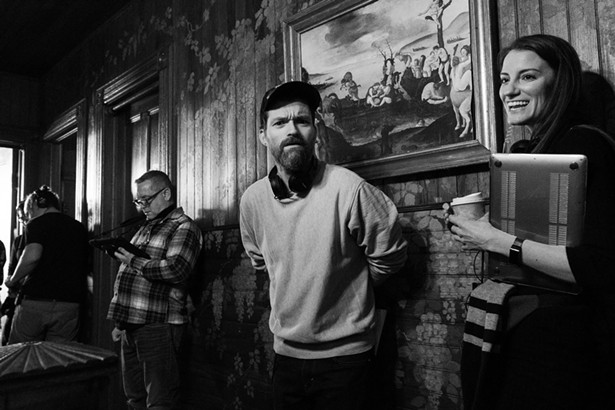 One thing he knows: where to find the ingredients when it’s time to cook. “This might be a little on the nose, but the most integral piece to this movie (the brilliant Aya Cash, Chris Redd, and Rebecca Drysdale aside), was our location,” Ruben told Filmmaker magazine last month. “Though it wasn’t always the most pleasant to shoot in, this log cabin is the fifth cast member.” He’d love to set up some local screenings when “Werewolves Within” is ready.

“We look forward to hosting many more Josh Ruben productions in the region, and we're gratified that he thinks it's a magic place," says Rejto. "Fourteen-time Academy Award nominated composer, Elmer Bernstein said it best in 2002. ‘For over a hundred years, Woodstock has been a place of dreams and magic. It was a place of dreams for visual art, for crafts, for music, for popular music, for theater, for political philosophy, for alternative lifestyles and it is entirely fitting that Woodstock should become a place of dreams and magic for films at this time.’'"