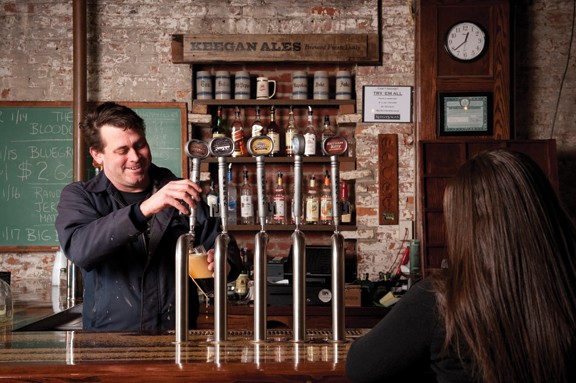 Beer is as old as civilization, and has a long history in New York, too. Matthew Vassar, founder of Vassar College, was a brewer, and by the middle of the 19th century, New York grew 85 percent of the hops in America. Over time, blight and mildew became big problems and production moved west to drier states; the Pacific Northwest now grows most domestic hops. Hops produced in New York today are grown by small farmers and home brewers, which may be fitting; there’s a real craft-beer renaissance brewing in the Hudson Valley, and everyone responsible turned pro after learning the craft at home. Instead of the impersonal and oft-bewildering wall of options—many industrially made, or from far away—that confronts us in the supermarket aisle, the local brewery offers comfort, quality, and community. And beer.

At the end of a short alley off Main Street in Chatham lies the Old Chatham Brewery, co-owned by Tom Crowell and Jake Cunningham since 2006. This is the punk rock end of the microbrewing spectrum; in a 20-by-30-foot garage crammed with fermenters, kegs, and hoses, brewer Matt Perry produces 500 barrels per year of five “flavors” of beer from their 3 1⁄2-barrel system (a barrel is 31 1⁄2 gallons). Loyal customers line up in the alley every Saturday to chat, taste the offerings, and fill growlers. A growler is a half-gallon jug, which works out to eight ounces shy of a six pack; they’re best consumed fairly soon after opening, since the carbonation will escape in a partly empty bottle. Because of that, Crowell and Cunningham plan to introduce 22-ounce labeled “bomber bottles”—at two glasses, a more manageable size than a growler for weeknights or lightweights.

Their ales range from a Belgian-inflected blond, lightly spiced with orange and coriander, through a well-balanced, satisfying amber to a porter with a big, dark flavor and a light body. An IPA (India Pale Ale, named for the British beer developed for long ocean voyages to the colonies; extra hops acted as a preservative) makes a regular appearance, as do seasonal brews. Currently on tap is a very maple-flavored amber ale that’s best suited for drinking with pancakes on a Sunday morning. In addition to selling from the brewery, Chatham is carried by bars and restaurants throughout the area and in New York City. Crowell also sees growler-filling stands at farmers’ markets as a possibility in the near future.

On the macro end of the micro scene sits Kingston’s Keegan Ales. The biggest producer in the valley, at 2,500 barrels per year, Keegan is also the only brewery to bottle its product. For this reason, 99 percent of what they make is their three well-loved brands, which neatly trisect the spectrum into yellow, red, and black. Old Capital, their golden ale, is a good choice for those who fear opacity in their beverages but who want a far more yeasty complexity than mass-market brands. Hurricane Kitty, named for owner Tom Keegan’s speed-demon grandmother, is an über-IPA: a rich, tangy, hopped-up reminder that hops are close relatives of marijuana. Mother’s Milk, a stout that Keegan describes as an “homage to Guinness,” is a bittersweet espresso smoothie of a beer that flirts with the edge of burnt and has a luscious creamy texture from the lactose used in the brew (hence the name).

Keegan also makes a tiny run of two specialty beers, each a turbocharged version of his darker offerings: Super Kitty, the IPA re-fermented with local honey and aged in bourbon barrels, and Joe Mama’s Milk, the Stout re-fermented with brown sugar and fortified further with a shot of coffee from Monkey Joe Roasting Co. just down the road, making it another excellent breakfast beer. The extra steps boost the alcohol and add more layers of flavor, but Keegan’s style is so assertive to begin with that the normal versions have character to spare, offering sustained pleasure over multiple glasses. Keegan’s beers won top honors at the TAP festival last year for Best Craft Brewery in both the Hudson Valley and New York State, and he has plans to expand over the next few years by either enlarging his facility or outsourcing some of the production with an eye toward increasing production by about 1,500 barrels a year. Despite the growth, Keegan estimates that he’s on a first-name basis with about 80 percent of his customers.

Open since 1998, the Gilded Otter in New Paltz is among the oldest breweries in the area. Darren Currier has been the brewer there for almost the entire time. A home brewer in college, he went on to study brewing at the prestigious Siebel Institute in Chicago. He produces about 900 barrels a year, and offers eight or so brews at any given time; interested visitors can avail themselves of the “beer garden” tasting that includes a three-ounce glass of everything on tap. Currier has crafted a fine array of choices to accommodate any palate. One highlight is the Three Pines IPA, which beautifully balances sweet, sour, and bitter, making for a superb example of the style; English hops impart more earthy and floral notes than some popular domestic varieties, so the result is less cloyingly fruity than the norm. Currier says that nearly 50 percent of their business is in growlers, sold to regular patrons and some tourists, and that bottling lies ahead.

The Cave Mountain Brewery in Windham has been open for just over a year, and is off to a successful start: Last year it won Best Microbrewery award in the Hunter Mountain Microbrew Festival. Owners Tim and Amber Adams (no relation to Sam) have built a prosperous brewpub around sturdy fare and up to 12 beers: six regulars and four to six rotating specials. It’s a big variety, offering something for all tastes, and all the more impressive given their tiny one-barrel system; brewer Chris Tilley brews twice a day most days in order to keep up with demand. The Adams’s plan to expand soon, both to a seven-barrel system and another offshoot brew pub in Greene county, but Amber says that the small system is conducive to experimentation: “with small batches, there’s freedom to try something new without worrying.”

The Skytop steakhouse in Kingston and the Hyde Park Brewing Company across the river are both owned by Joey LoBianco. John Eccles, the German-trained brewer, makes ales and lagers with finesse. Each establishment offers six different beers, with one in common: the Winkle Lager, their flagship, which LoBianco hopes to have in bottles in the near future. Though different, LoBianco says, the two lines run the same gamut: a very pale Helles (straw-blond, German-style lager), the Winkle lager, something red, something big and bitter, a seasonal beer, and one of three rotating black beers. Each example is distinctive, and well suited to pairings with the food. Hyde Park makes about 750 barrels a year, and Skytop roughly half that, and since the beer never travels it goes directly from vat to tap. This is a central benefit of drinking beer where it is made; there’s a freshness to the product that is simply not to be found in a bottle. Beer is better on tap. And on tap for summer 2010, Crossroads Brewing Company will open in the former Brooks Opera House in Athens.


Suds are the best disinfectant

It’s worth observing that many of these businesses are fairly new, and thinner on the ground than sudsier parts of Vermont or Massachusetts. Theories for why this is the case center on the complex regulatory hurdles surrounding alcohol in New York State. With layers of ambiguous and even contradictory laws dating back to prohibition, the state liquor authority currently under investigation for bribery and corruption, and many applications for licenses taking 10 months or more to be approved, it’s easy to see how a streamlined system might help us enjoy still more local beer. Granted, none of these breweries use much in the way of local ingredients. Without a malting facility, and with no large-scale hops production, it’s not even an option, though most producers expressed a desire to have local sources. But the products are excellent, and when served fresh from tap or growler they make for the best possible drinking. And the jobs they create are local, and politicians care about jobs. And, if memory serves, politicians are meant to occasionally make or change laws to improve the lives of their constituents. So, hedonism and activism can be productively combined: think globally, drink locally.