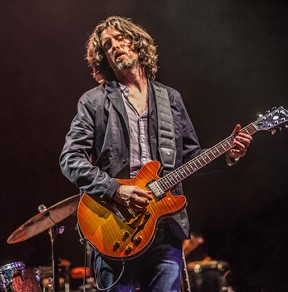 On Tuesday, I posted here about “Poison,” the new single by the Mammals (whose sales benefit effort against the opioid crisis). Today, let’s check out the title track of Saving Grace, the new album by their fellow Woodstock-area musical staple Scott Sharrard. It’s a song that, like the aforementioned Mammals tune, deals with one of today’s most serious health issues—in this case, mental illness.

“Like others, I’ve struggled with anxiety and depression my whole life,” the guitarist, singer, and former musical director for the late Gregg Allman tells Billboard. “And I’ve struggled to do that while trying to be a fully functional husband and father. In the end, this song is about losing the plot and diving into despair full stop. I think it’s a song about suicide really, about feeling so hopeless that you’re ready to slip and let go.” Recorded at the historic FAME Studios in Muscle Shoals, Alabama, the song features Sharrard playing Duane Allman’s storied 1957 Gold Top Les Paul, on loan to him from the estate and played on record for the first time since Duane’s 1971 death. The album also includes Gregg Allman’s last known original composition, “Everything a Good Man Needs,” which features a guest appearance by Taj Mahal.

Listen to it here, and enjoy the song’s enchanting animated video:

Saving Grace is out now. For more information, visit https://www.scottsharrard.com/home.